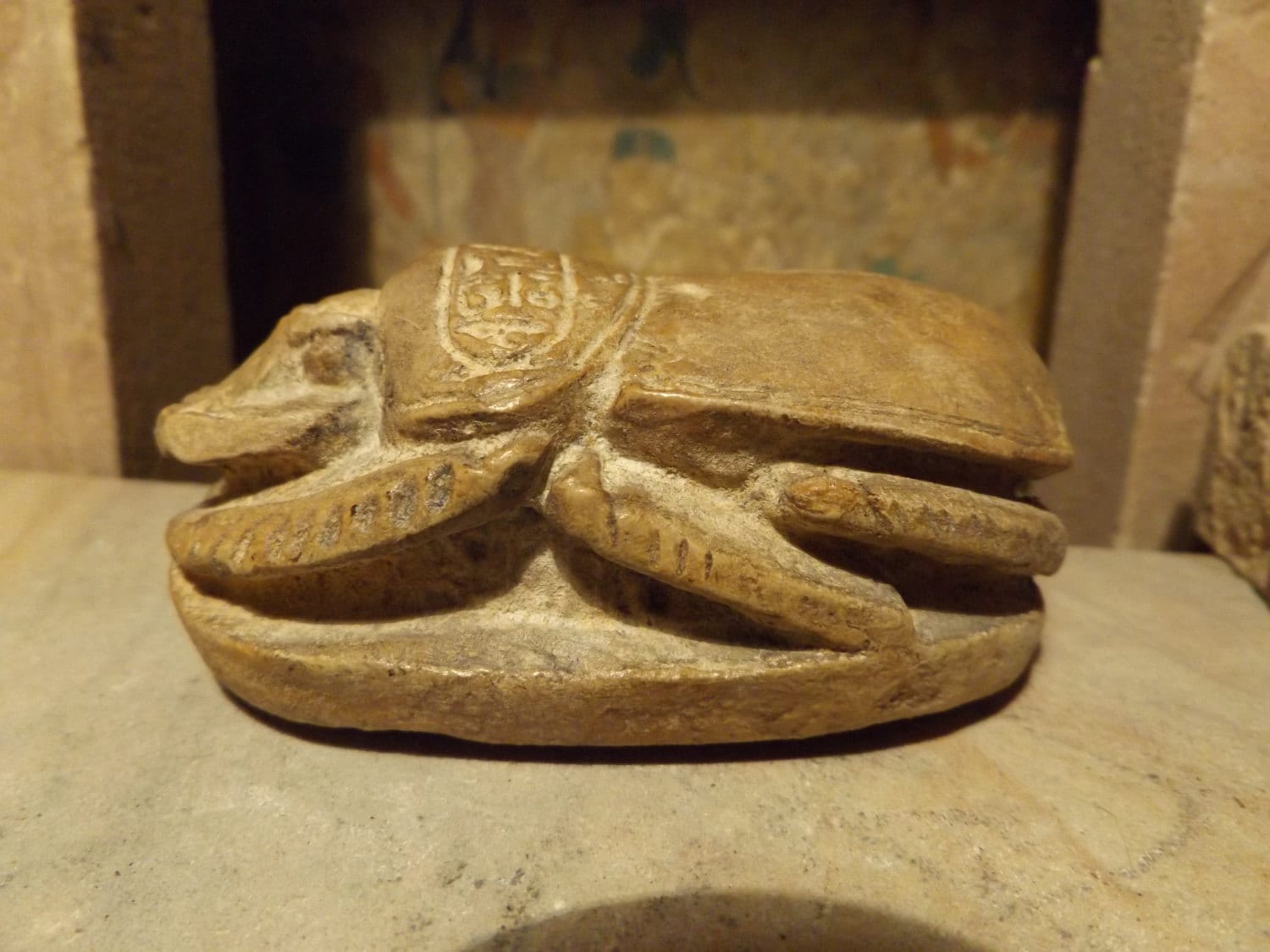 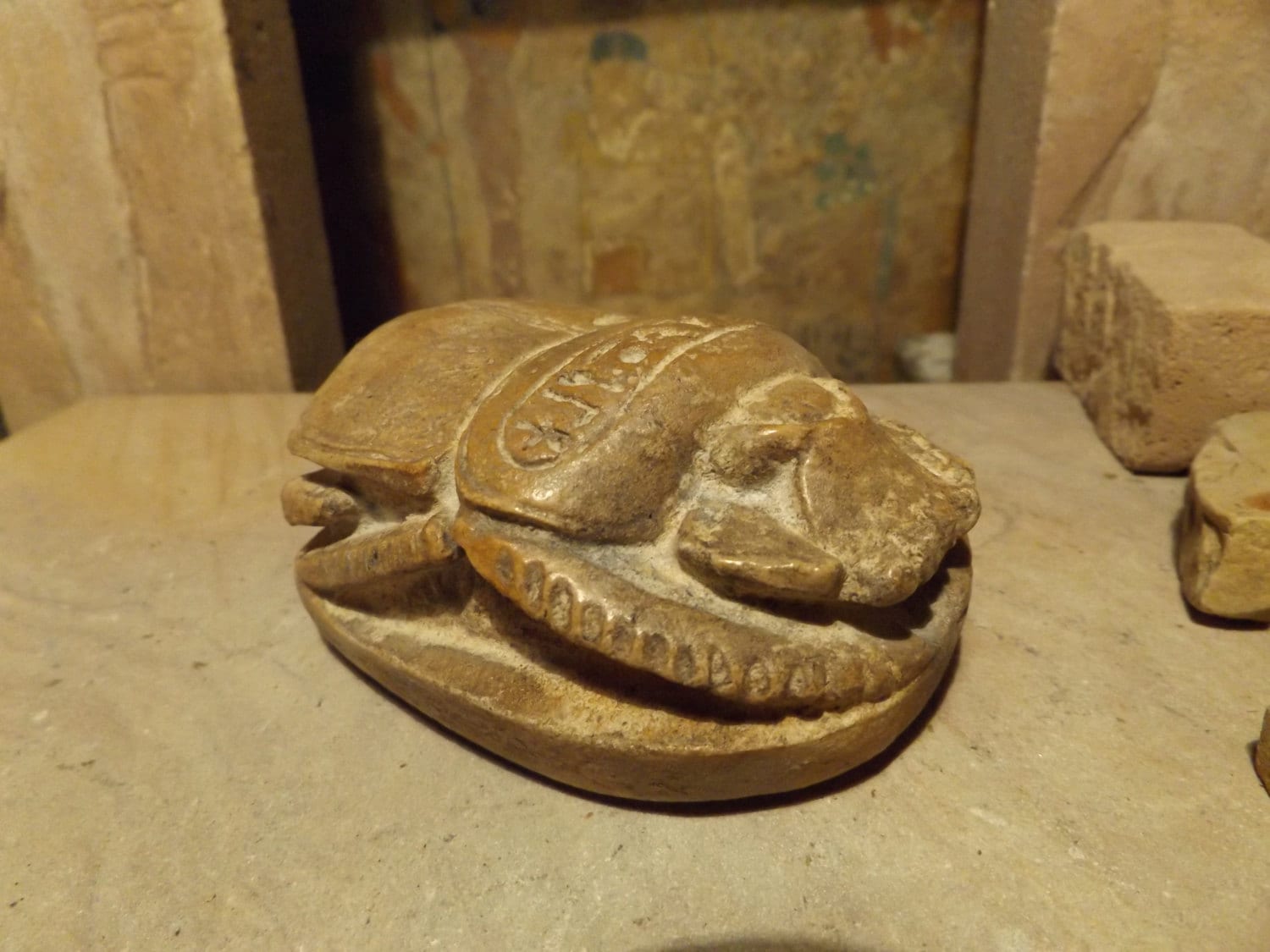 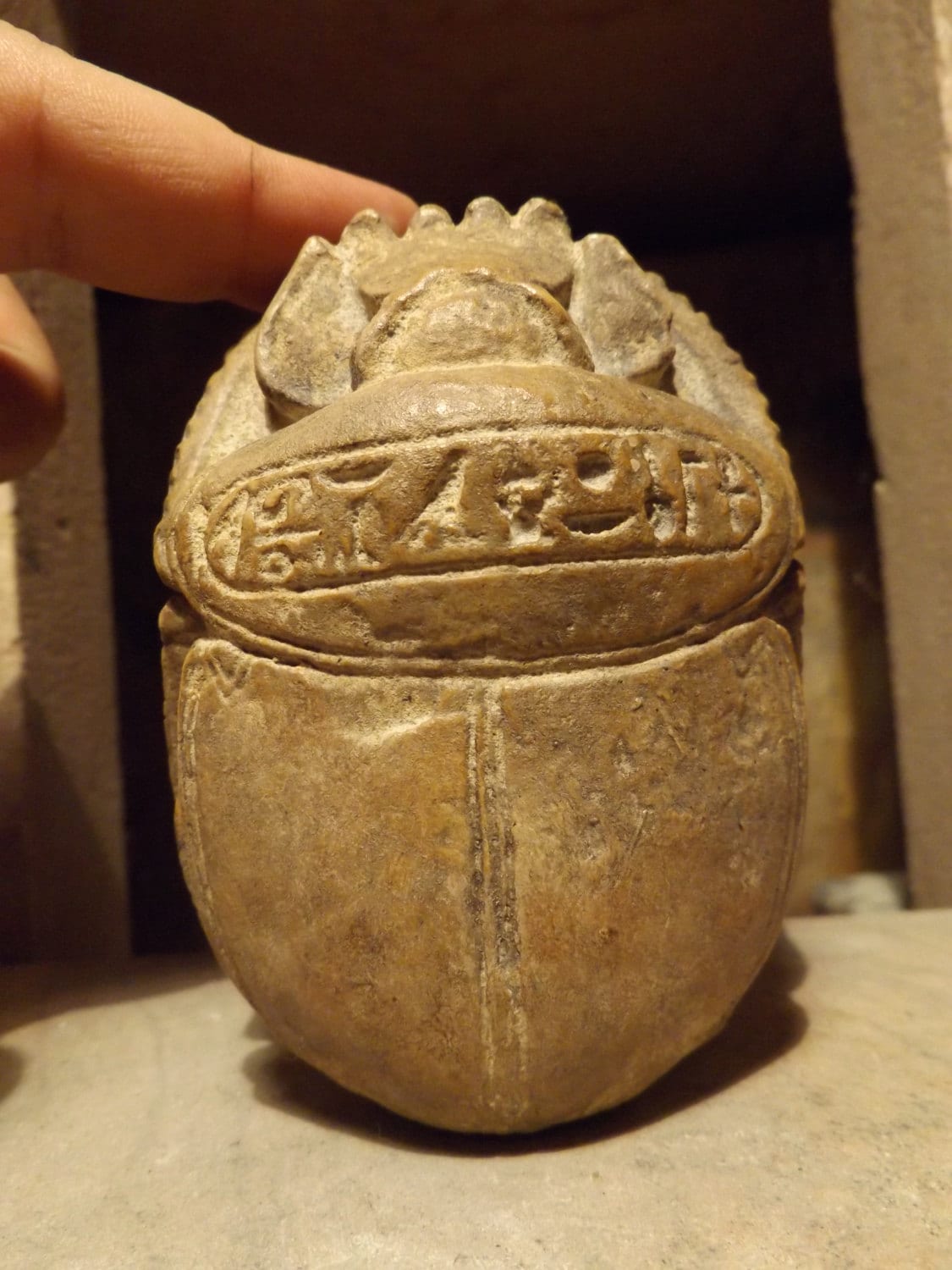 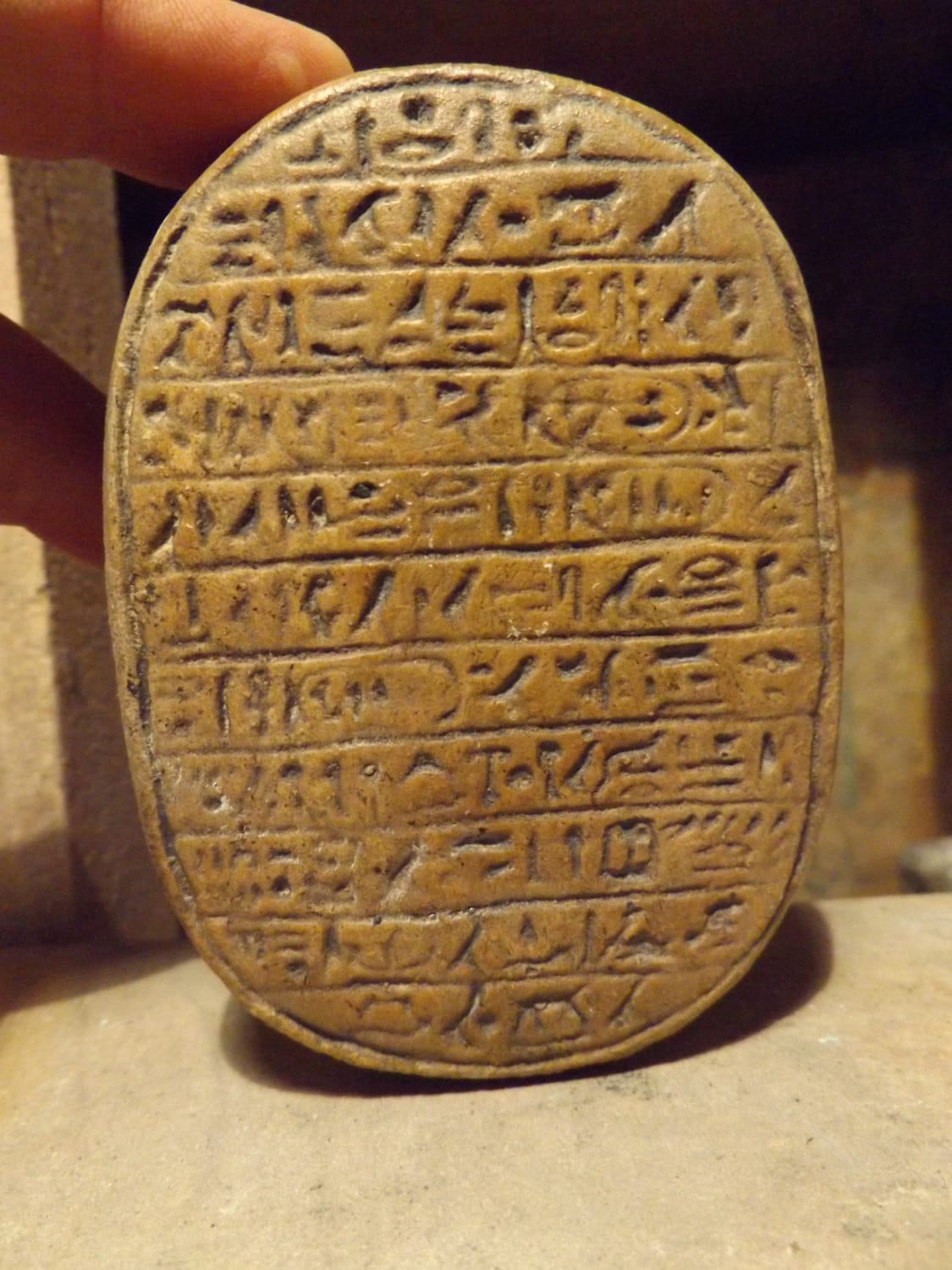 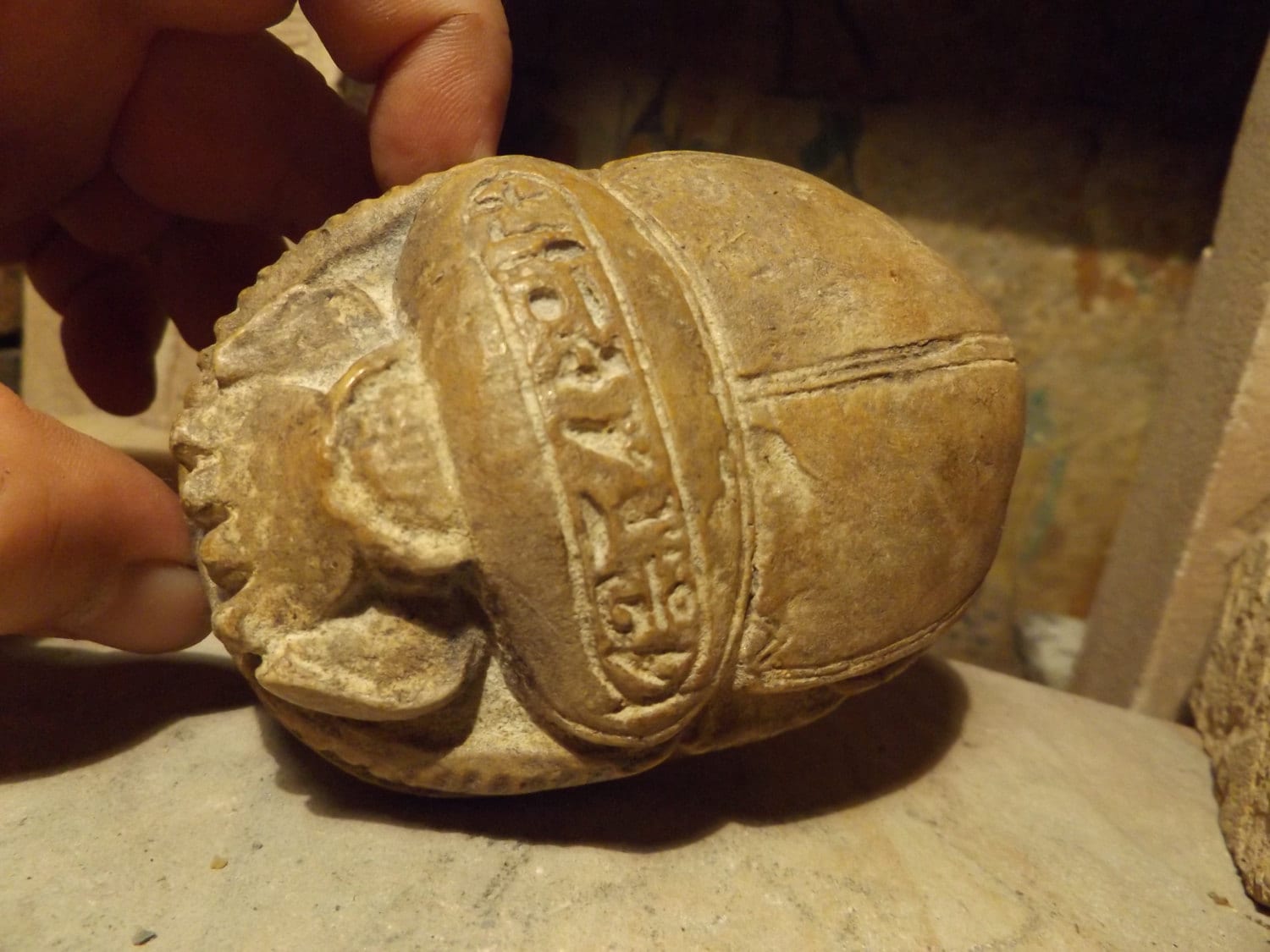 On offer here is a fantastic example of a scarab amulet replica and the largest in the collection.
*Combined postage offered

This scarab has a very nice form and is made of a limestone and quartzite composition stone. It has a well developed aged ochre colouration with a light polish. Fine details of hieroglyphic inscriptions can be seen on the back, on the side and extensively underneath. * Translation of hieroglyphs - see below.

Not all scarabs were designed to be worn, or placed with strategic purpose on a mummy, such as the heart scarab.

Certainly they were a universal symbol of renewal, regeneration and rebirth but in this example and others in the series, they were used very differently. In a way the messages carved into them were not unlike a newspaper advertisement or if you like, a brief e-mail via scarab.

This scarab is known as one of the 'lake series' scarabs which were made and sent to various parts of the kingdom to announce the construction of a lake that Amenhotep III had made for his great beloved Queen Tiye.

Essential information - The lake was constructed very late in year 11 of the great king’s reign in the district of Dja-rukha. This was no ordinary cattle dam. This was a major earth moving construction project that would funnel water some distance from the Nile via a canal to feed a basin 1200 feet wide and over a mile in length.

An estimated 250 thousand workmen were put to work during the off season and within 16 days early in the 12th year of Amenhotep’s reign, the Pharaoh most likely partook in the ancient ritual of breaking the levee and allowing water to pour into the new lake for the first time.

The canal was wide enough to take the Royal barge on opening day which is exactly what has been documented. Perhaps he didn’t break the levee. Someone else may have been charged with the honour (Amenhotep son of Hapu?) and he may have just sat on the barge waiting for the moment when the sudden, mighty man made current would whisk him forward with the speed of a Nile flood.

What we do have for certain is a name for his boat, ‘the splendour of the Aten’ or ‘the illuminated disc’ depending on which of the many translations you prefer that are published. This naming of the Aten or solar disc curiously hints at his involvement in the promotion of the emerging solar cult of Atenism. His son took the Aten to a heightened level of devotion incorporating the very name of the god into his own name. He changed his name from Amenhotep IV to Akhenaten. This showed the established priesthood of Amun the strength of his allegiance to the rising sun god.

I am certain that when Akhenaten came of age and learnt the story of the lake construction, he would have been well inspired to do his own great project. He certainly did just that.

Every new Pharaoh lived in the shadows of age old monuments of great kings past. Each new king was compelled to leave his mark and Amenhotep III was no different but he left such a magnificent legacy at the very height of Egyptian power and excess.

He was one of the most prolific creators of monuments Egypt had ever known, rivaled only by Ramses II in the 19th dynasty.

The original scarab that this replica is based on, was found in the vicinity of the ruins of Buhen, a major fort and town in the far south of Egypt near the second cataract of the Nile. This mighty fort was very sadly lost when the modern Aswan dam was built in the 1960’s submerging the entire region. The discovery of the scarab was thus a very lucky find and it offers insight to how the news of the day could be heard so far away.

The inscription on the back or top of the scarab reads ‘Good god, Neb-Ma’et-Re – ‘One beloved of Horus, lord of Buhen’

The usual names of the king are repeated on the sides of the scarab between the legs.

‘Year 11 third month of Akhet, day 1 under the majesty of Horus: Strong Bull,

Appearing in Thebes, Two Ladies: He who established laws, who pacifies the two

Egypt: Neb-Maat-Re, Son of Re: Amenhotep, ruler of Thebes, given life. Great royal

wife Tiy, may she live. His majesty ordered the creation of a lake for the great royal

wife Tiy in her town of Djarukha.* Its length is 3700 cubits, its width 600 cubits. His majesty celebrated the opening of the lake in month 3 of Akhet, day 16. His majesty was rowed in the royal bark “Aton Gleams” on it’ (splendour of the Aten)