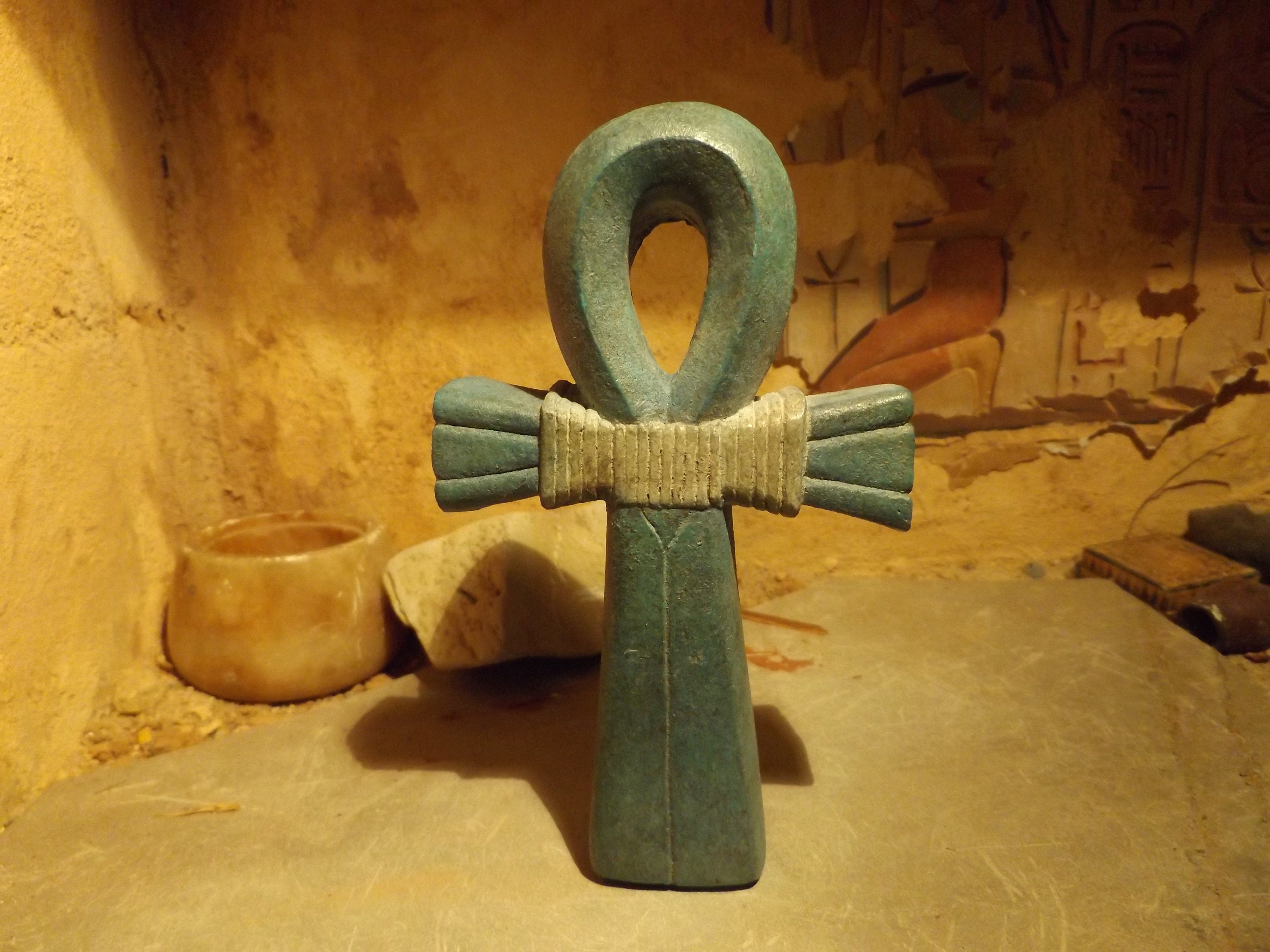 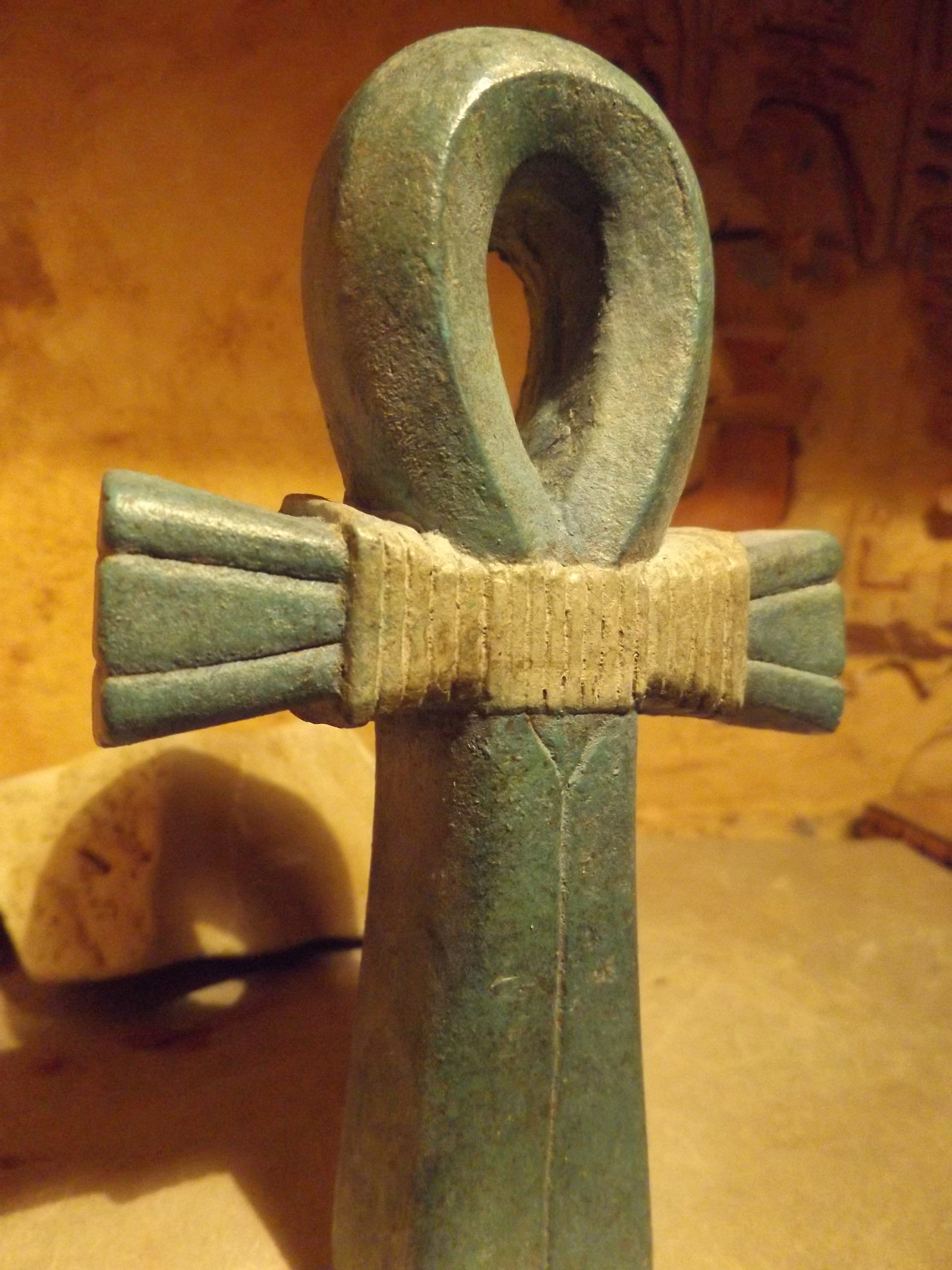 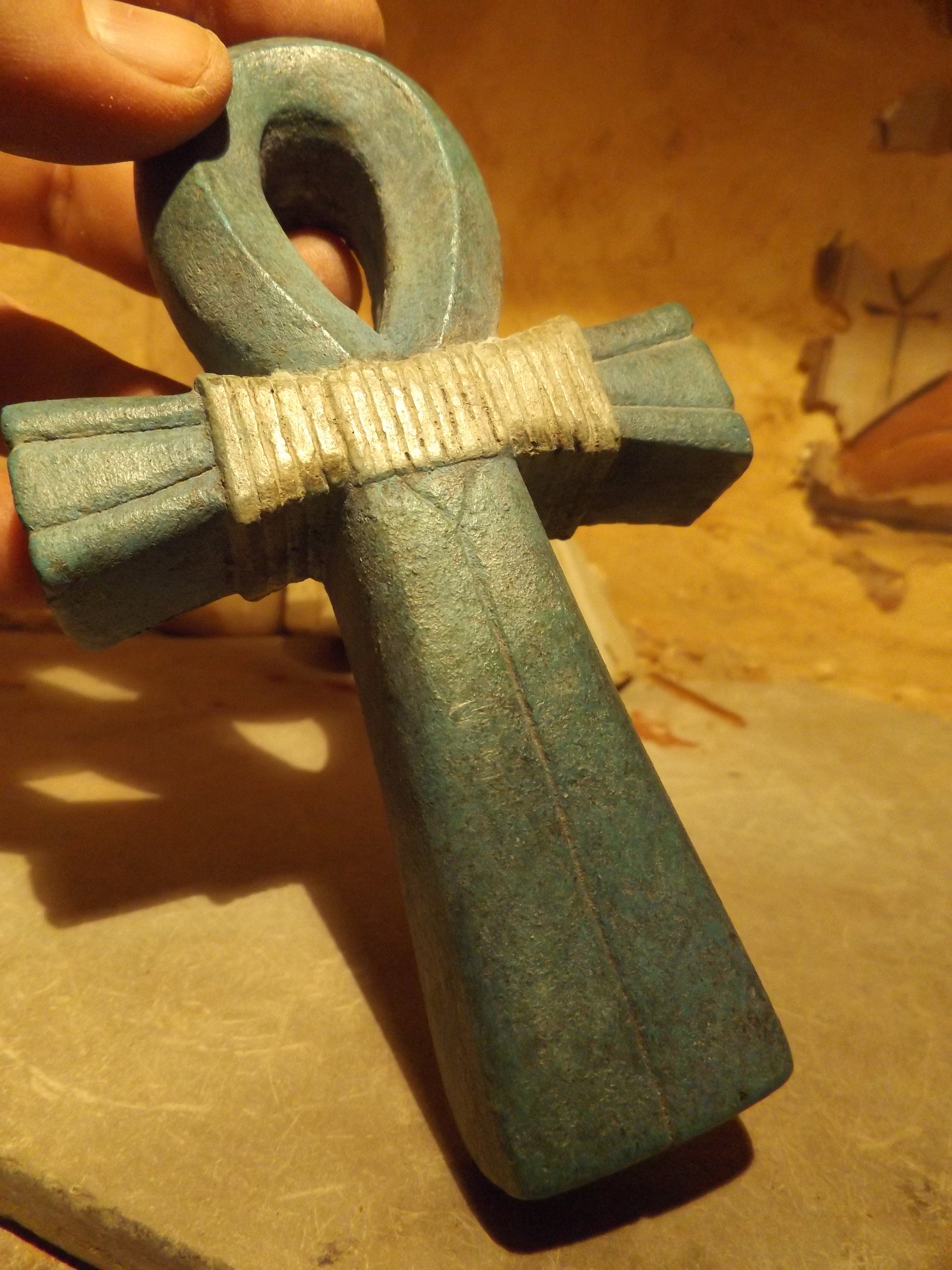 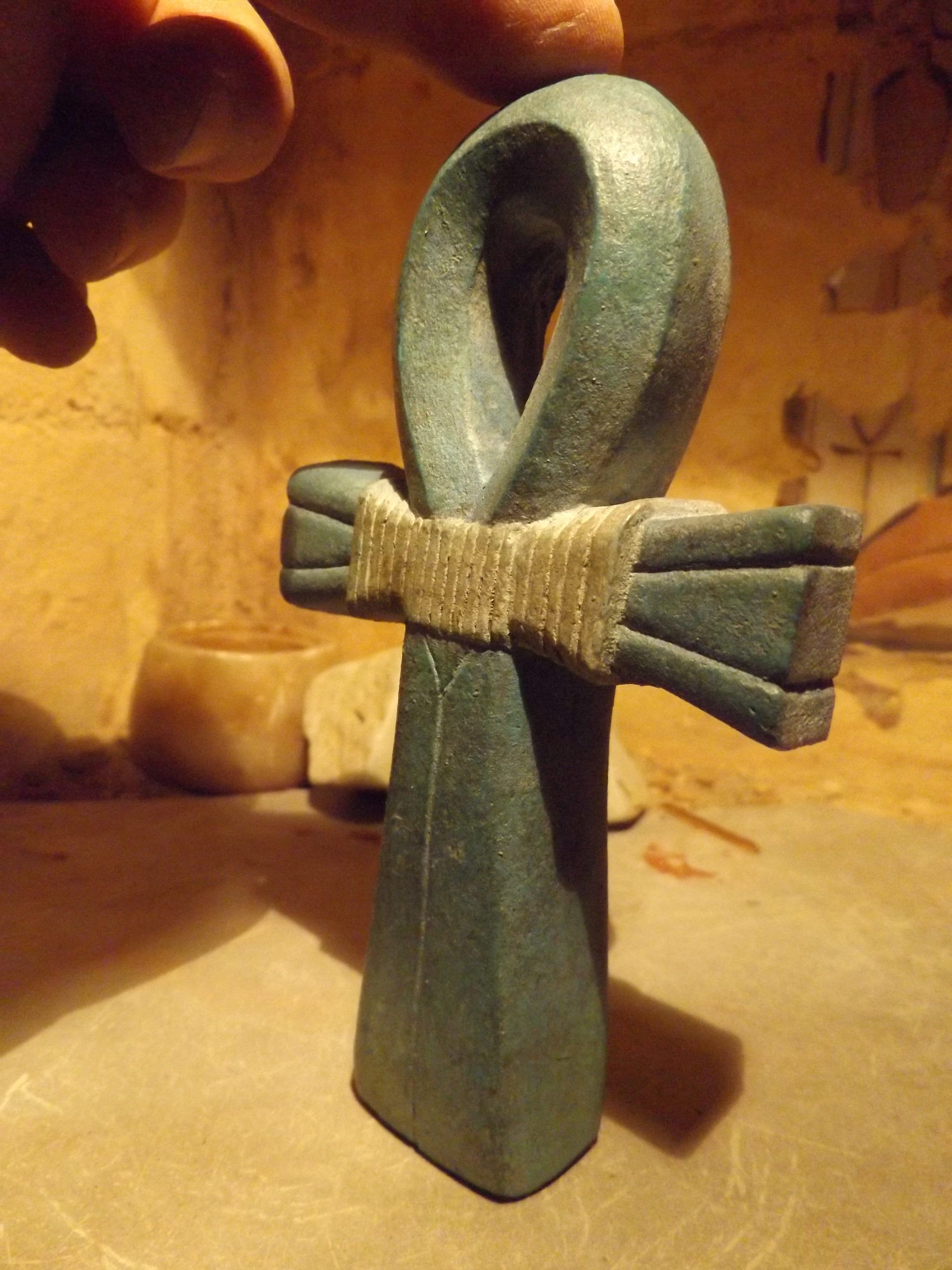 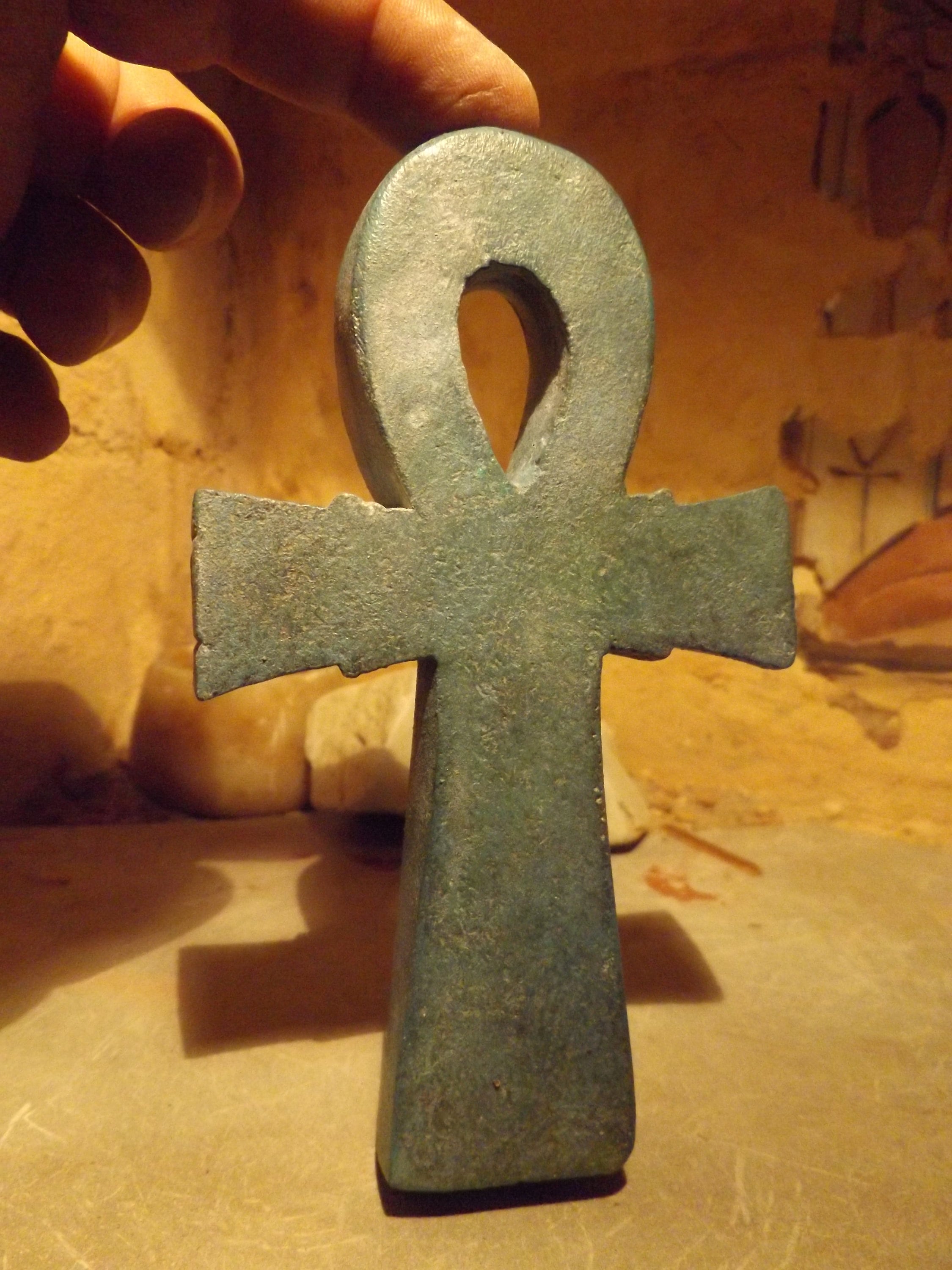 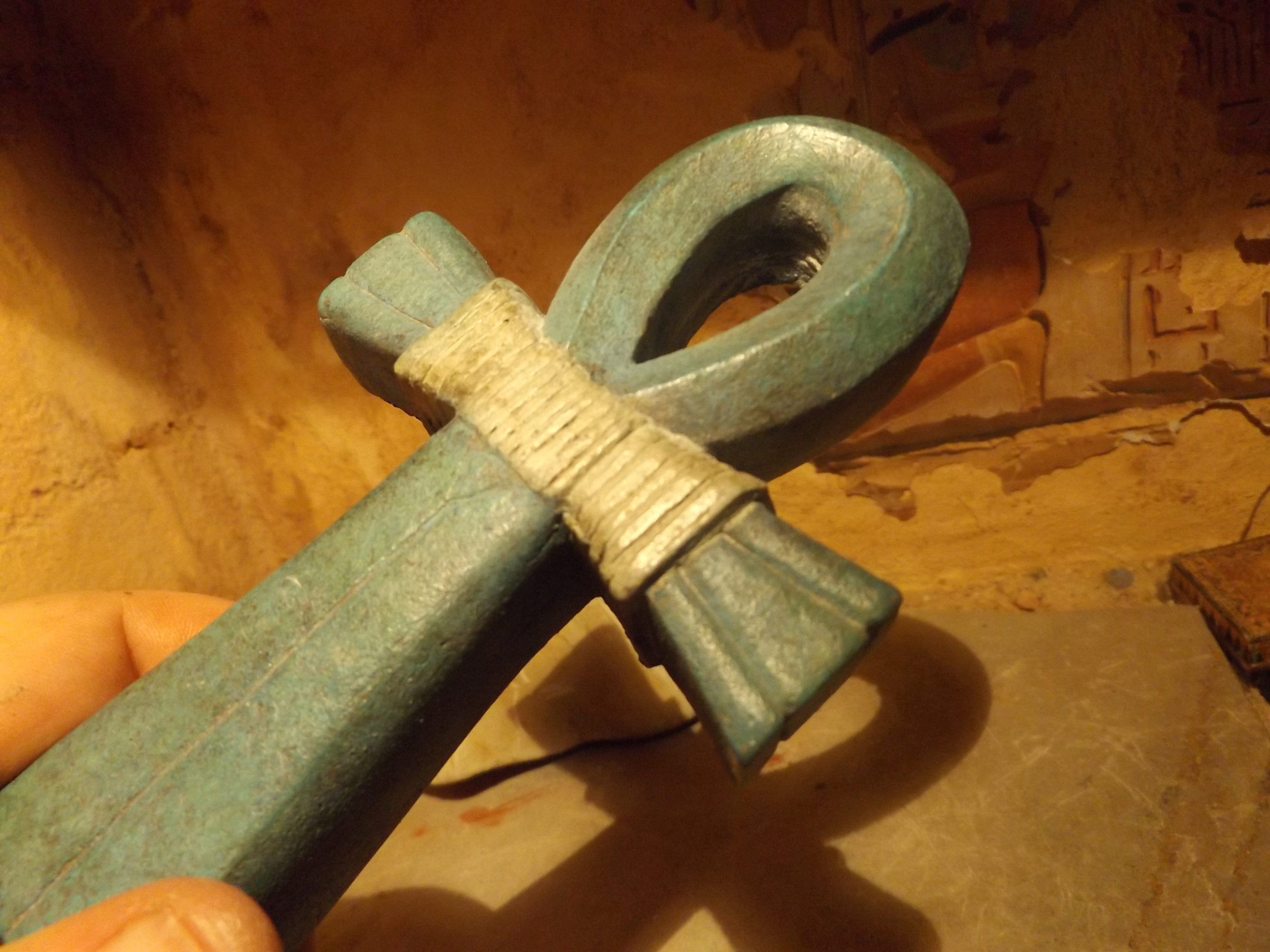 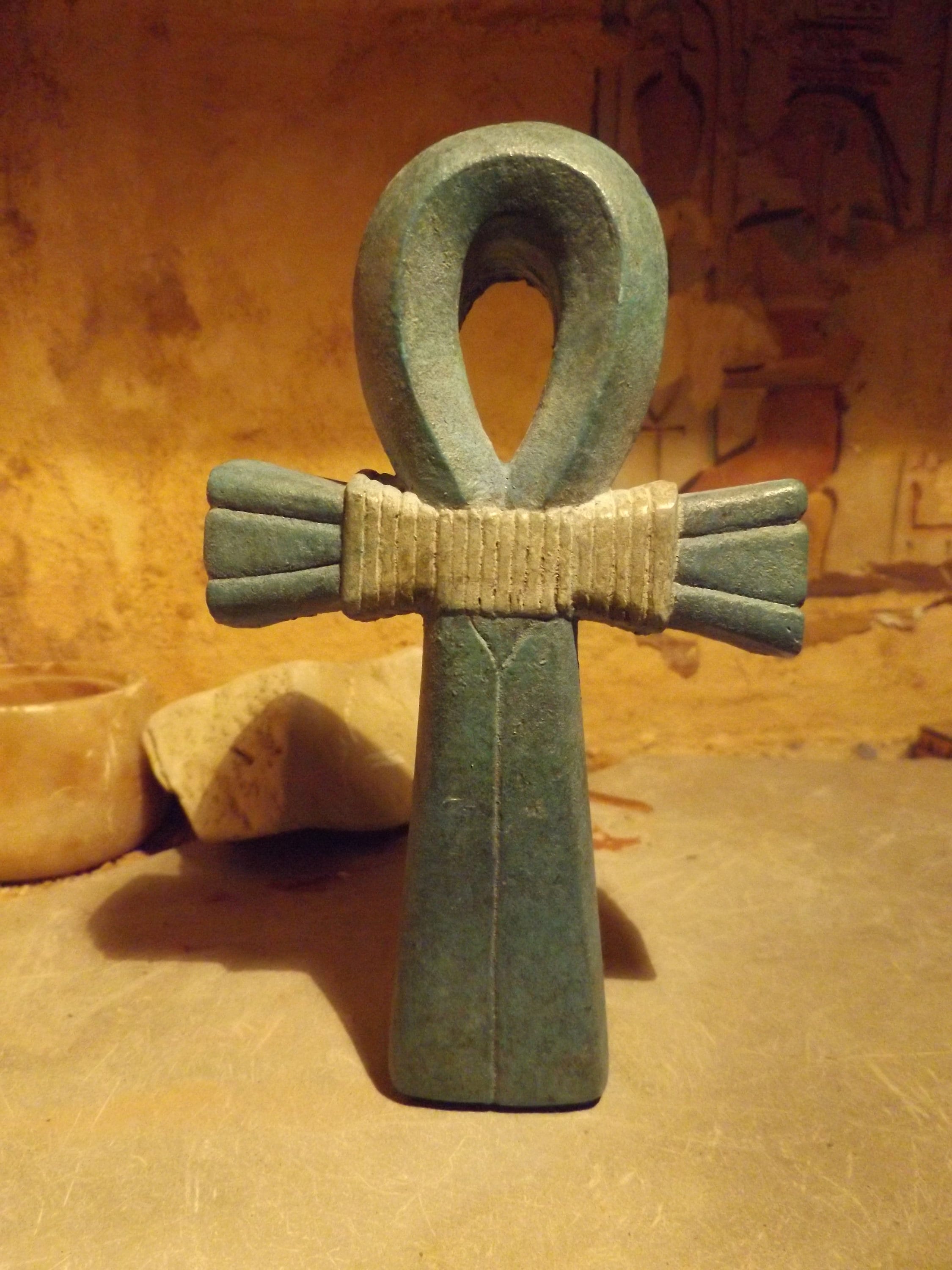 On offer here for only the second time, is my very latest Ankh design which has been a long time coming. This is a signed edition.
The Ankh is one of the most well known symbols of ancient Egypt and is a symbol of life and fertility. Made of a limestone and quartzite composition it has an aged Egyptian blue patina with highlights in white.

The Ankh has ancient origins whose form depicts a particular style of knotted rope. This rope must have had considerable importance to be given such a strong presence in art and literature. Perhaps it represents a token reminder of the very first Knot. The invention of the wheel gets all the attention and it's just a theory of mine that such an ancient revolution could garner such a 'binding' and powerful presence.

* For progress pictures, please see Down under Pharaoh on instagram which shows the evolution of the design taking shape.


Kameron's work's are mostly sculptural both in the round or relief carving with a portion of the work focused on ancient painting techniques. His specialty is the reproduction of ancient Egyptian sculpture however many other cultures are given his particular ancient styling.

His work has been exhibited extensively in Brisbane with current displays in the state museum showcasing some recent works in conjunction with a touring exhibition of Egyptian art from the British museum.

His story and his work was shown on Australian television, and his hand made sculptures sold across Australia, and to overseas destinations such as New York, London, Iceland, India and Switzerland. Many of them are used as decorator items for interior design or as whole feature walls. The strength of his commercial work stems from the ancient realism that he gives his pieces.


But it was when Kameron's father brought home a large book that was filled with many different ancient cultures that he fell in love with Egypt. As a child, Kameron tried to emulate the past by carving images into the stones and forming clay figurines. As a teenager he was Pharaoh, high priest and artisan whenever he visited his grandparents remote property. This was his imaginary empire and at this most special and sacred place he really learnt to carve. Small sandstone cliffs were transformed to become the home of larger than life sized Pharaonic heads, small pyramids were constructed for his royal pets while non royal pets were merely given a small sealed underground chamber.
Artworks were created exclusively for burial and accompanied the many mummified fish and birds as well as un-mummified cats and dogs. It was an unconventional subconscious learning experience. He never thought he would take it further than the fields, but now it is a full time occupation which sees his work going all over the world, even making pieces of authentic "museum quality" reproductions for Warner Brothers, and 20th century Fox film sets.


In the art of sculpture Kameron is self-taught. Over the years, he has created a range of realistic ancient sculptures with an attention to detail that makes the work look as though you have just unearthed it from an archaeological site … and that is the difference. Some of the world's leading archaeologists have viewed Kameron's work with interest comparing it favourably with the artists that lived in Egypt's ancient capital of Thebes. He has also had the privilege to restore some antiquities matching form and colours exactly to suit, such as a relief sculpture from the tomb of King Seti the first. It was actually a cast made by notorious adventurer Giovani Belzoni for an exhibition in London in the 19th century to show the world for the first time the distinctive style that is Egyptian art.