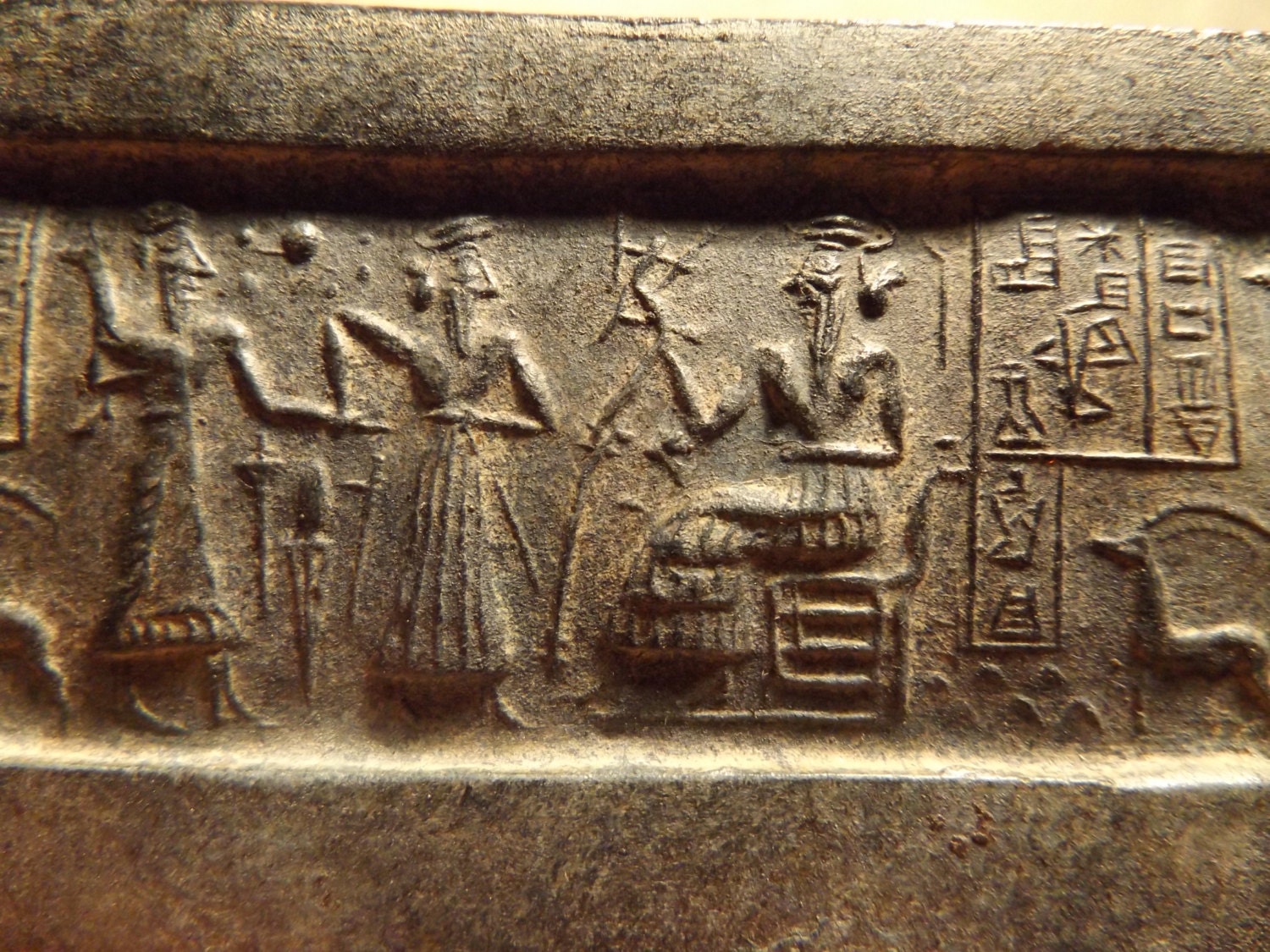 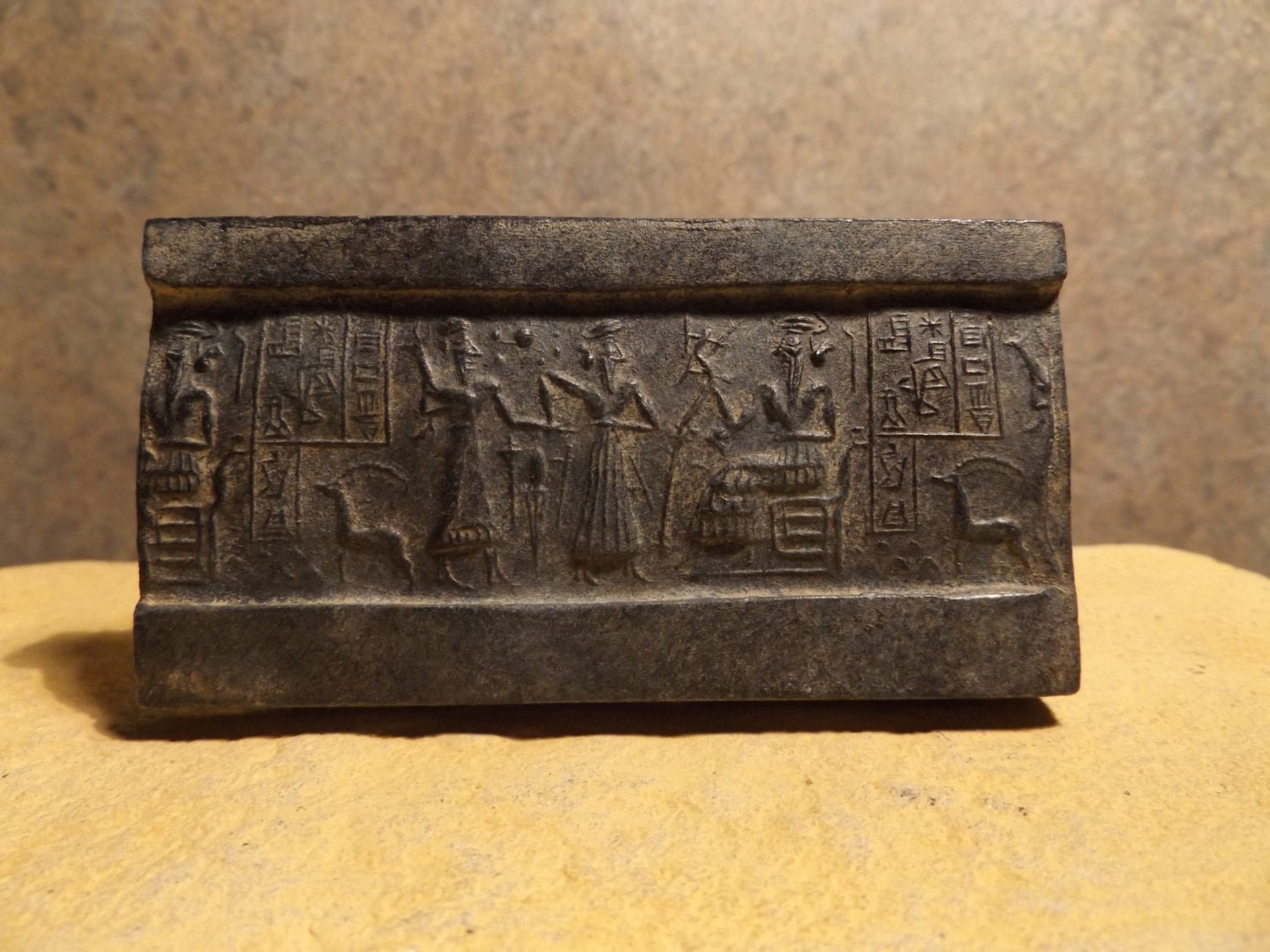 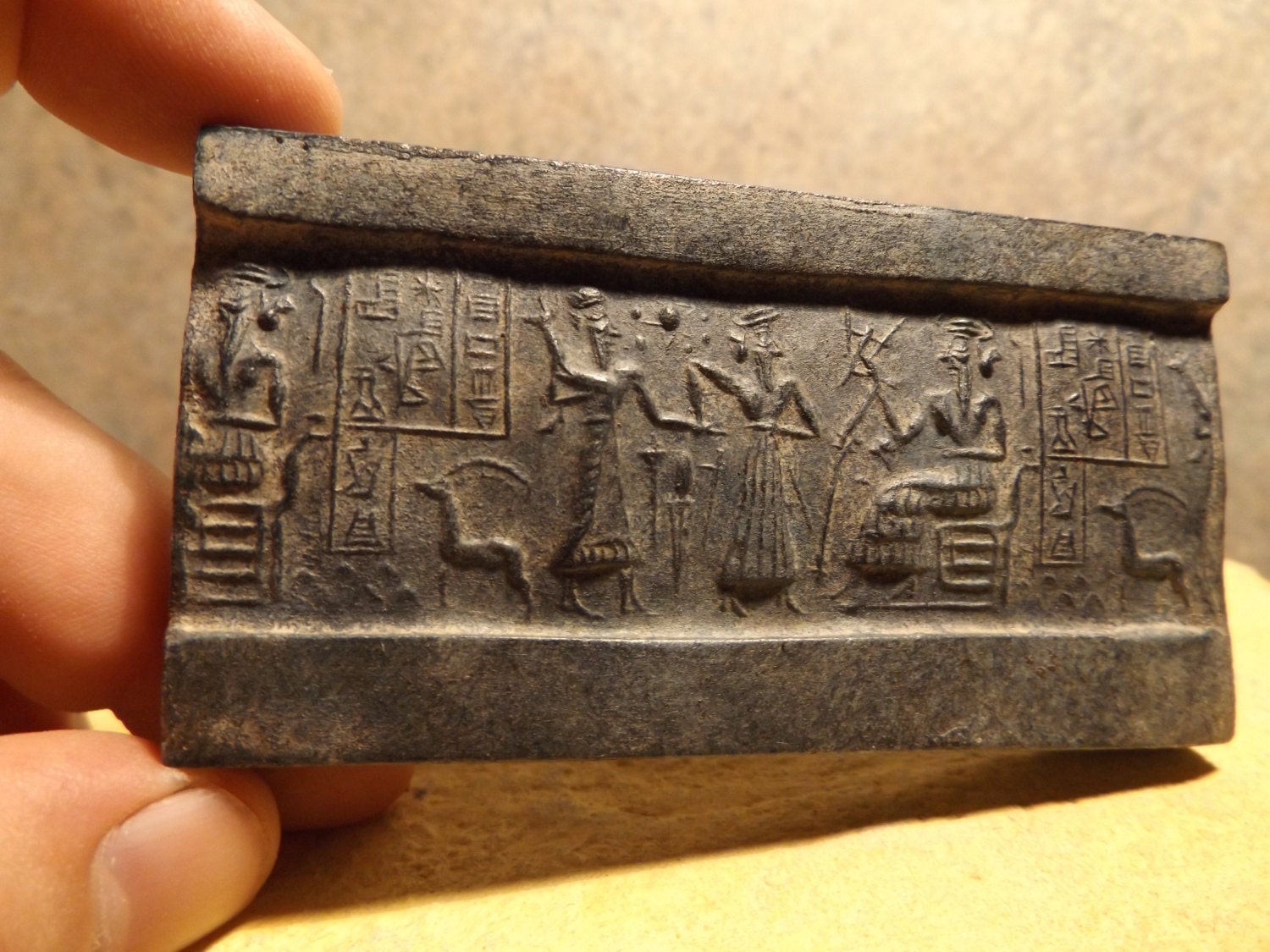 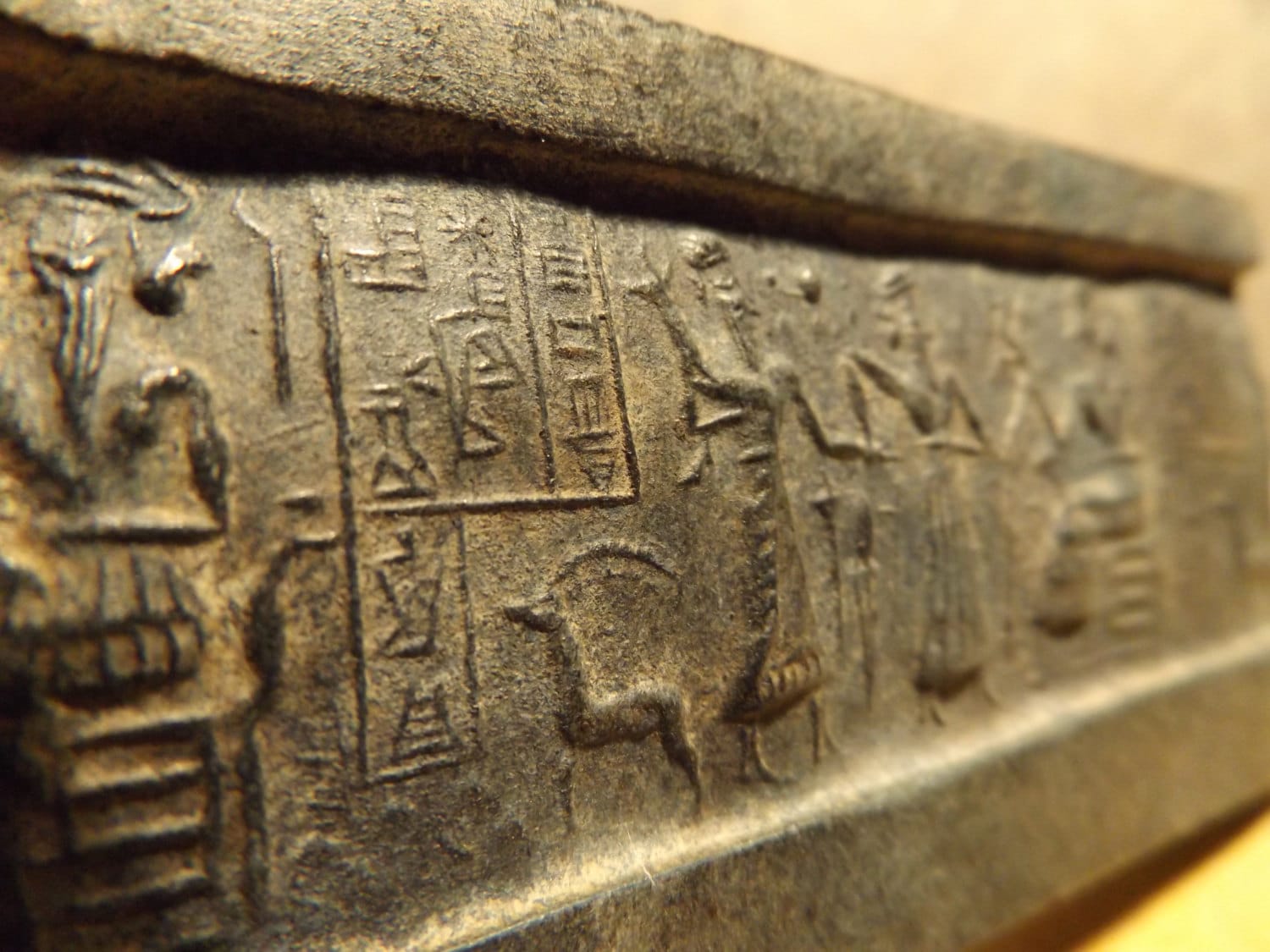 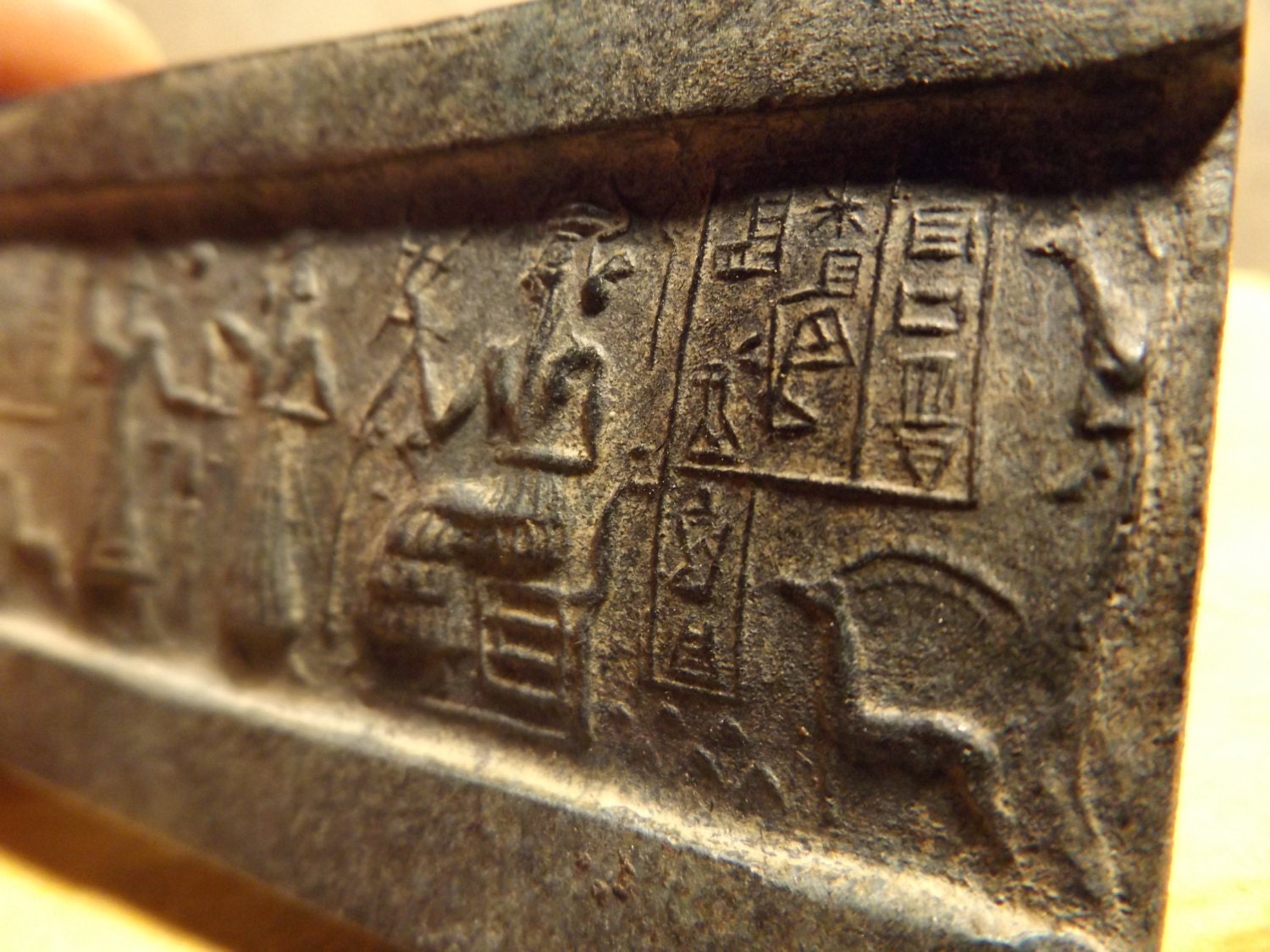 Dimensions :-
Length - 10 cm / 4 inches
Height - 5.5 cm / 2-1/4 inches
Made of a limestone and quartzite composition stone this piece has an aged slate black patina with a light polish.

On offer here is a replica of one of the most well known and controversial of all Sumerian cylinder seal impressions.

This notoriety is based on the interpretation of the celestial imagery above the two standing figures and the seated deity. What looks like a sun is being orbited by more planets than the Sumerians actually knew about. They didn't have the concept of planets and instead called them 'wanderers' - special stars. They only knew 5 of these wanderers as telescopic devices were not yet invented to enable one to see the rest of our solar system.
What scholars who specialize in Sumerian seals interpret the image as, is the frequently depicted constellation of Pleiades.

The alternative view of Ancient Alien theorists, is the intervention of extra terrestrials who visited Earth in ancient times and brought the wisdom of the stars and planets with them.
This is obviously an exciting theory for some but essential facts need to be observed when considering how to view this seal in the context of the abundant other examples. The 'sun' in this image doesn't correspond with the standard depiction of the sun in the majority of other Sumerian artwork and is more likely to signify a bright star among stars in a constellation. As mentioned the Pleiades constellation is the most likely candidate.

The cuneiform inscription present on this impression has been translated and reveals a considerably simple statement as follows: 'Dubsiga, Ili-illat your/his servant.'
Ili-illat is the name of the seal's owner while Dubsiga is the name of a powerful individual and is the figure leading the owner into the presence of the god.

The offering of a goat to a fertility deity is the principal message being conveyed here but the fascinating inclusion of the astronomical details opens the door for several interpretations as we strive to understand the ancient minds and how they saw the universe in that distant time.