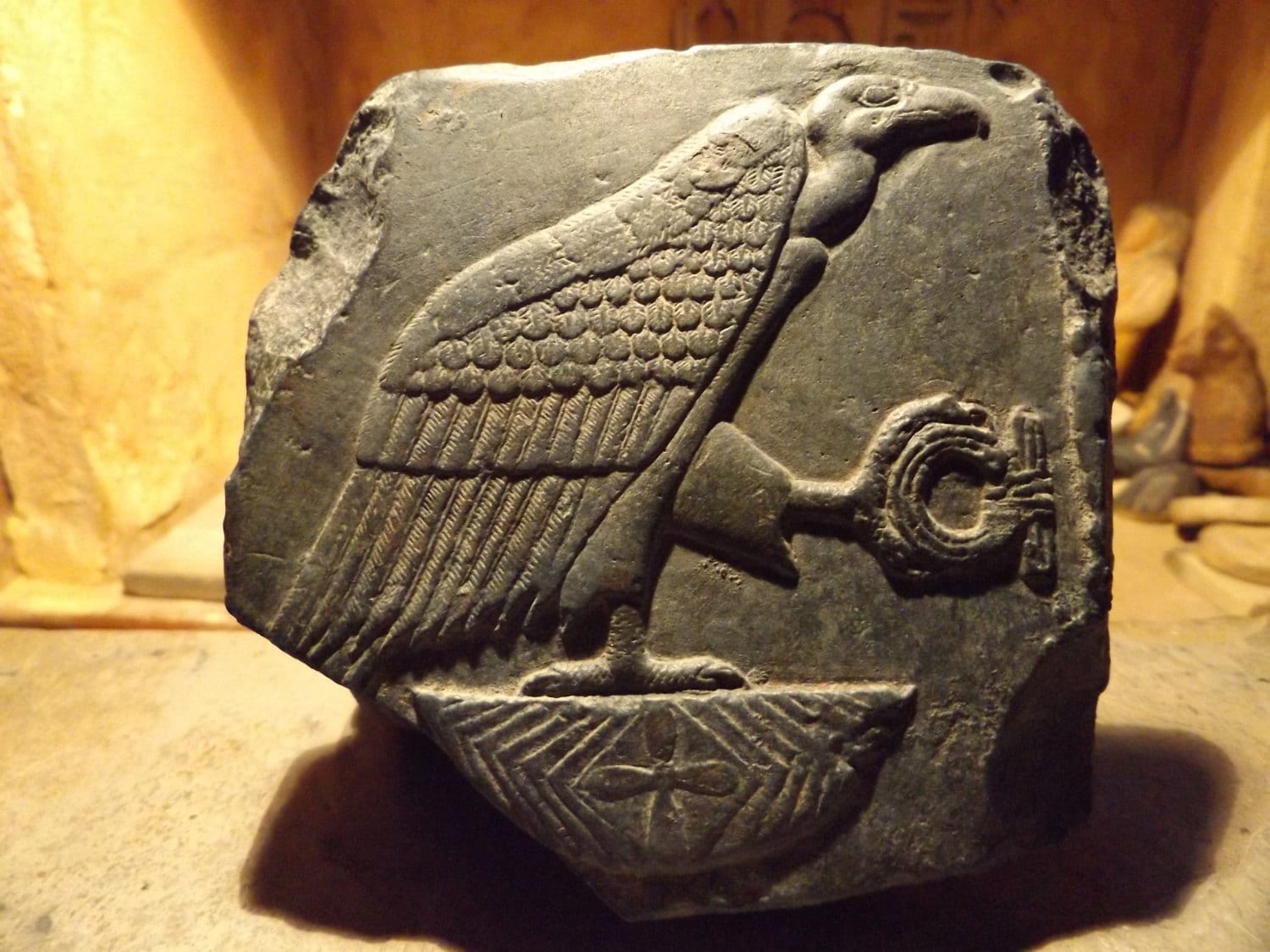 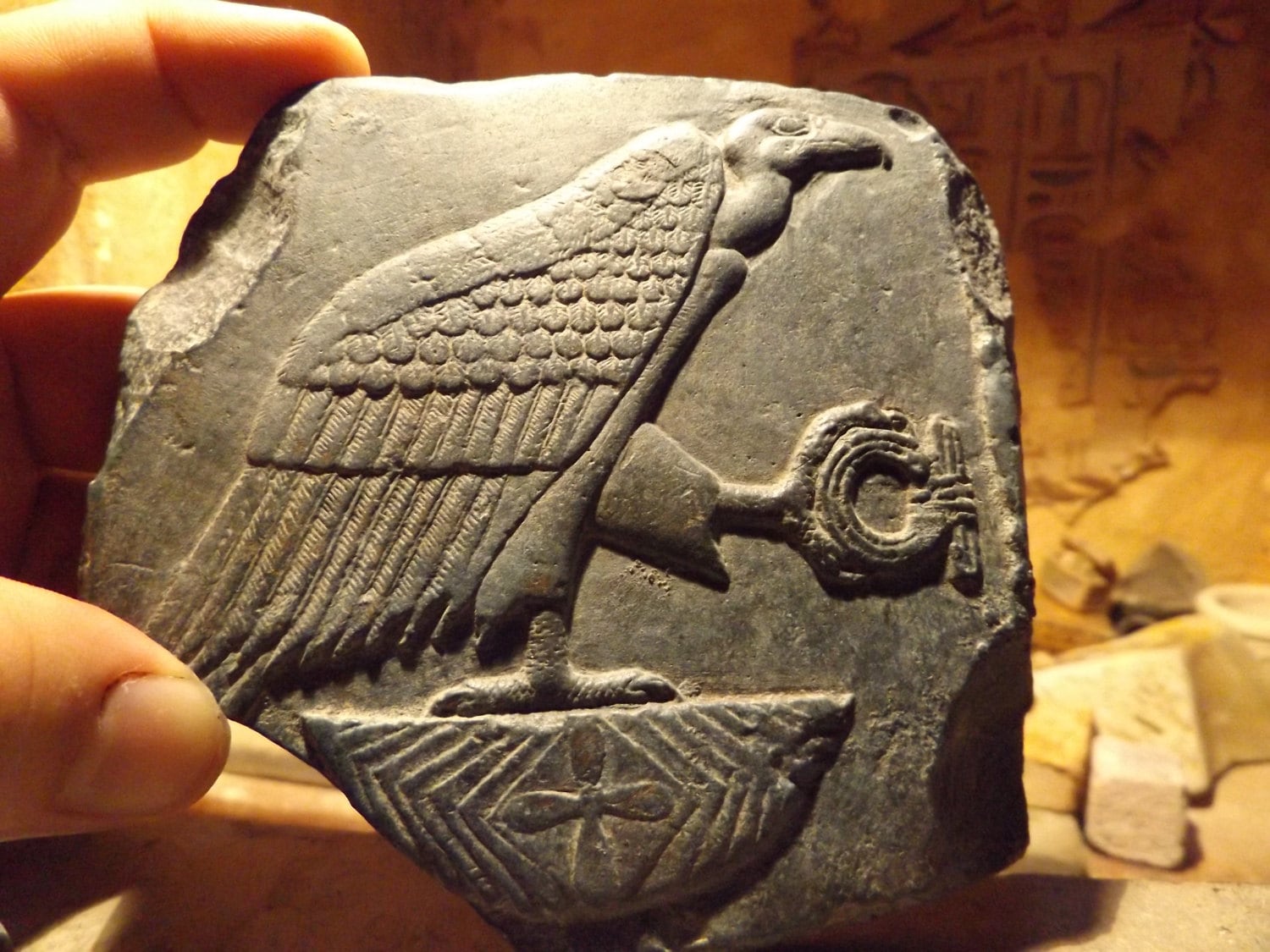 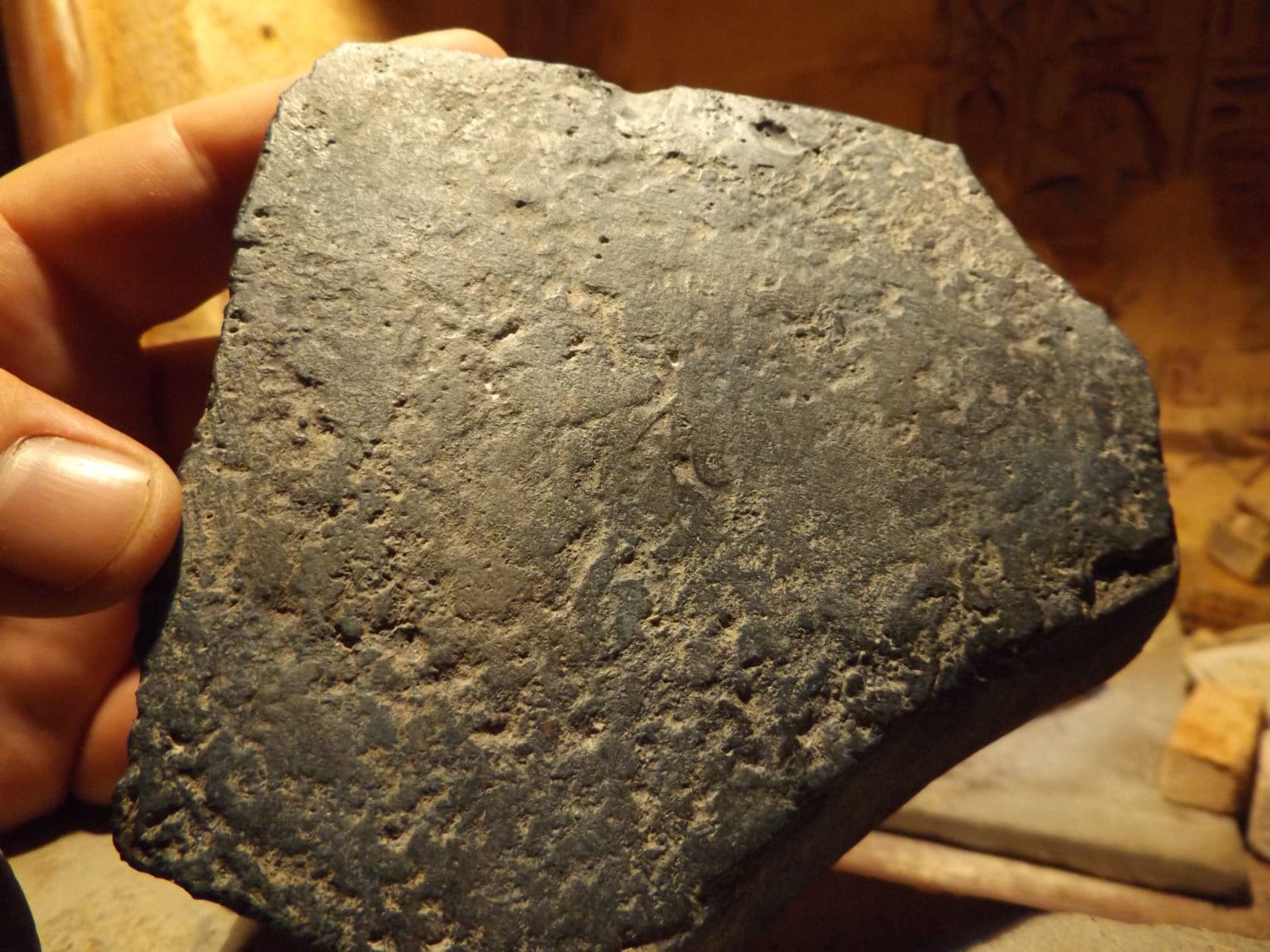 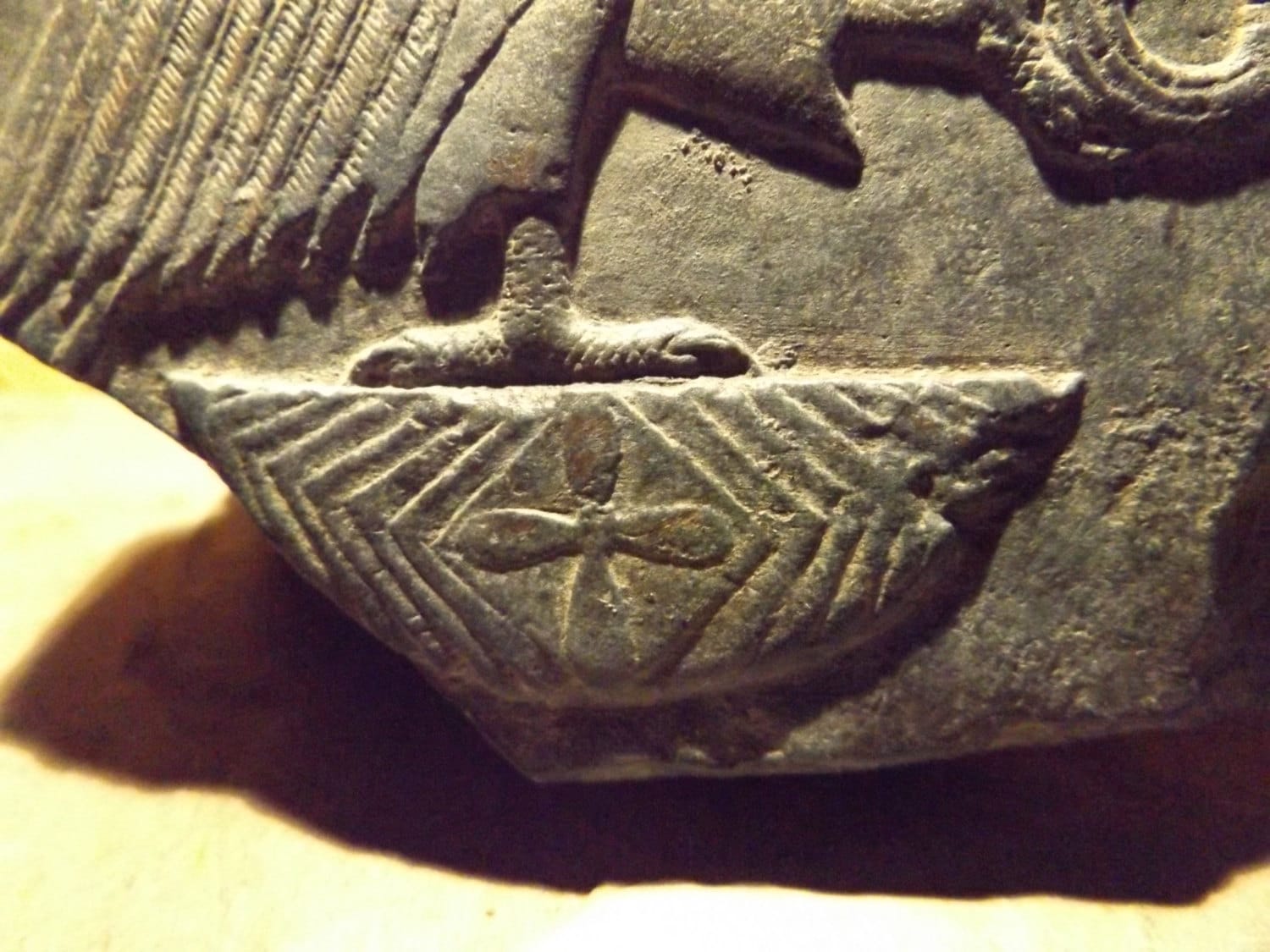 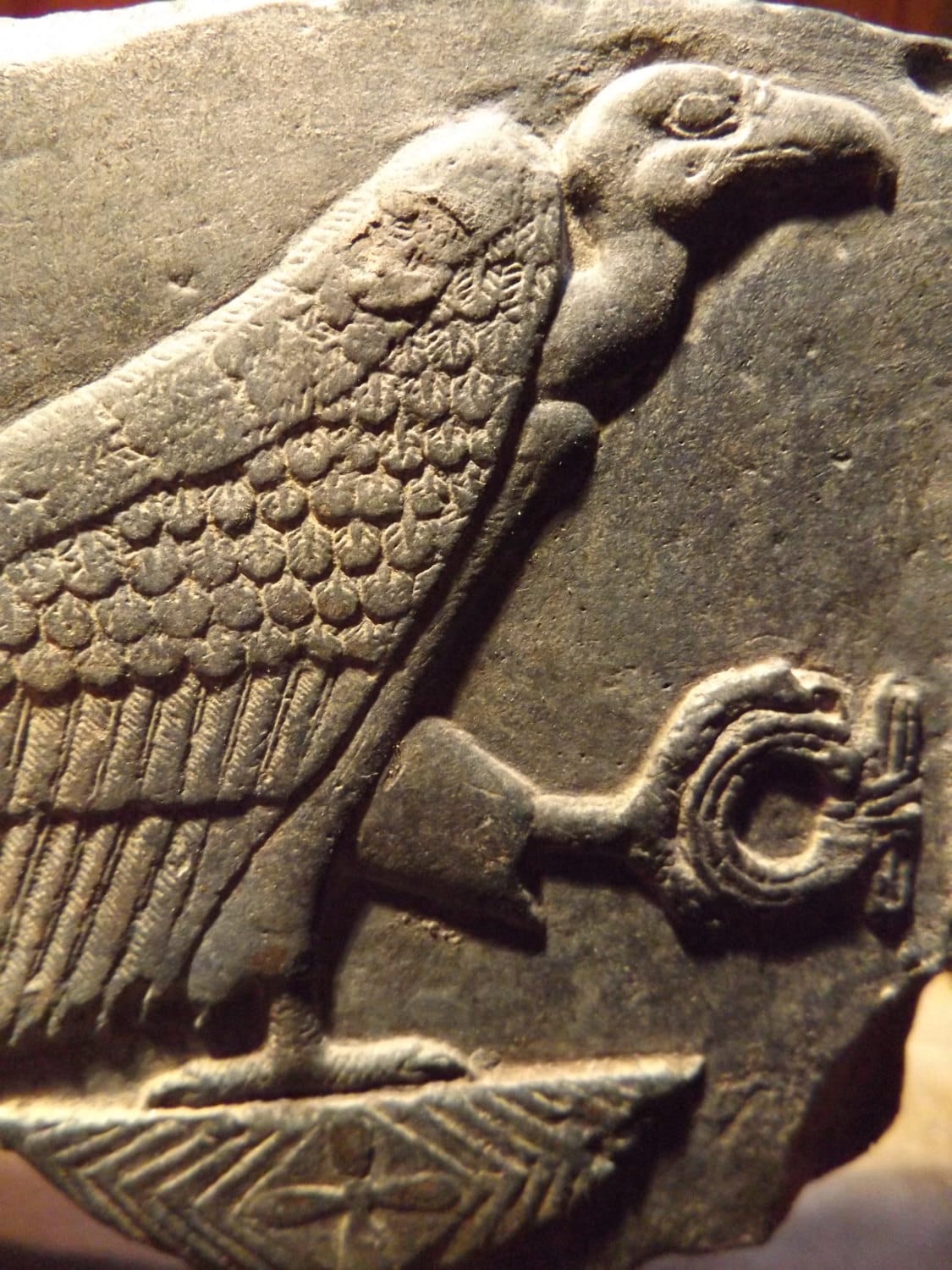 On offer here is another rare replica fragment featuring the vulture goddess Nekhbet grasping the 'Shen' symbol in her talon. The Shen ring is another of many protection symbols but it particularly represents eternal protection.

The stretched form of the Shen is known as a cartouche which is filled with the hieroglyphs of a king, queen, goddess or god's name.

Nekhbet or the sky god Horus were most often shown holding the Shen and as the patron goddess of upper Egypt, Nekhbet brought this symbol into the mix of a unified Egypt. She was the counterpart deity to 'Wadjet' the lower Egyptian deity and together they were known as 'the two ladies'.

Usually shown resting on a basket - the hieroglyph 'Nb' or 'Nub' meaning lord. When shown as a pair it would be translated as lord of the two lands - upper and lower Egypt.

This fragment likely had a counterpart image of the cobra Wadjet facing her, also resting upon a basket.

Nekhbet was a very ancient deity in the Egyptian pantheon. The vulture was a prominent fixture of the Nile valley and a large bird capable of providing ample inspiration for the deity makers of Egypt's civilised dawn.

If you were a priestess of Nekhbet you were known as the sacred 'Muu' or mothers and would be seen in ritual contexts wearing costumes of vulture feathers.

The oldest shrine known in Egypt is actually devoted to Nekhbet at the site that is derived from her very name 'Nekhab'. Established around 3200-3100 B.C.E.


Made of a limestone and quartzite composition stone this attractive study fragment has an earthy, grey patina.