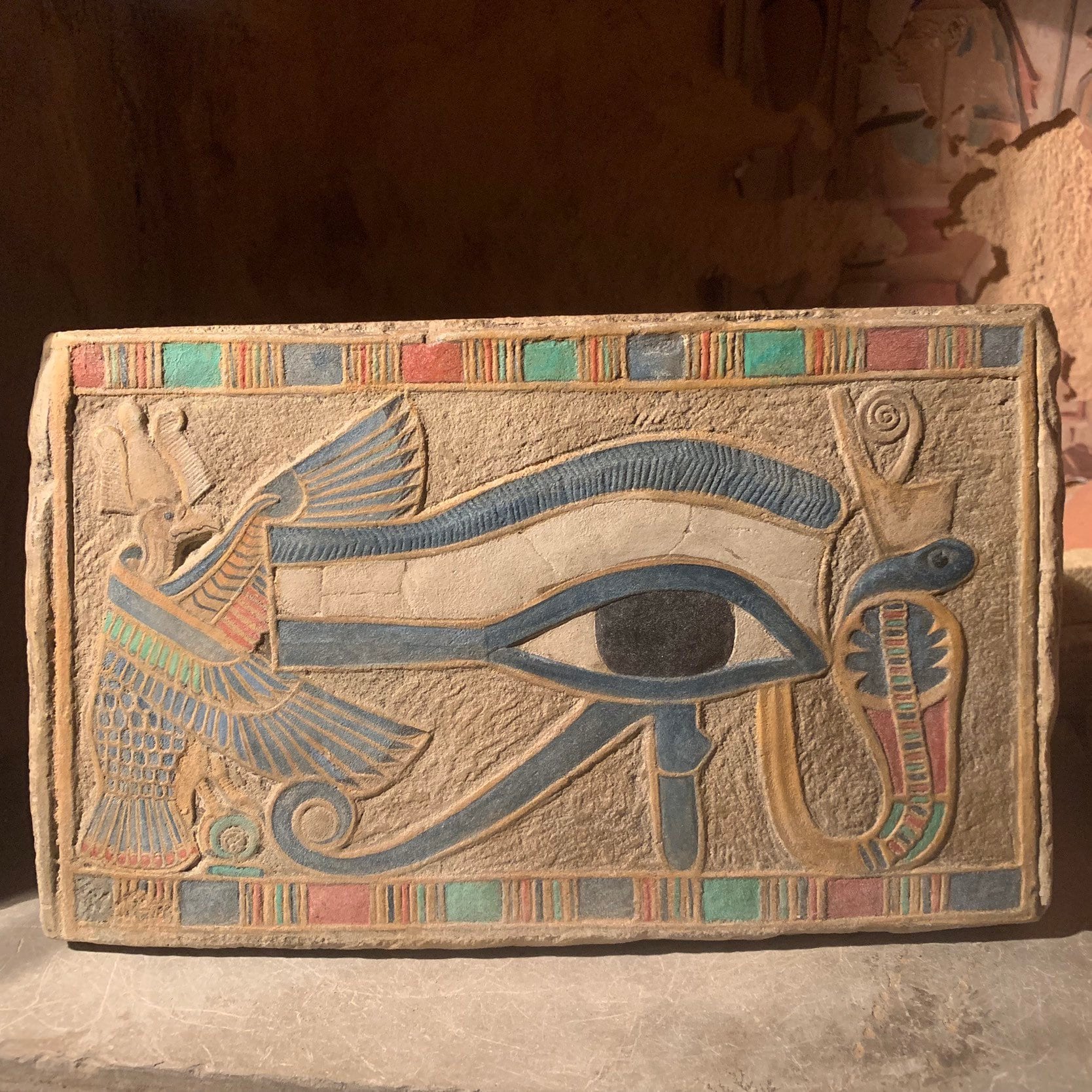 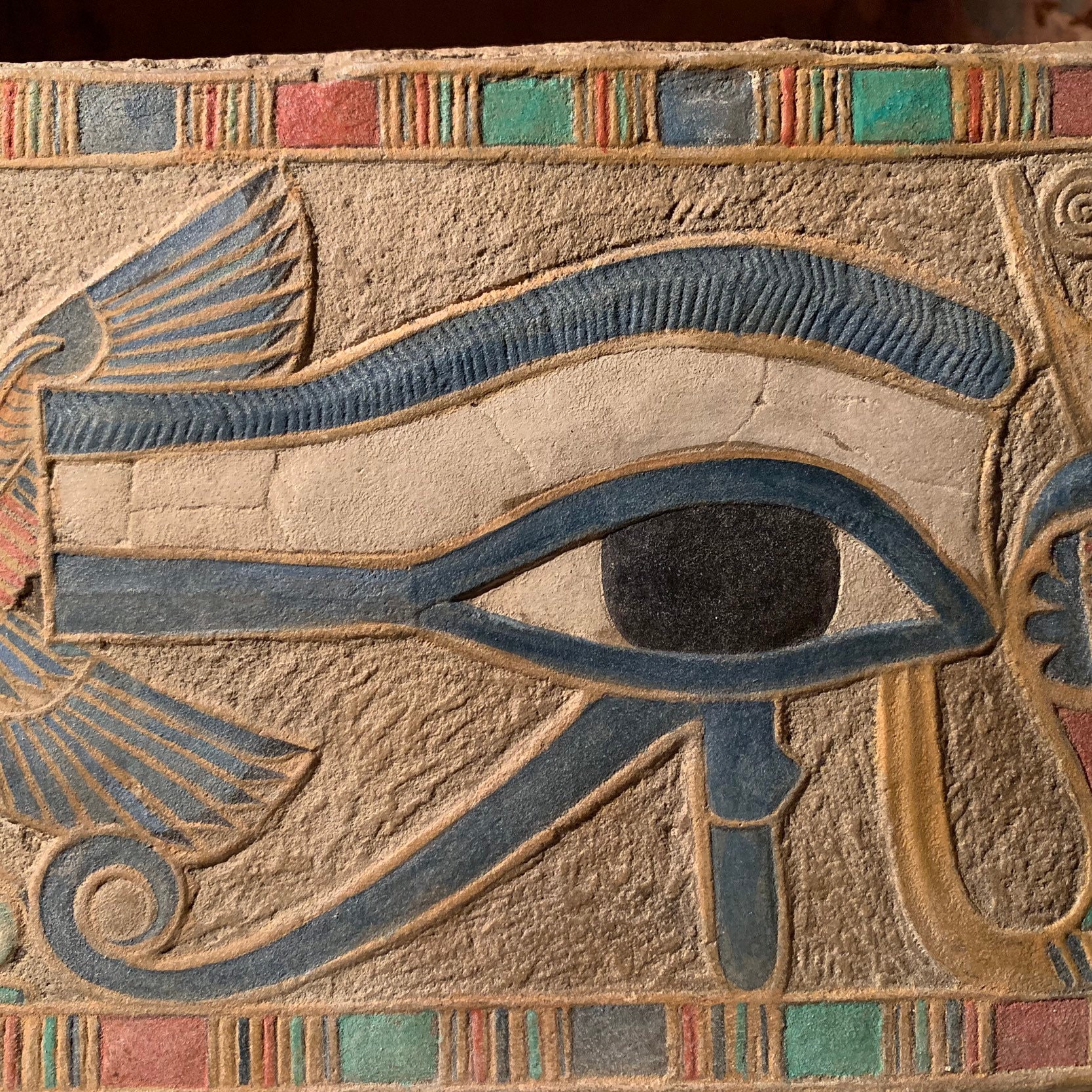 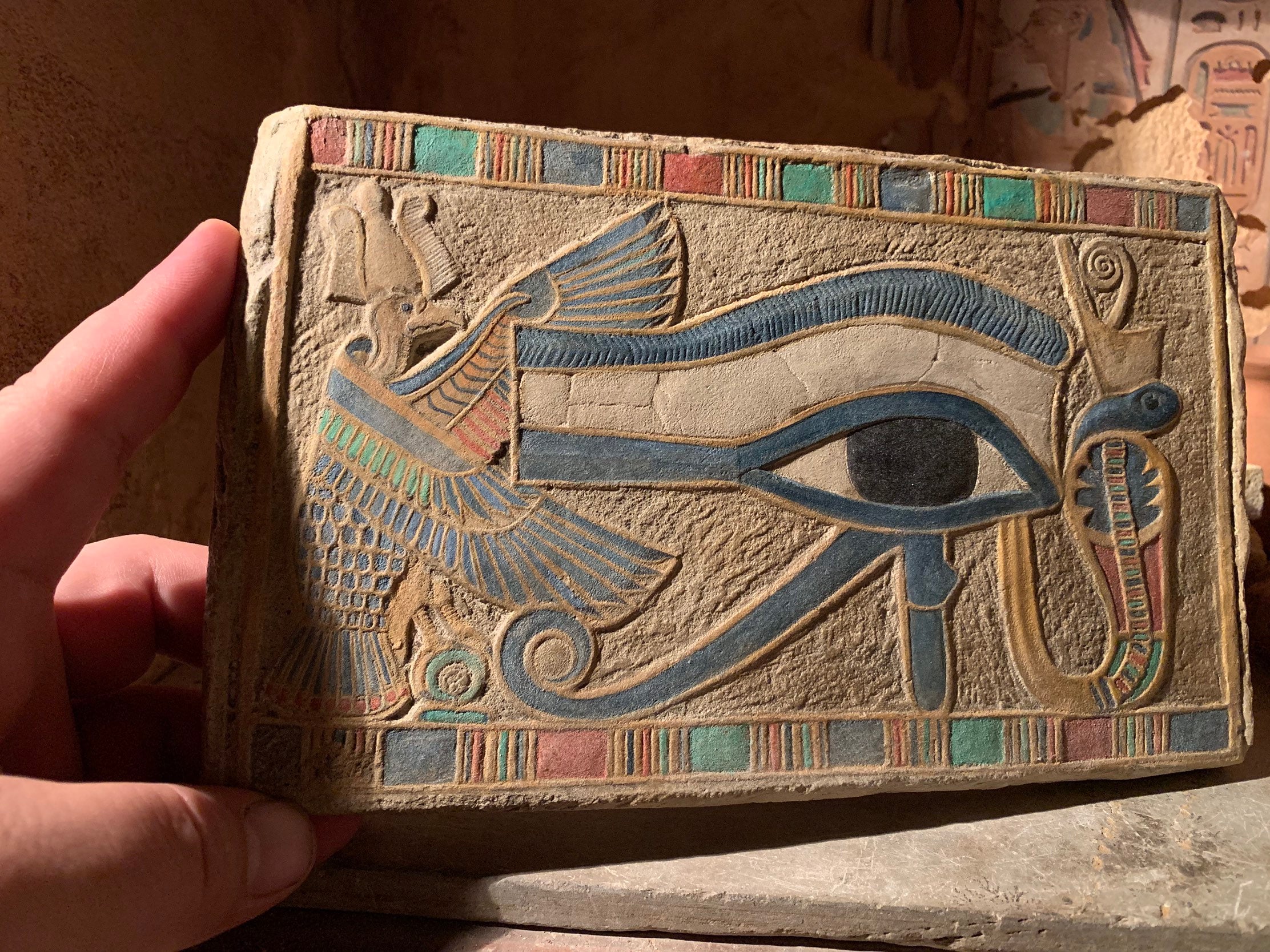 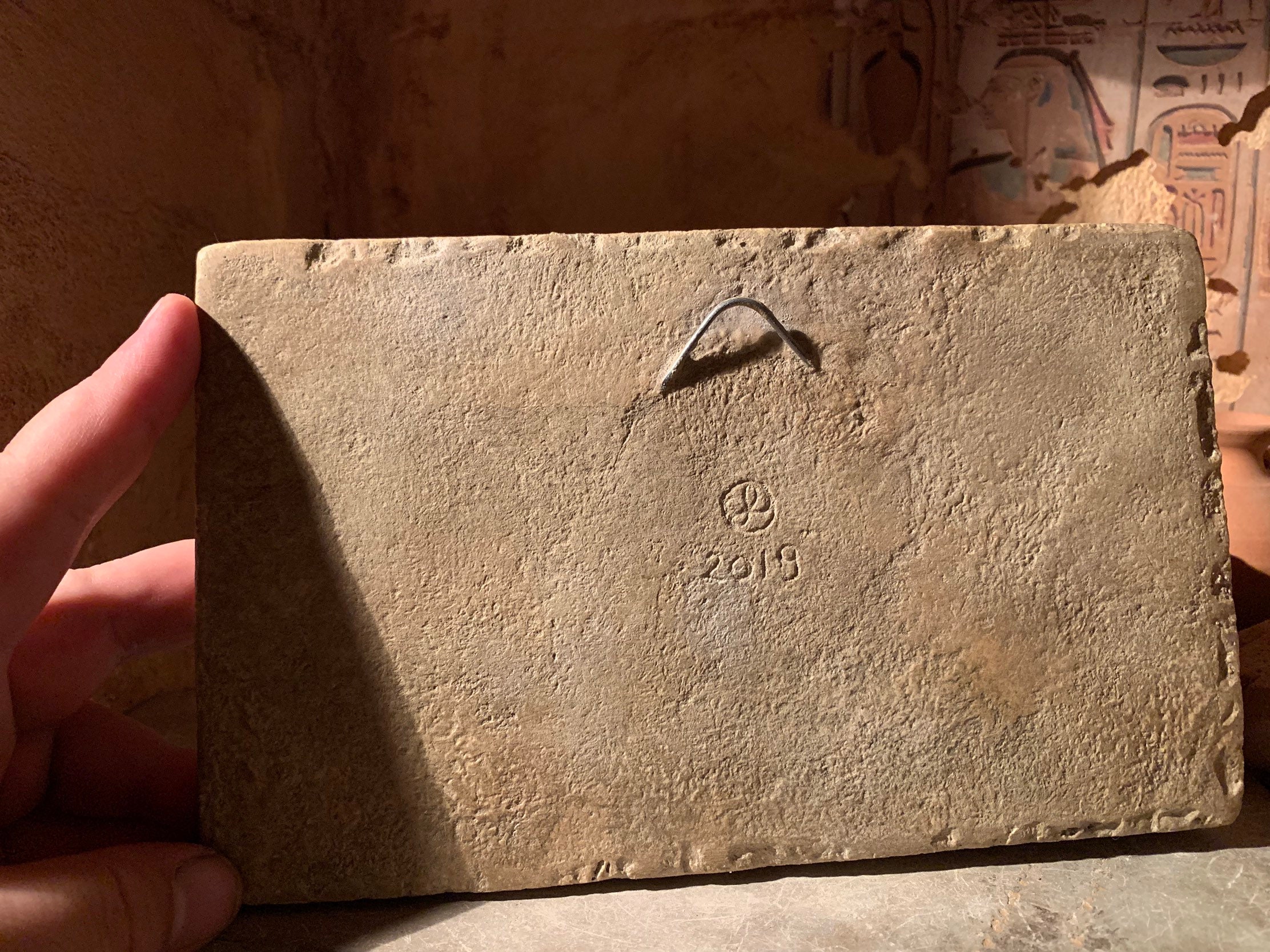 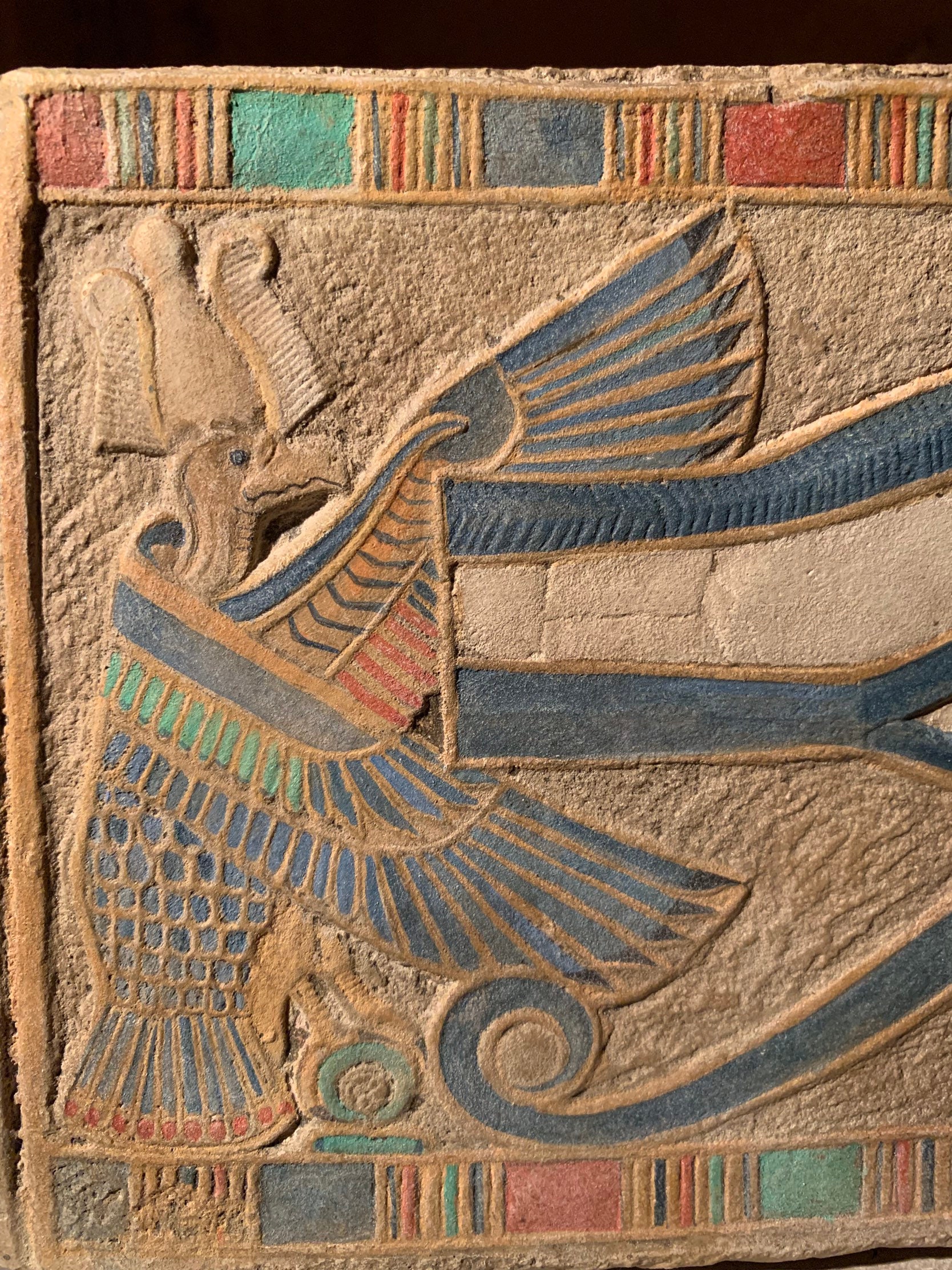 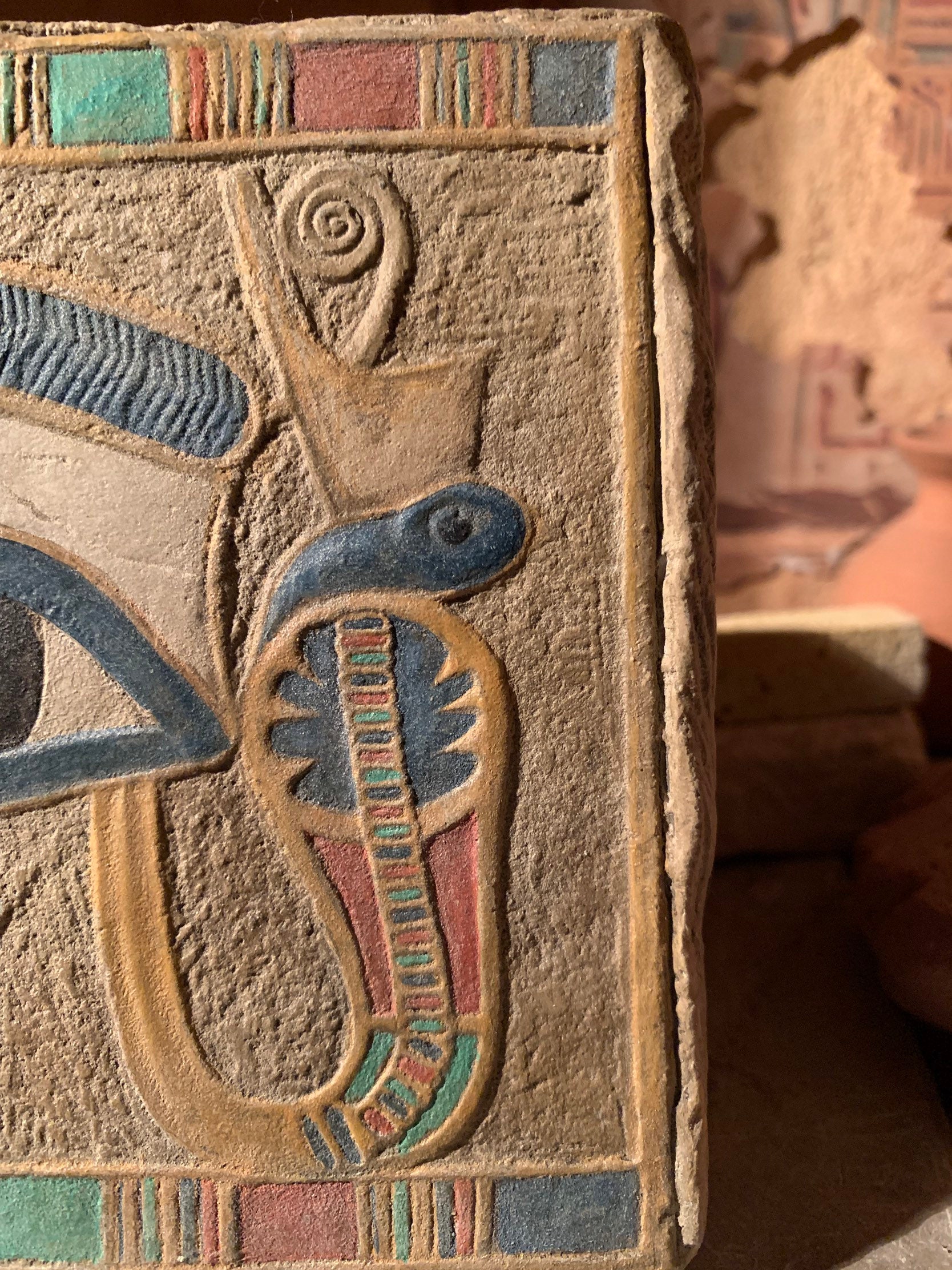 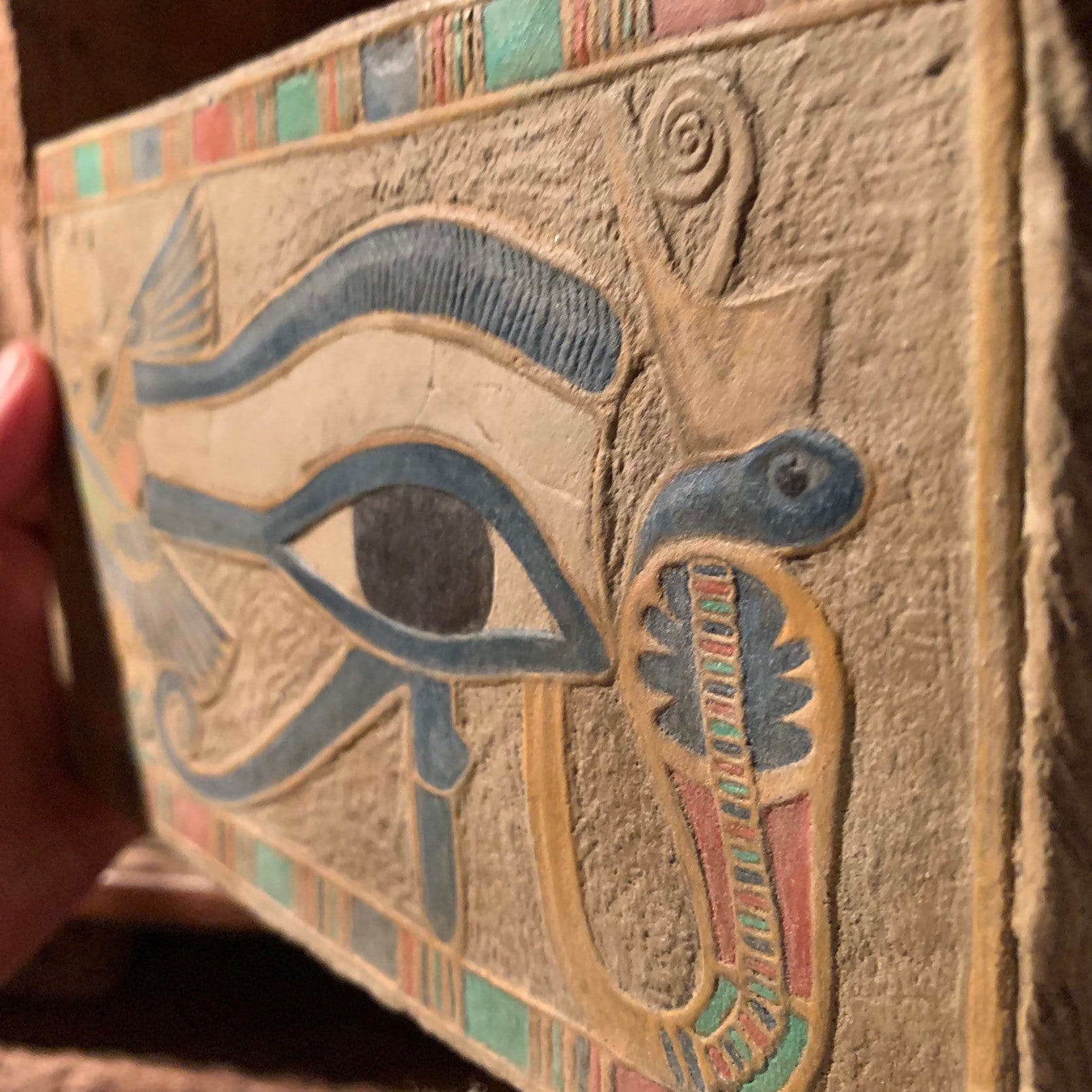 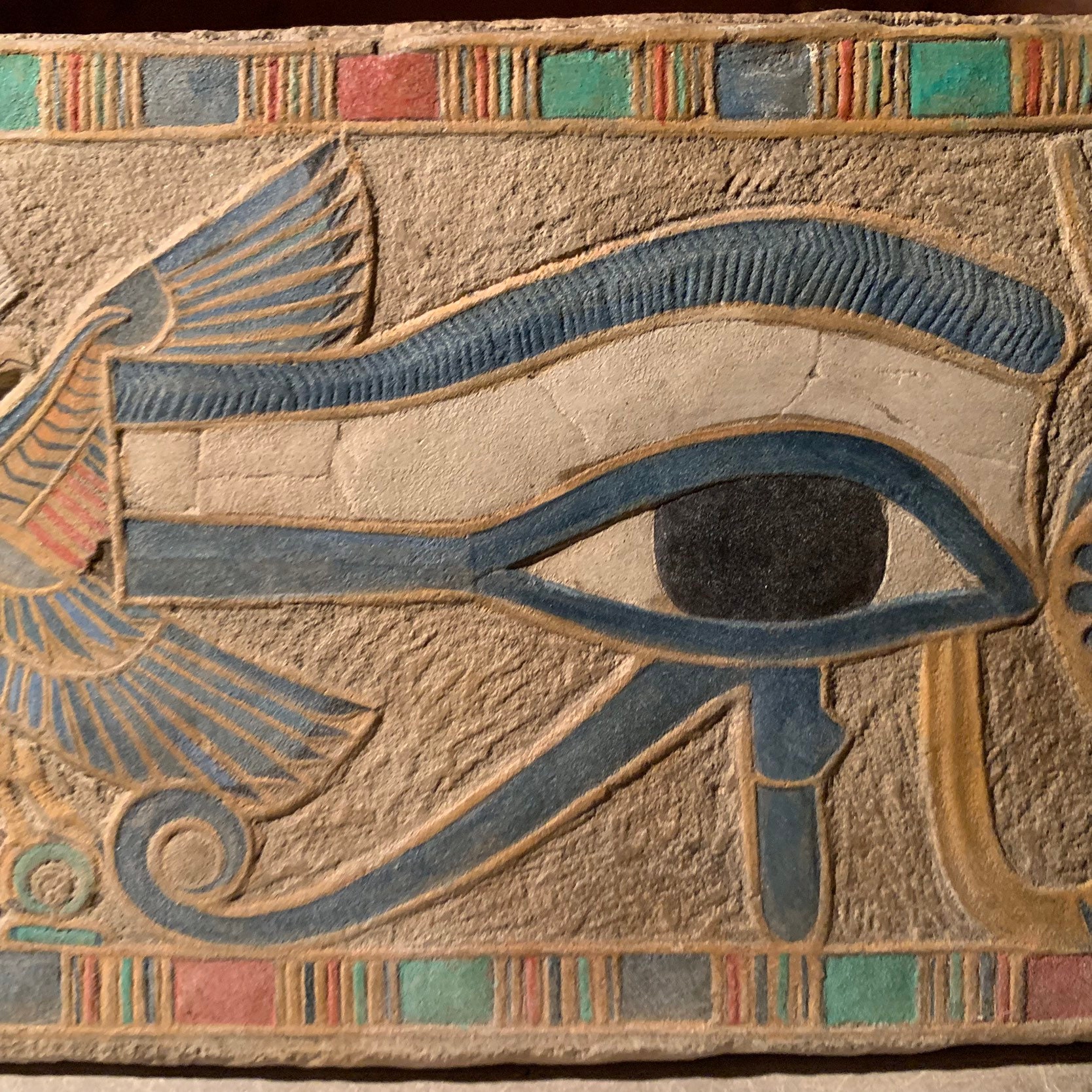 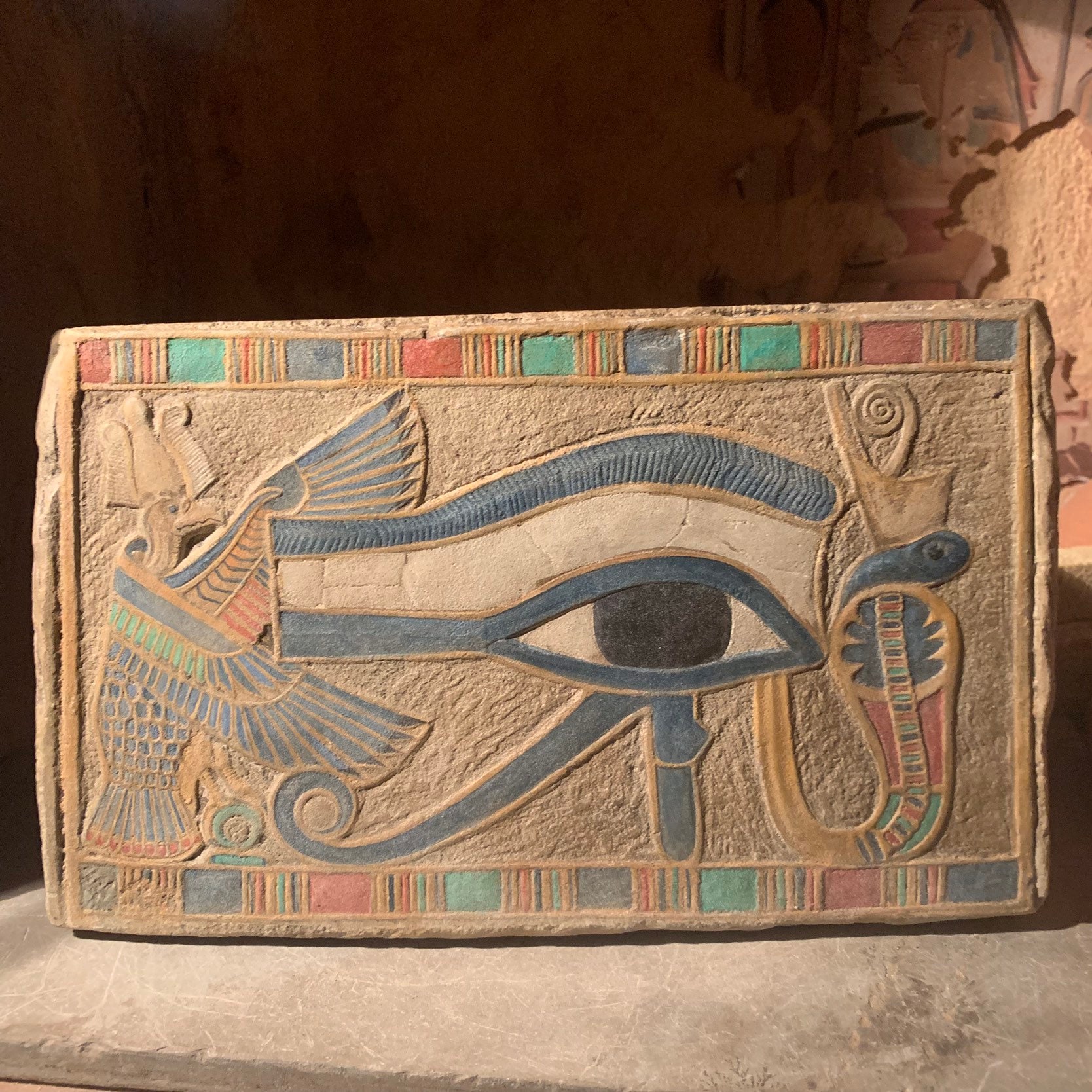 * Combined postage is on offer if you would like to add other items.

This most well known of Egyptian eye designs I have based on one of Tutankhamun's amulets found in his tomb. This is my finest eye carving and is a carefully painted version displaying the complexity of a subdued Egyptian colour palette. It also has an aged patina which gives an ancient look.

This piece is to be appreciated not only for it's extensive paintwork but for its sculptural qualities as well. With all of my pieces I recommend good direct lighting, preferably from above. This will activate the details and bring the piece to life. It is the nature of my work. Carved by light to be displayed in light. The lighting used in these photo's is from a simple desk lamp.

This example has a wire loop on the back that will allow for a wall hanging display option using a hook or angled nail.

This eye of Horus represents the right eye of the sun thus determined by the direction of the stylized scroll. When an eye features the scroll in the other direction it represents the moon. Flanking the eye are Nekhbet the vulture goddess of the south and Buto the serpent god of the north creating a potent image of visionary protection. The image of the eye can also be called the eye of Ra or even the eye of Atum, each with their own unique interpretations echoing the different perceptions of belief at different periods.

The god Horus is the son of Isis and Osiris and takes the form of a falcon or a man with a falcon's head. At the dawn of Egyptian civilisation he was a patron god of hunters eventually merging into the role of divine falcon of the sky. The evolution of his role in the Egyptian mind led Horus to be associated with music, art, humour and prophetic visions, rendering Horus one of the most enduring of all Egyptian gods. The kings of Egypt were known to be the manifestation of Horus often including royal titles such as "the living Horus".

The principal mythology surrounding Horus is based on a collection of similar story types that see Horus avenging his fathers death in an eternal struggle of good and evil. Osiris represented fertility, abundant gardens and crops - civilisation. His jealous brother Seth represented destructive elements thus linking him with storms and clouds and with animals such as crocodiles and hippopotamus. Seth murdered Osiris before Isis had conceived a child but her powerful magic restored Osiris back to life long enough for her to conceive. Horus came into being and took on Seth but neither could overpower the other. In my opinion, it is the Egyptian equivalent of the concept of yin and yang in Chinese philosophy. During one of the many challenges between the two gods, Seth damaged the eyes of Horus who wandered blindly through the desert until he was found by the goddess Hathor. Hathor was able to heal the eyes with gazelles milk thus restoring order. The eye became a powerful symbol of protection, purification and strength and came to be known as a wadjet or udjat eye.

The Egyptians use of the eye found it being worn on necklaces, finger rings, bracelets and incorporated into wall reliefs and mummy wrappings. During the middle kingdom it was common for both eyes to be painted or carved on the sides of rectangular coffins so that the mummy also placed on its side could 'see out'.


Kameron's works are mostly sculptures both in the round or relief carving. His specializes in the reproduction of ancient Egyptian sculpture. His work was exhibited extensively in Brisbane with displays in the state museum, and in conjunction with a spectacular production of the opera Aida. His story and his work was shown on Australian television, and his hand made sculptures sold across Australia, and to overseas destinations such as New York, London, Iceland, India and Switzerland. Many of them are used as decorator items for interior design (Objects D'art) or as whole feature walls. The strength of his commercial work stems from the ancient realism that he gives his pieces.

Kameron grew up on a farm an hour and a half south of Brisbane, Australia. The mountains of the Great Dividing Range were always in view and particularly close was a mountain known as the sleeping Assyrian. This mountain had human features in profile. A colossal figure of a man gazing skyward as he lay on his back could be seen if one used imagination and the lighting was right.
He developed a very close affinity with the land studying the many rocks and fossils that he discovered on his expeditions and came to know how to work different materials that could be found on the property. His very first stone sculpture was a life size Galapagos island tortoise that would disappear under the waters of a flood prone creek whose banks it was made upon.


During the 1970's was a time when ancient Egypt was once again casting a spell on much of the world's population. The Tutankhamun exhibition that never toured Australia still ignited a fire of appreciation that saw Egyptian culture infused in Television shows and literature directed at the children of the day. Oh mighty Isis was one such show that Kameron points to as a significant early influence.

Most importantly it was when Kameron's father brought home a large book that was filled with many different ancient cultures that he fell in love with Egypt and the rest of the ancient world.

As a child, Kameron tried to emulate the past by carving images into the stones and forming clay figurines. As a teenager he was Pharaoh, high priest and artisan whenever he visited his grandparents remote property. This was his imaginary empire and at this most special and sacred place he really learnt to carve. Small sandstone cliffs were transformed to become the home of larger than life sized Pharaonic heads, small pyramids were constructed for his royal pets while non royal pets were merely given a small sealed underground chamber. Artworks were created exclusively for burial and accompanied the many mummified fish and birds as well as un-mummified cats and dogs. It was an unconventional subconscious learning experience. He never thought he would take it further than the fields, but now it is a full time occupation which sees his work going all over the world, even making pieces of authentic museum quality reproductions for Warner Brothers and 20th century fox film sets.
Night at the museum III and God's of Egypt, are the most recent films to feature his work.

In the art of sculpture Kameron is self-taught. Over the years, he has created a range of realistic ancient sculptures with an attention to detail that makes the work look as though you have just unearthed it from an archaeological site … and that is the difference. Some of the world's leading archaeologists have viewed Kameron's work with interest comparing it favourably with the artists that lived in Egypt's ancient capital of Thebes. He has also had the privilege to restore some antiquities matching form and colours exactly to suit.

We hope you enjoy the work and thank you for your interest.