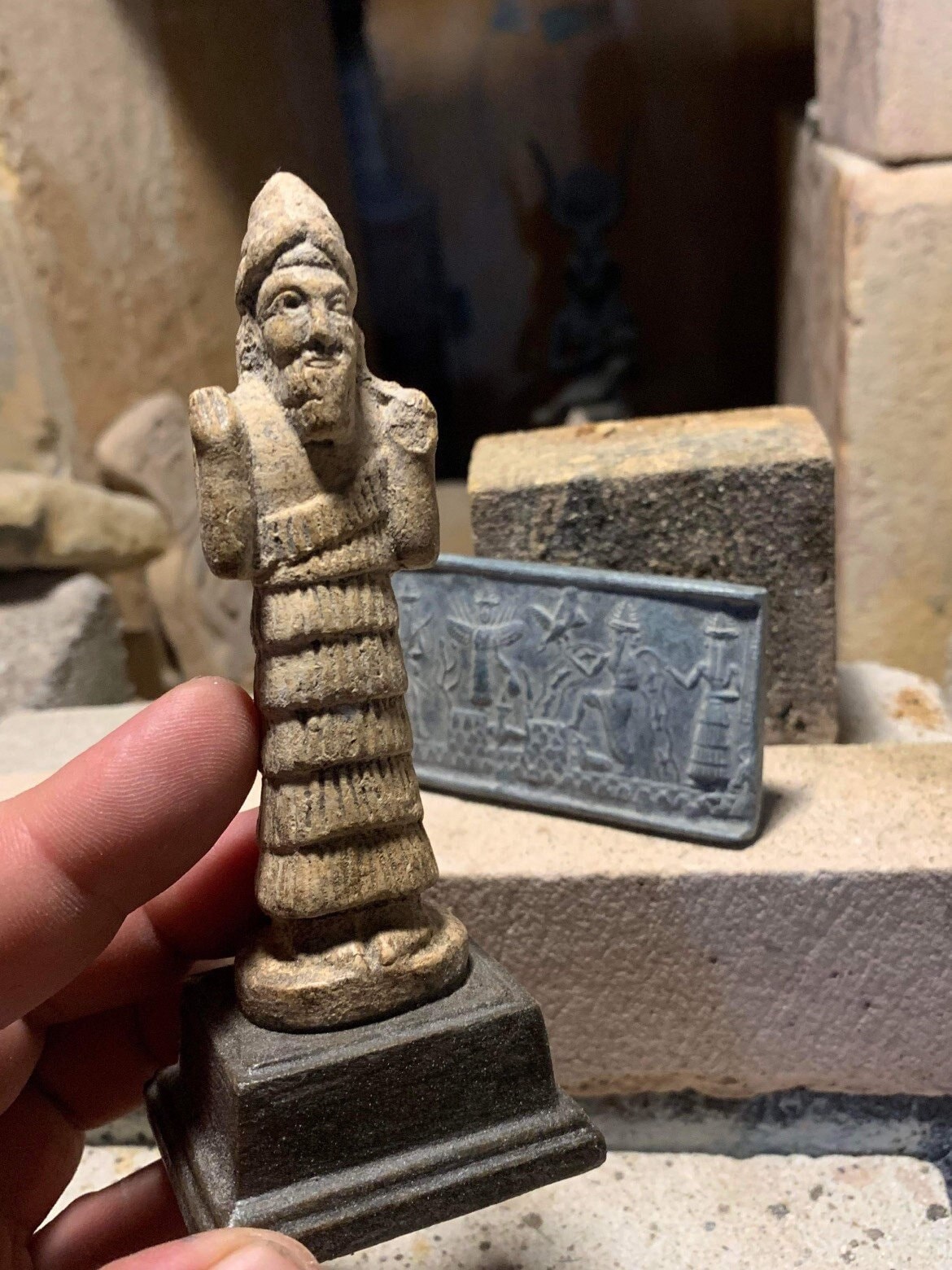 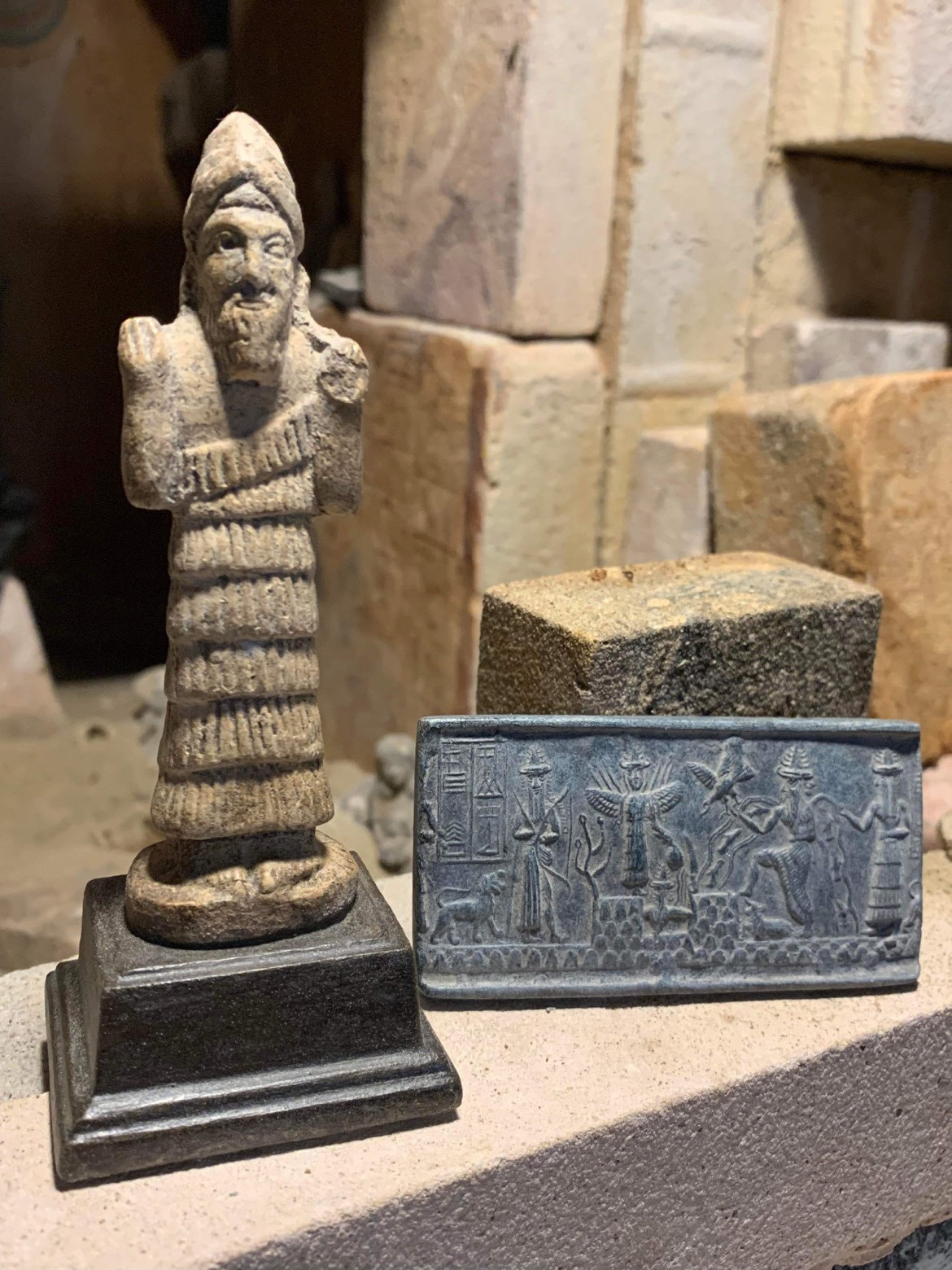 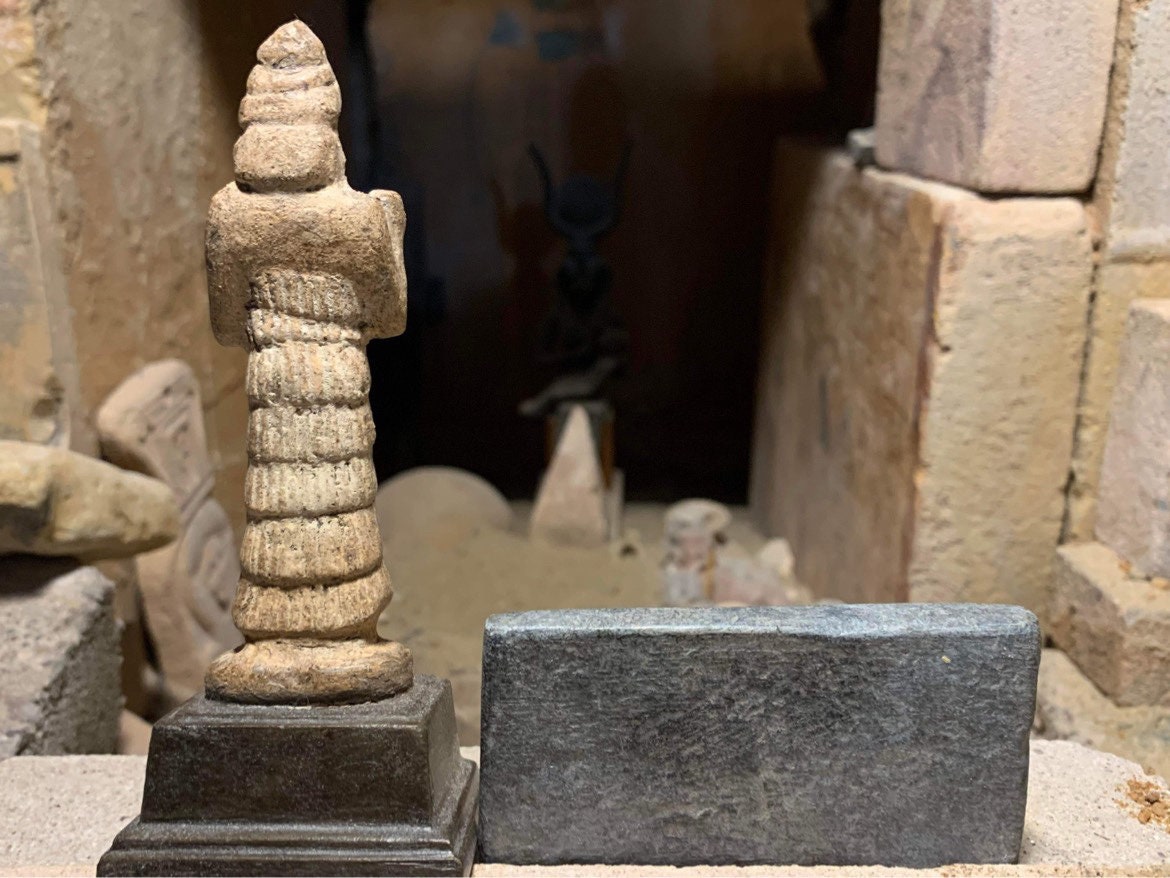 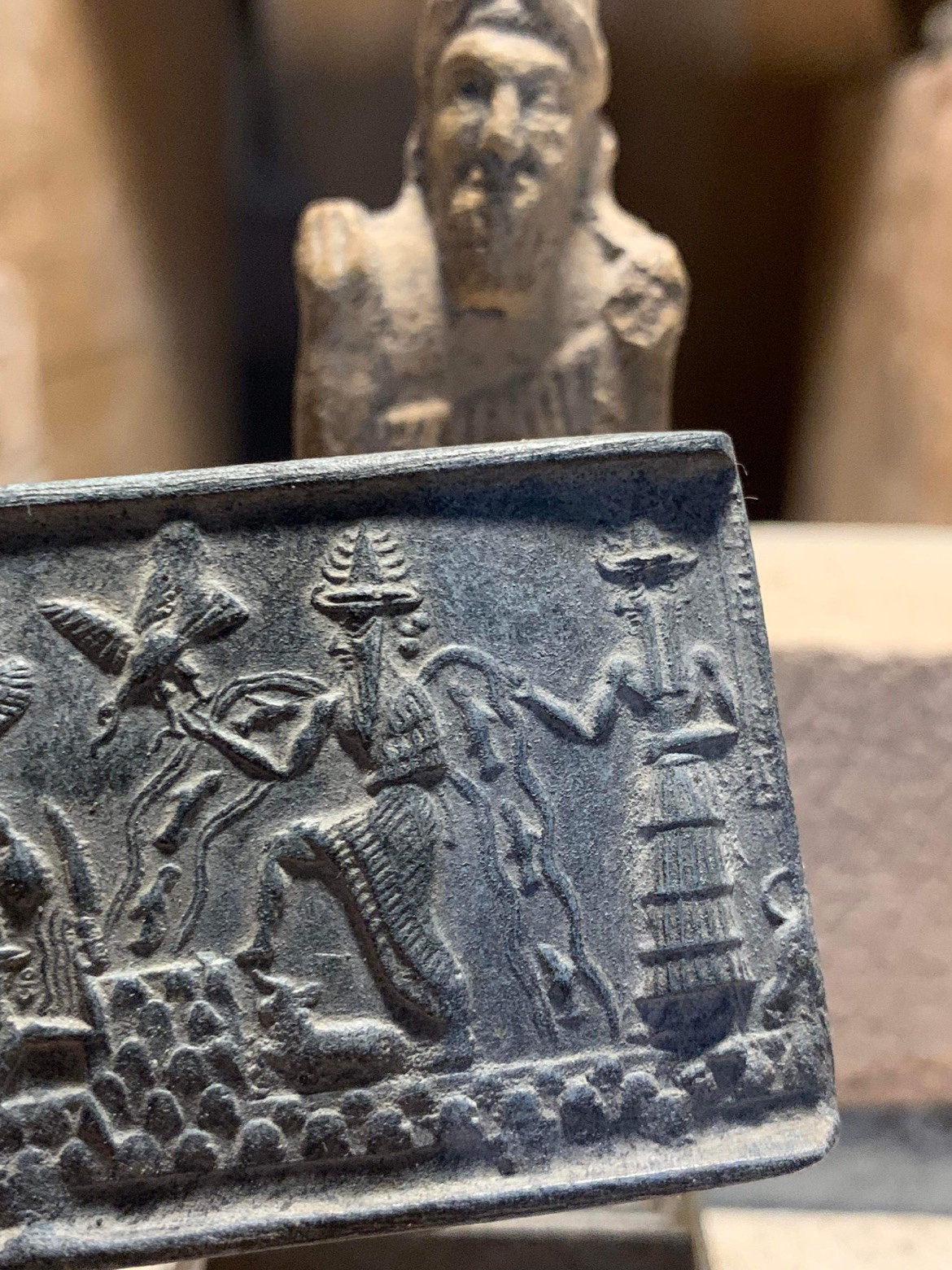 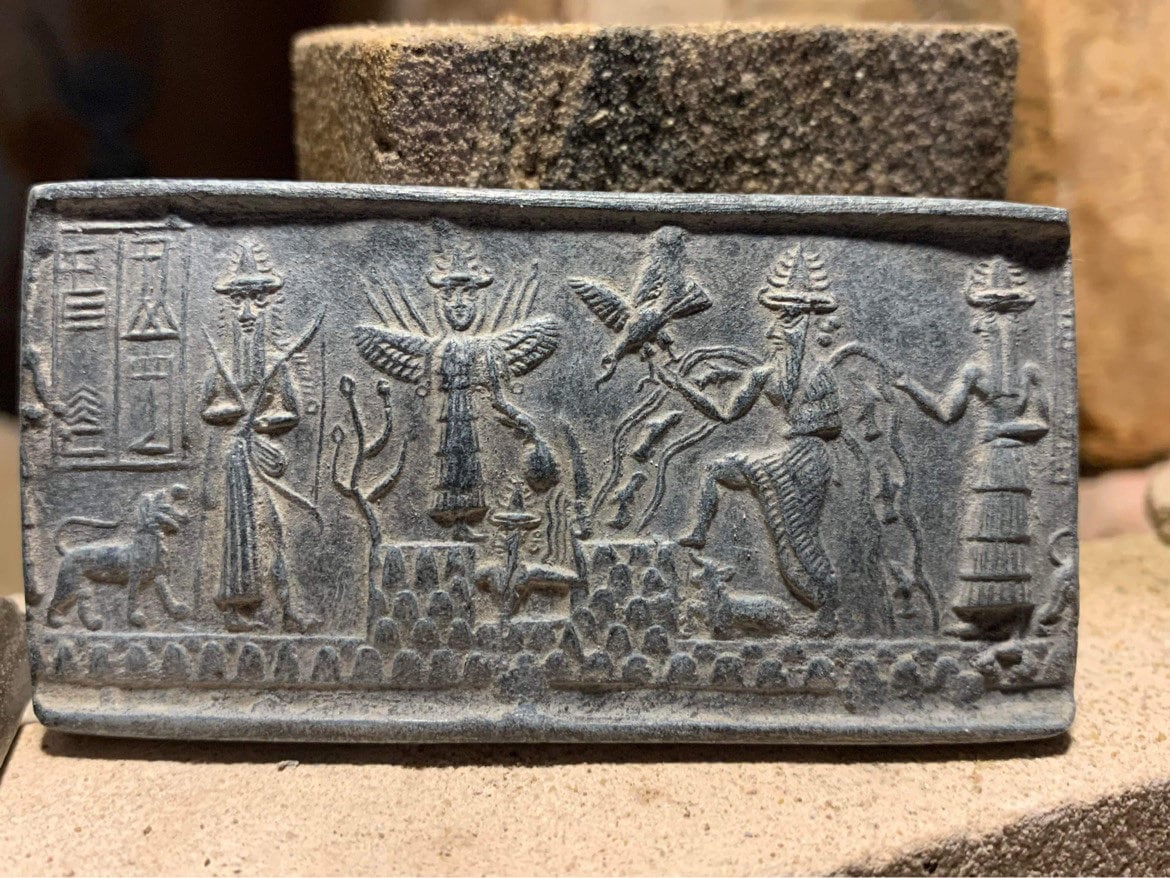 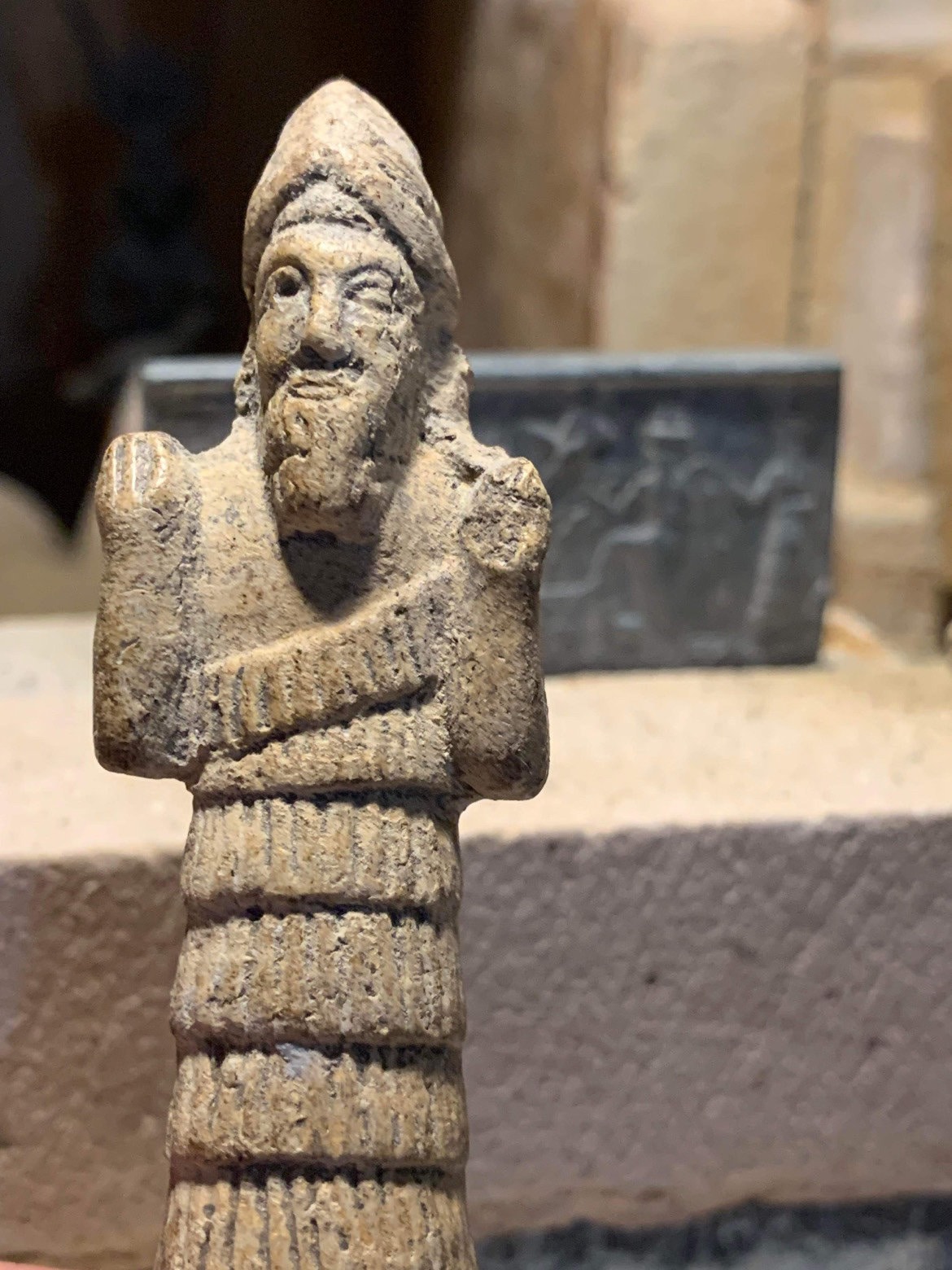 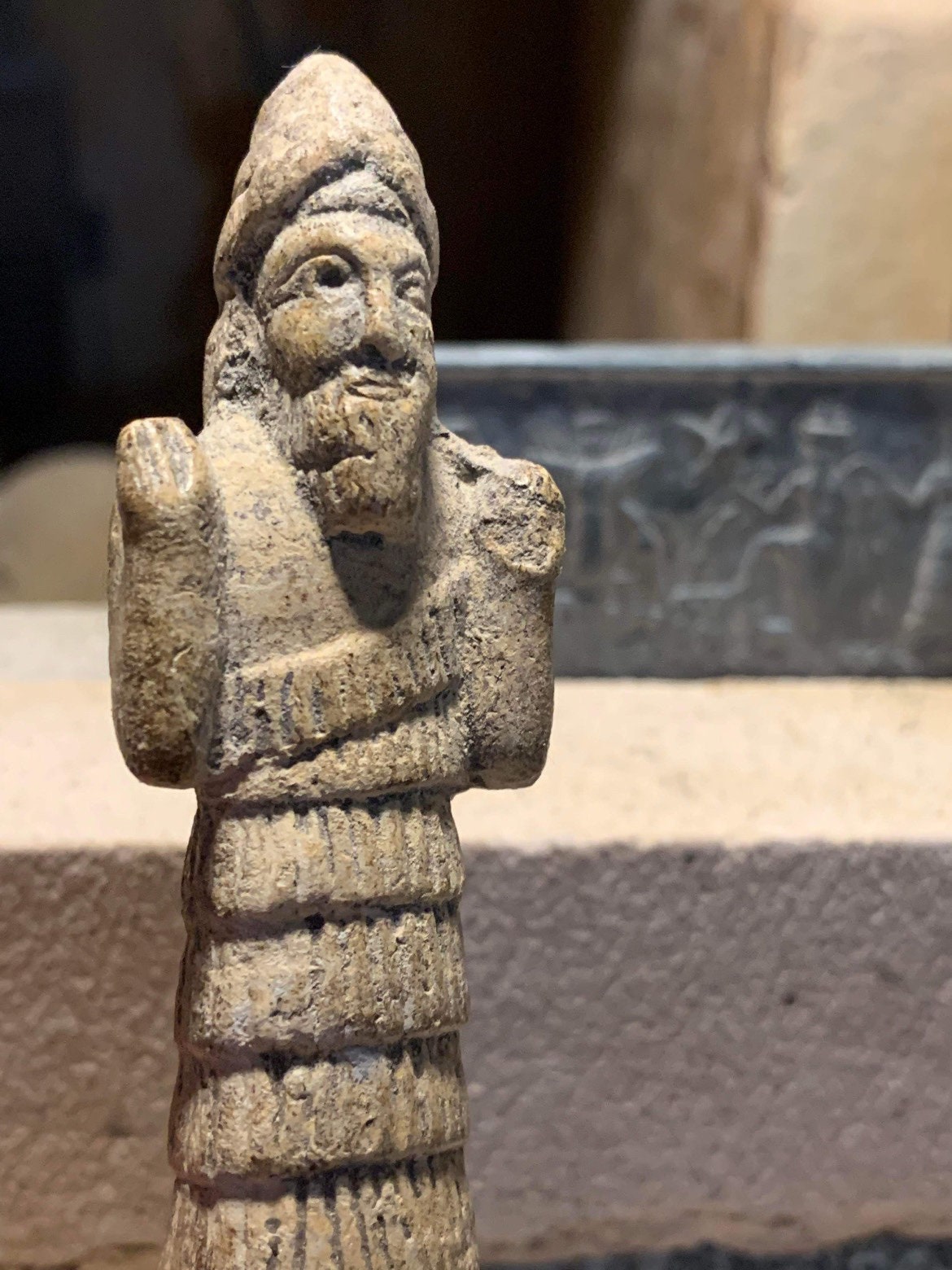 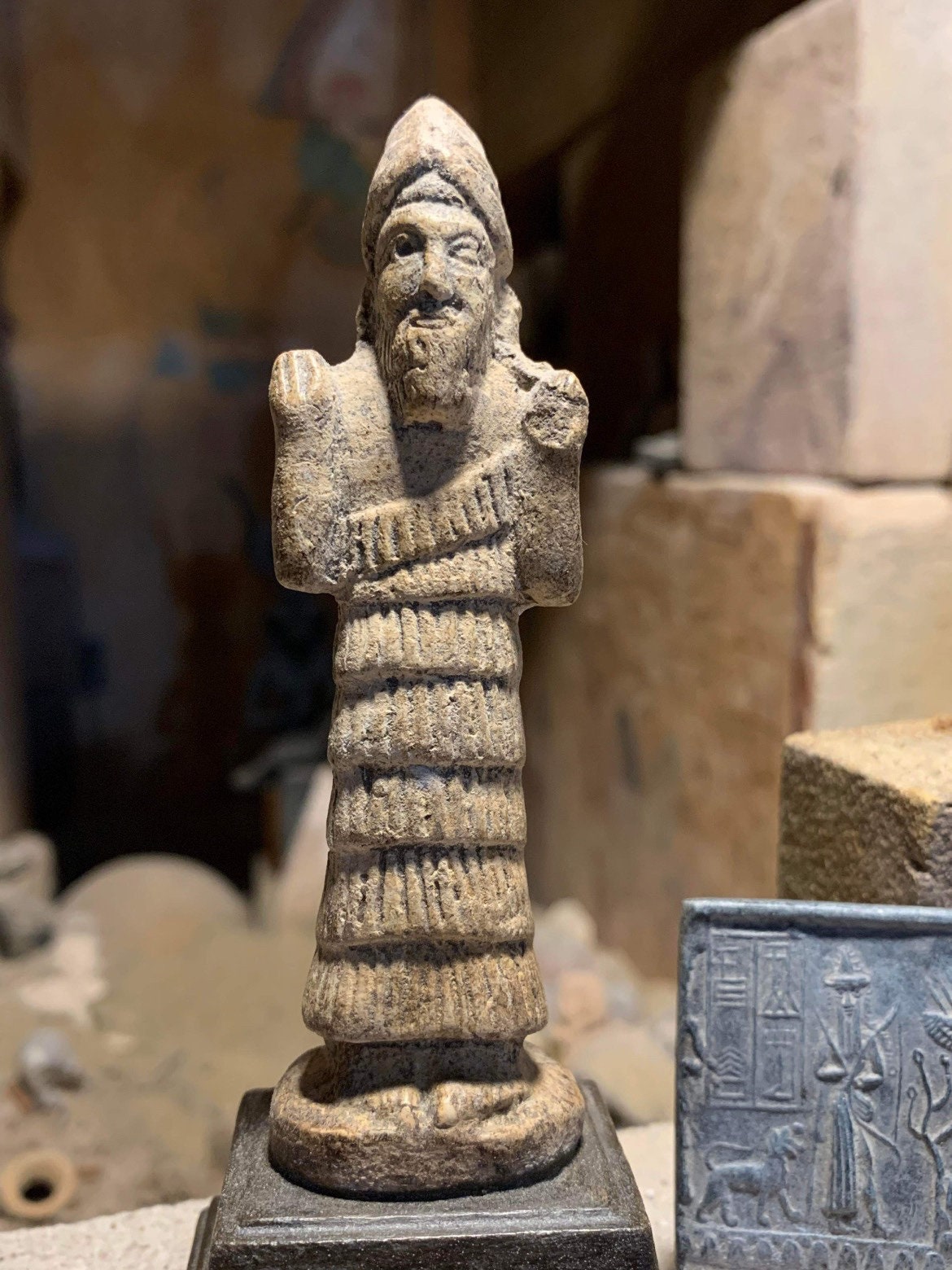 On offer here is a fine, and highly detailed replica of an Akkadian seal impression featuring four of the principal Gods of the Mesopotamian world and an attendant messenger. In addition a small statuette of Enki makes for a great combination display option.
Made of a limestone and quartzite composition stone, the statue and impression have aged patinas.

*Combined postage offered if you would like to add other items for an economical shipping option.


The seal impression - from left to right - entering the scene with a roaring lion and holding a bow and arrow, this figure has been variously identified as Ninurta or even Nusku.

Standing atop a mountain is the winged Goddess Ishtar / Sumerian Innana. She clutches a bunch of dates as a symbol of abundance and fertility and to show her war like nature, weapons protrude from her shoulder.

In the very centre, the sun God Shamash / Sumerian Utu, splits the mountain so he can rise from the horizon. A few wavy lines radiate from his shoulder that signify the sun's rays.
To the right of the sun god is Ea / Sumerian Enki. God of wisdom and pure underground water. A combination of fish and water flow from his shoulders to quench the land.
To his right can be seen Usmu or Usimu who was Enki's vizier or messenger. He is sometimes shown to bring a bird-man before Enki and here a winged bird can be seen directly in front of Enki.
The Akkadian empire unified the Sumerian and Semite cultures and most gods remained in essence and iconography even if the names were changed.

The statuette of the Sumerian god Enki is a good example of the type of votive sculpture used by the noble populace who lived in cities such as Ur, Eridu, Tello, Nippur and Susa. Enki emerged as a deity with great influence over the fertile crescent of the Mesopotamian lands. Enki is a god with many attributes and points of interest. Some are listed below :-

* Simply revered as 'Lord of the earth and water'

* Water in particular is a major point of his iconography. Water of rivers, lakes and the oceans. The distribution of it, the use of it for crops, harvesting from it in the form of fish and other food items. It's cleansing properties.

* He was a god of crafts and intelligence and was a keeper of decrees known as 'ME's'. These were gifts to define the form and function of civilisation.

* The planet Mercury was associated with his heavenly manifestation in Sumerian cosmology.

* His symbols were the goat and the fish, another way of displaying the dual nature of his earth and water attributes. In later times the two were joined to create the symbol of Capricorn.