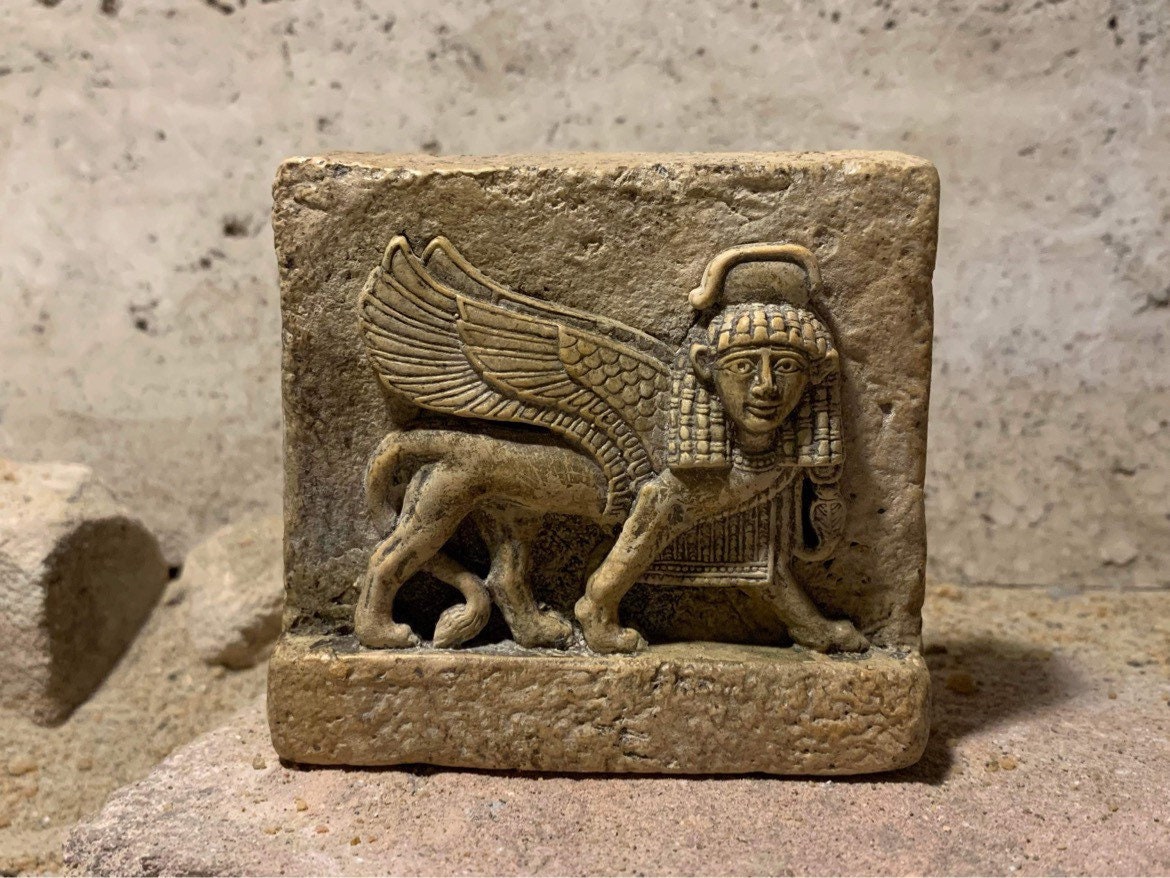 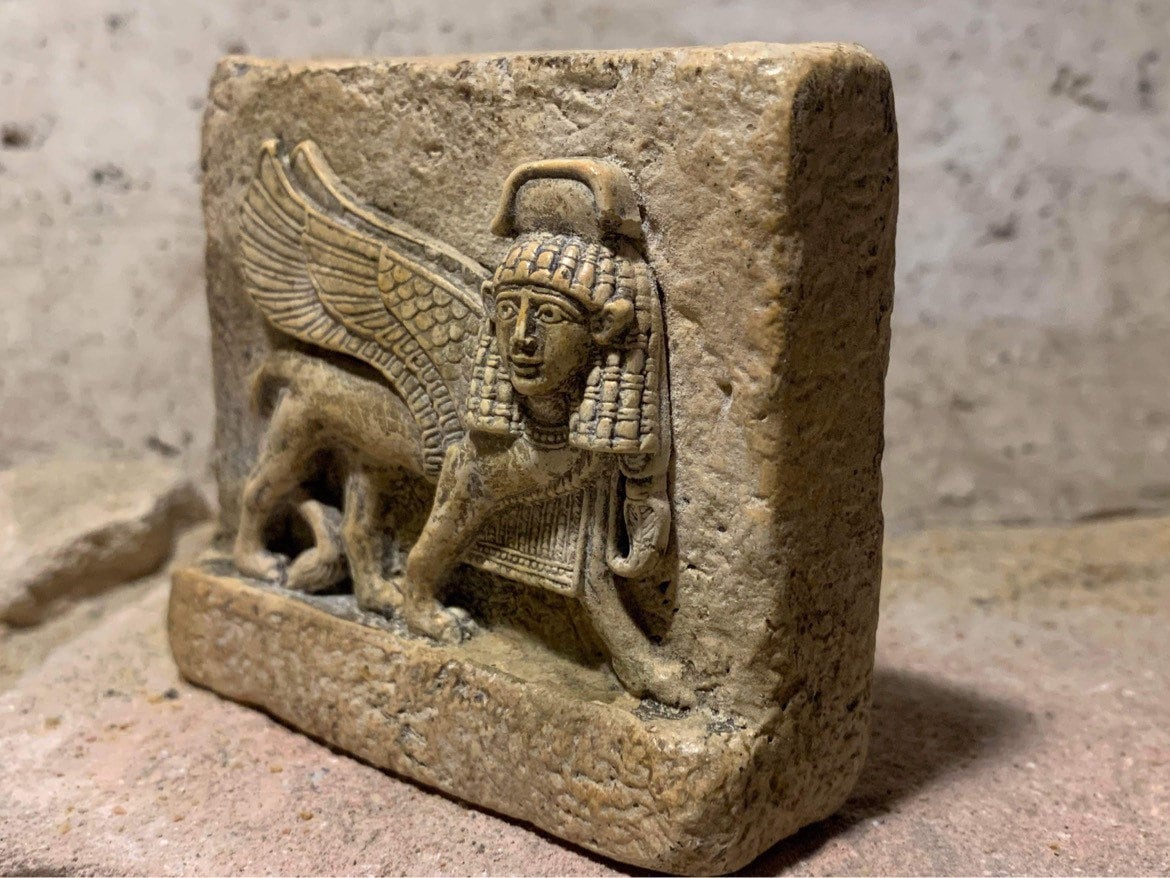 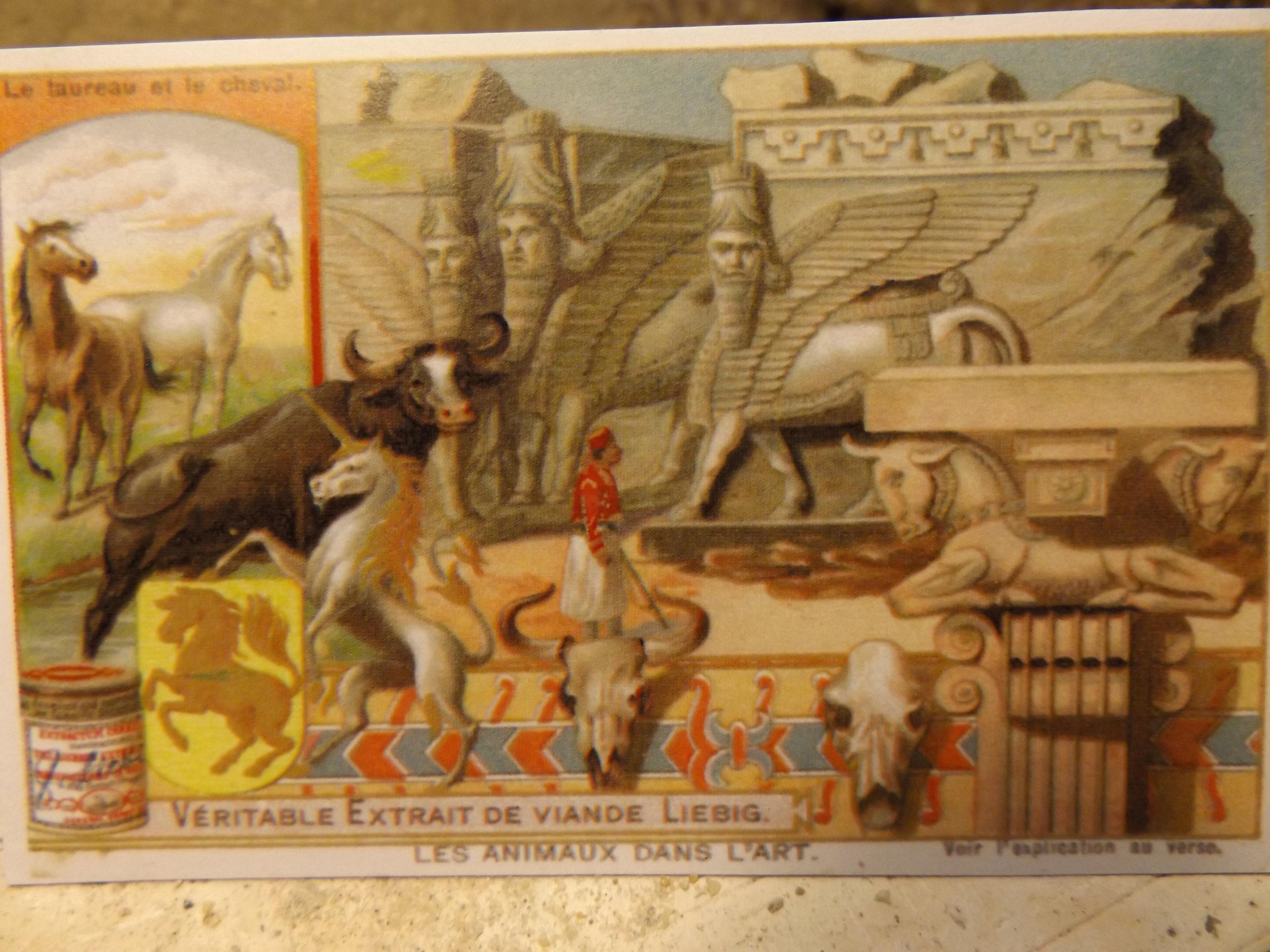 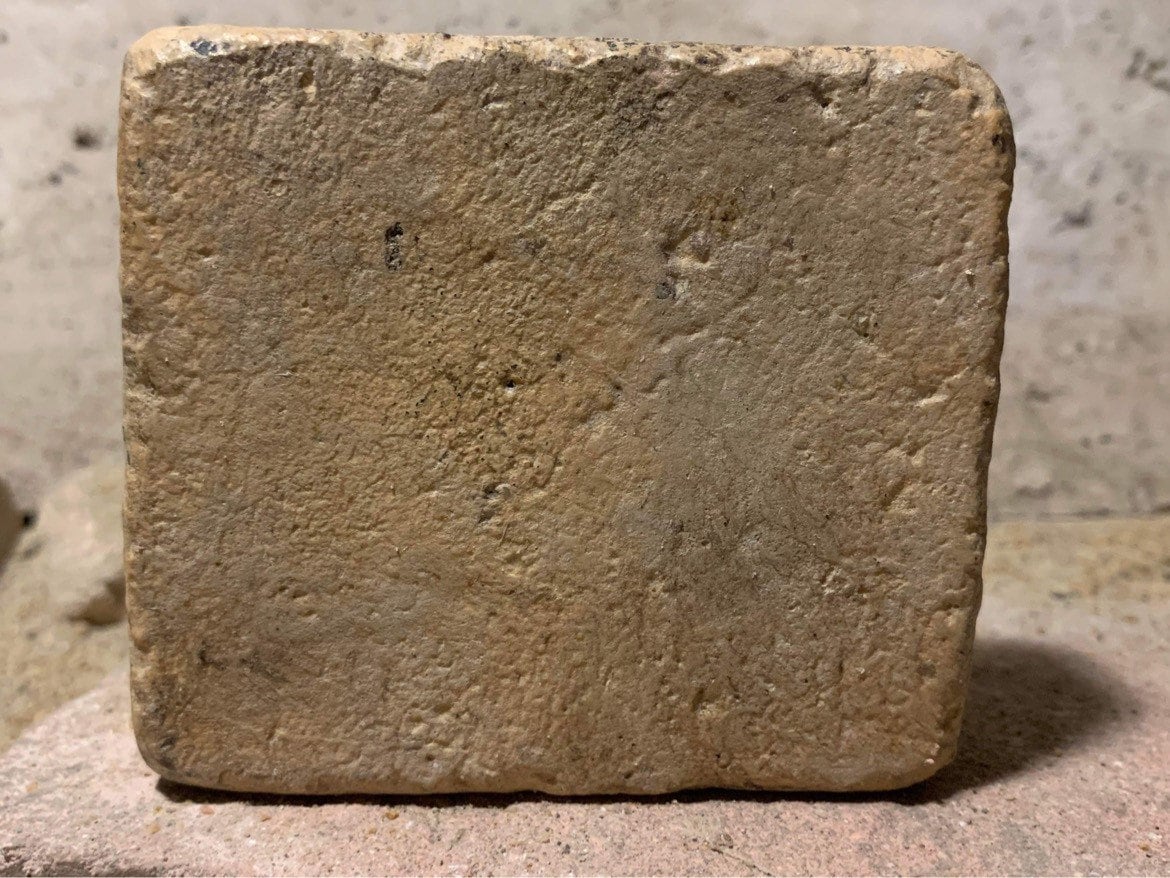 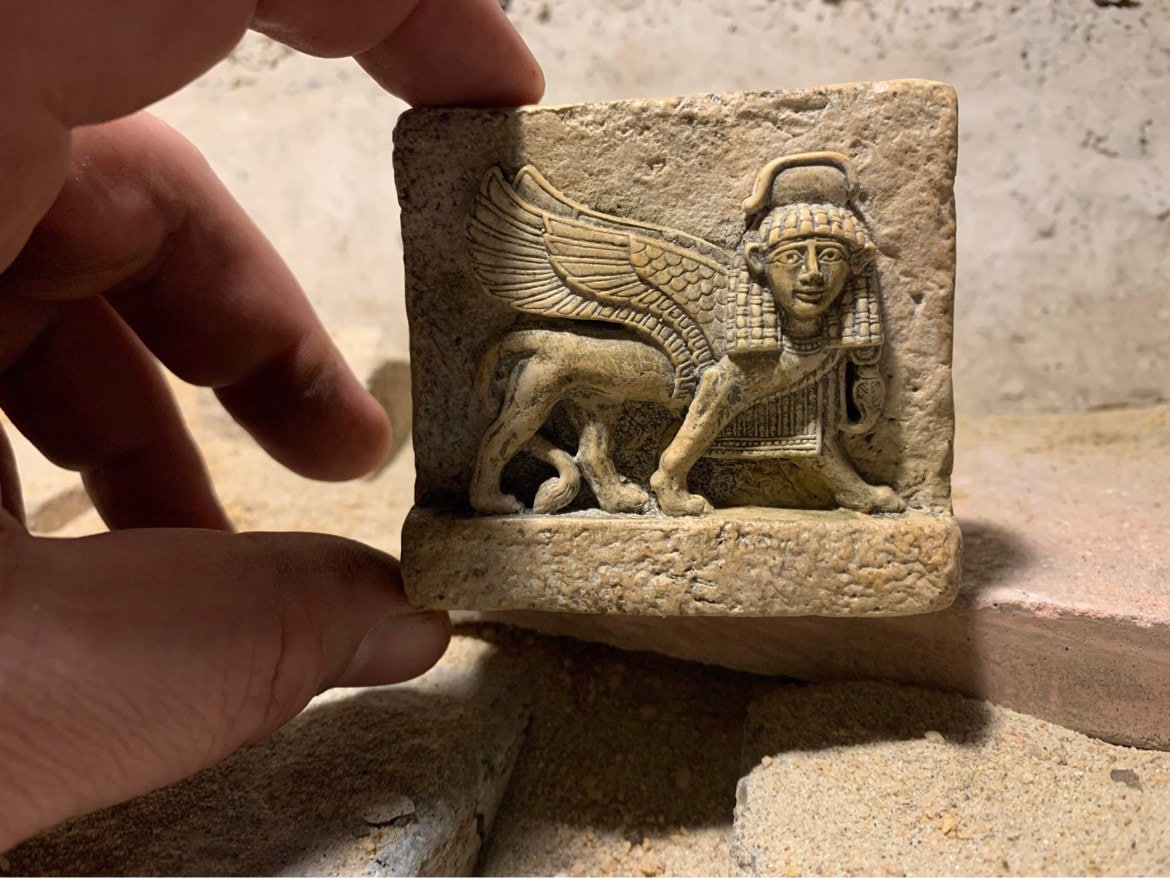 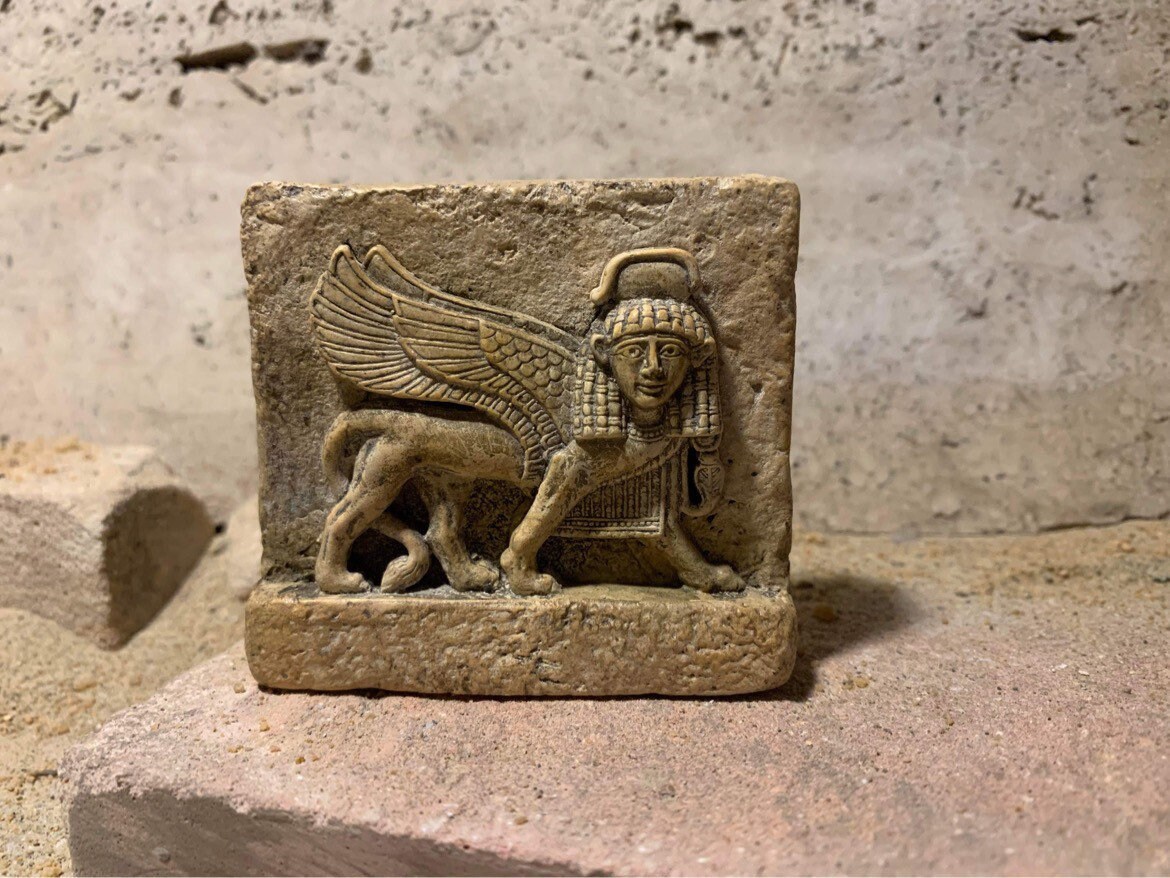 On offer here is another exclusive format design of one of the striding sphinxes of Nimrud - the once great city of the Assyrian empire.
Made of a limestone and quartzite composition stone it has an aged patina and texture.

* Included is a replica collector card from the early 20th century that features the famed winged bulls of Mesopotamia.

The city of Nimrud attracted much tribute from the power players of the known ancient world. This tribute came in the form of exotic spices, fabrics, and precious objects manufactured by the best artists in the lands.
The Egyptians and Phoenicians in particular bestowed upon the Assyrian kingdom beautiful furniture that was extensively inlaid with carved ivory and precious stones.
Most of these were destroyed later in history but hoards of remnants were found buried in secret caches or found at the bottom of wells within the city.

The piece on offer is based on one of these finds and has an obvious Egyptian influence. Egypt was the original home of the sphinx and to be seen in this unusual striding variant, a pseudo Egyptian face of great beauty looks towards the viewer while the body remains in profile. The Egyptian royal and divine protective cobra is present in the composition and can be seen emerging from it's chest.
However it is not pure Egyptian art as it has been modified to suit Assyrian tastes. The treatment of the eyes and It's echeloned hair curls are far more pronounced than standard depictions of Egyptian hair during the 9th to 7th centuries B.C.E. when the tributes came into the Assyrian coffers.

It shares a connection to the svelte form of the Egyptian god Tutu but the wings it possesses are more associated with the iconic winged bulls and lions native to Mesopotamian art.