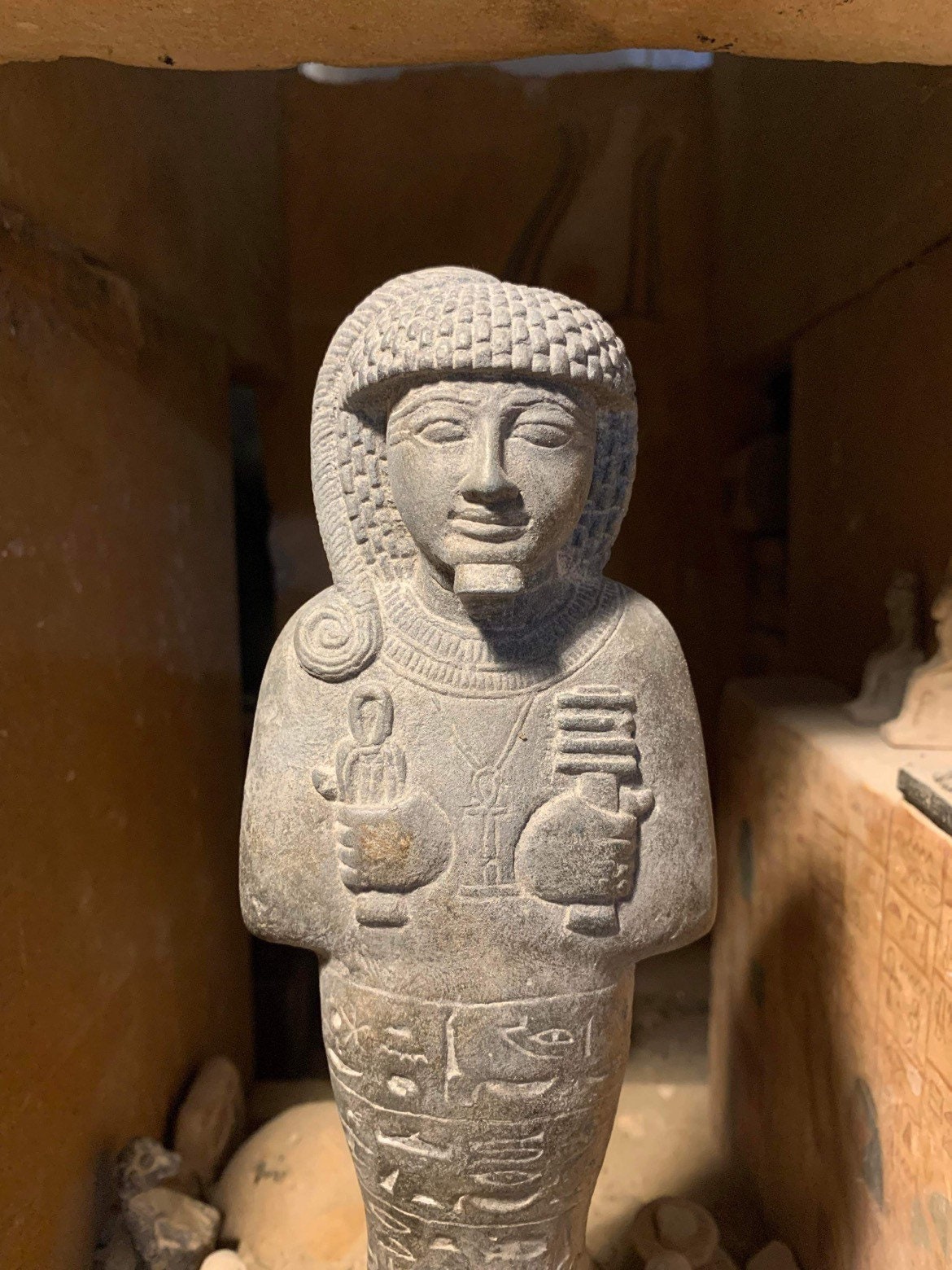 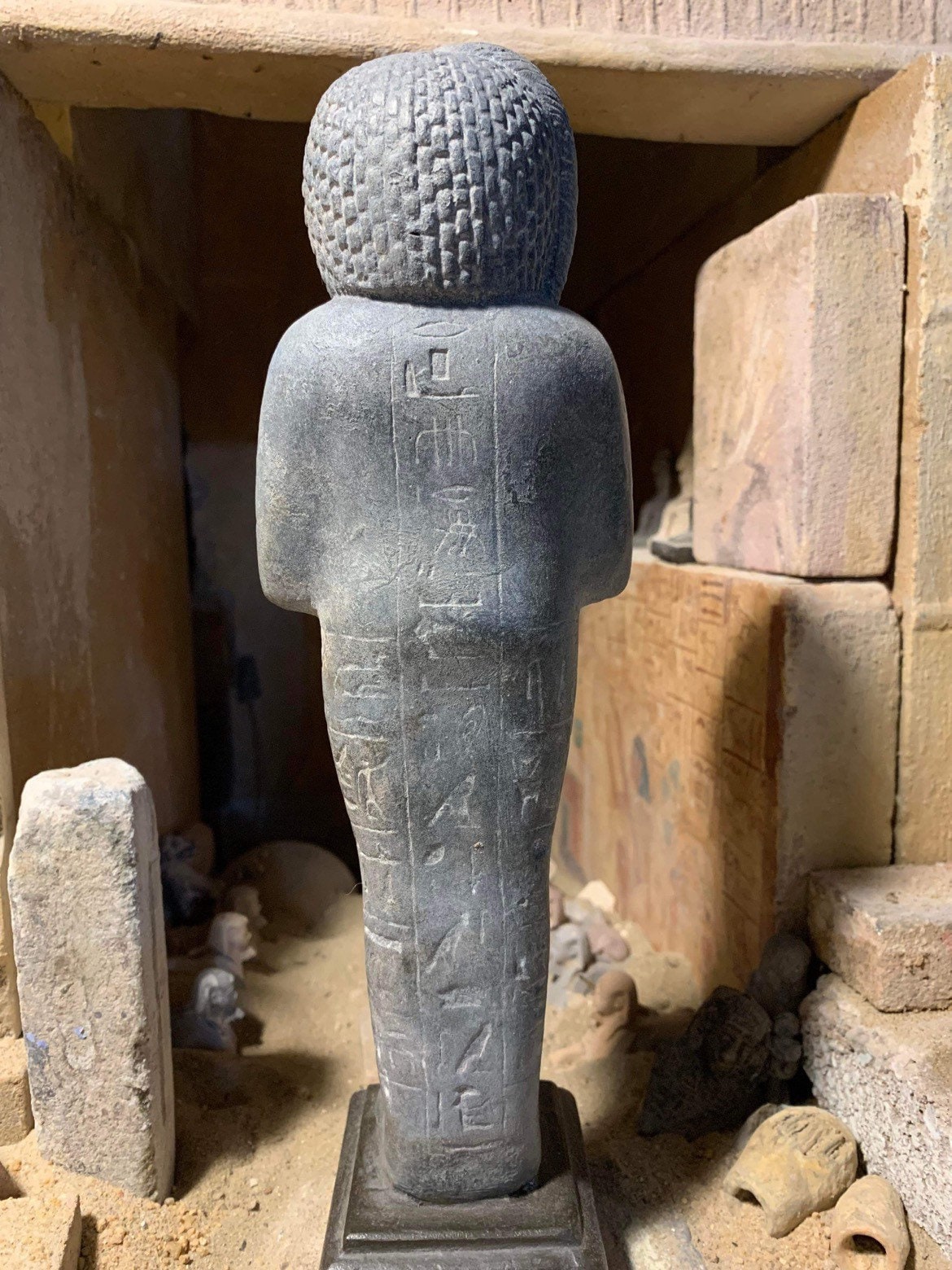 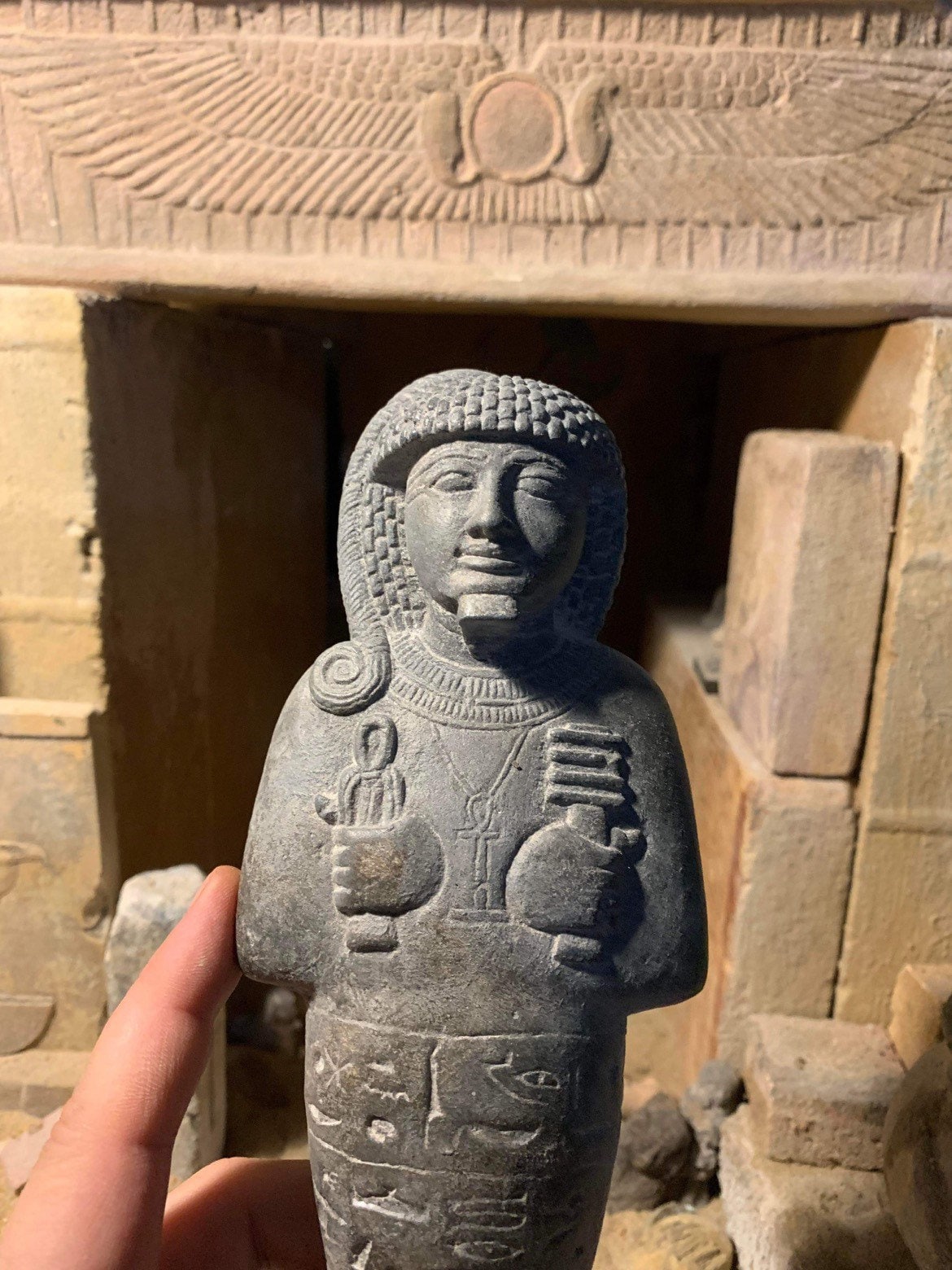 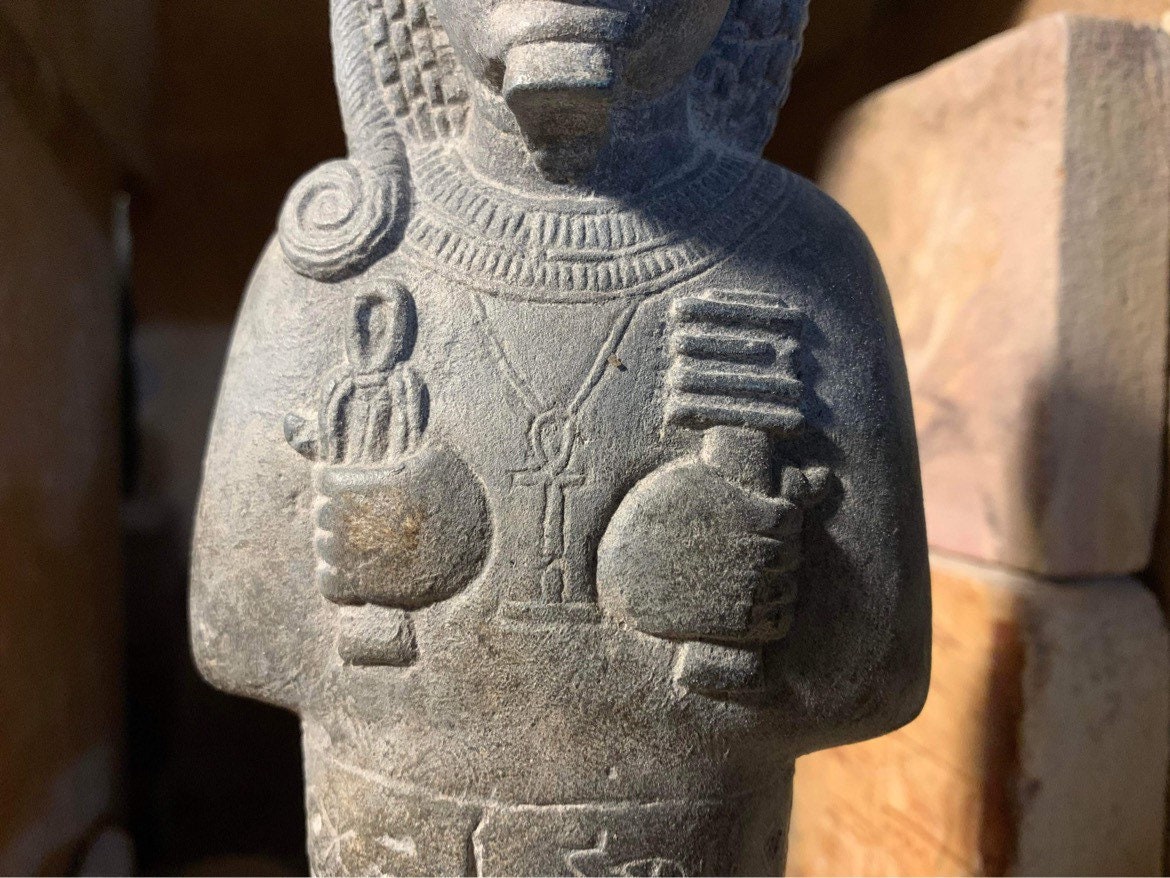 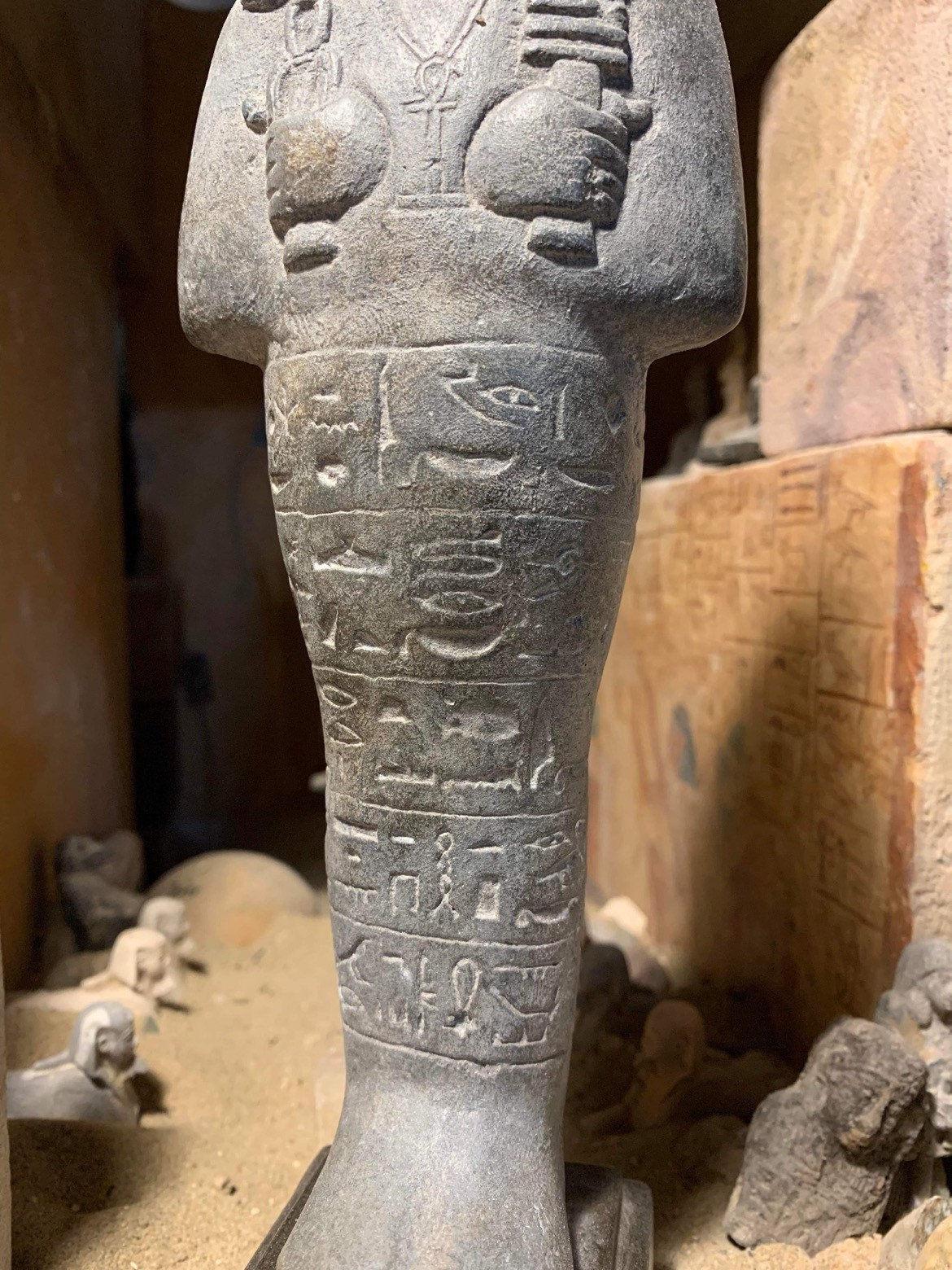 
Made of a limestone and quartzite composition stone this exceptional Ushabti statue has been mounted on a polished, felt based stand. The figure has been given a well developed aged grey / black patina with touches of ochre giving it a realistic ancient look.

Kha-em-waset... On offer here is a replica of a comparatively large Egyptian Ushabti figure. This distinctive 19th dynasty example was commissioned by the crown prince Khaemwaset, son of Rameses the great.

The figure shows the prince wearing a Nubian style wig made popular during the late 18th dynasty and a sidelock of youth cascading down to the right shoulder.

He clasps a Djed pillar amulet of Osiris (symbol of strength - balance / stability) and a magical Tyet knot amulet of Isis.

A necklace is worn that features the Ankh, (symbol of life) that falls neatly between the two aforemetioned amulets. Directly beneath the Ankh is the Hetep glyph which represents peace. Thus a peaceful life is aimed for in this configuration of glyphs.

Khaemwaset was revered hundreds of years after his death as a magician and sage, responsible for the creation of the 'Khamuas magical formula' that first appeared on his Ushabti figures. The spell usually reads as follows:-

"May your face be opened that you see the sun-disk and that you adore the sun in life. May you be summoned to the Roset-au, and circle the mound of Tja-mut, traverse the valley of the upper Roset-au and open the secret cavern. May you take place upon your seat which is in the Tadjeser, like the great crew members on the boat of Ra."

A notable figure during the reign of Ramses, he was actually the crown prince and was in the process of being groomed from an early age by his father for the role of Pharaoh. Evidence has surfaced that he even accompanied his father on the battlefield as a young boy.

The prince took great interest in the already ancient monuments of the Memphite region and is actually known as one of the first archaeologists. He must share this title with Thutmose IV however, who famously removed the sand from the great sphinx in the mid 18th dynasty.

These monuments were already over a thousand years old and Khaemwaset's obvious thirst for knowledge could be enhanced with the rediscovery of old temples and shrines in the Pyramid region of ancient Egypt.

As he matured he took the role of high priest of Ptah in Memphis and was responsible for substantial additions to the underground catacomb known as the serapeum. This is today, a vast labyrinth of burial complexes constructed for the sacred Apis bull which was the earthly incarnation of the creator god Ptah. These bulls were pampered and paraded in festivals for the rest of their lives and in death would be mummified in splendour.

Khaemwaset buried more than one of these bulls and we are very lucky to have an insight into what a surviving intact burial looked like as most were robbed in antiquity.

The first chambers constructed during the era of Khaemwaset were revealed to have been disturbed, with ushabtis scattered over the floor, mixed with broken pottery vases. A wall of packing stones hid the entrance to another chamber that housed the huge sealed sarcophagus and wall decoration.

Ushabtis were placed in a a wall niche and presided over the burial. These Ushabtis were of a similar shape and design to the one on offer which originates from this burial complex.

Sadly Khaemwaset pre-deceased his father denying Egypt of yet another potentially great Pharaoh.