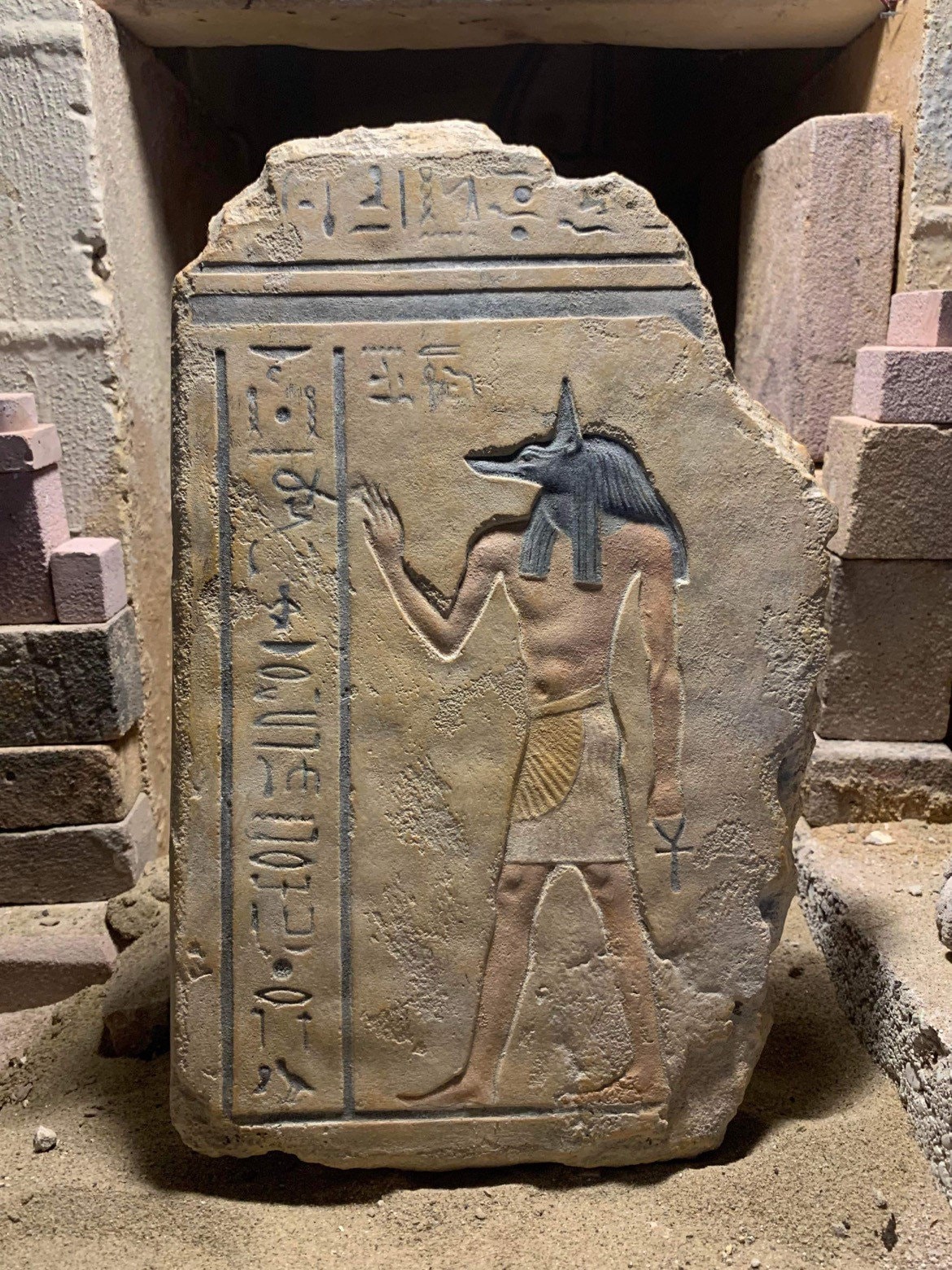 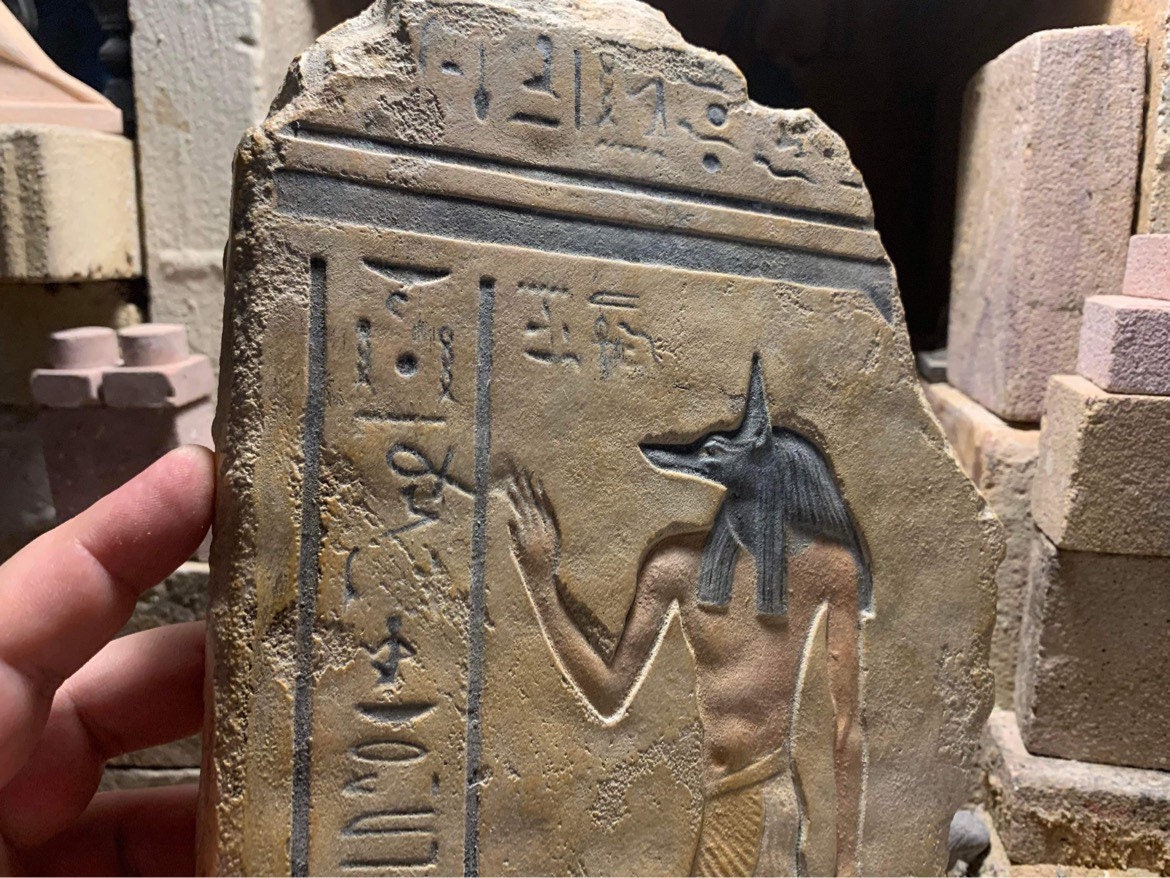 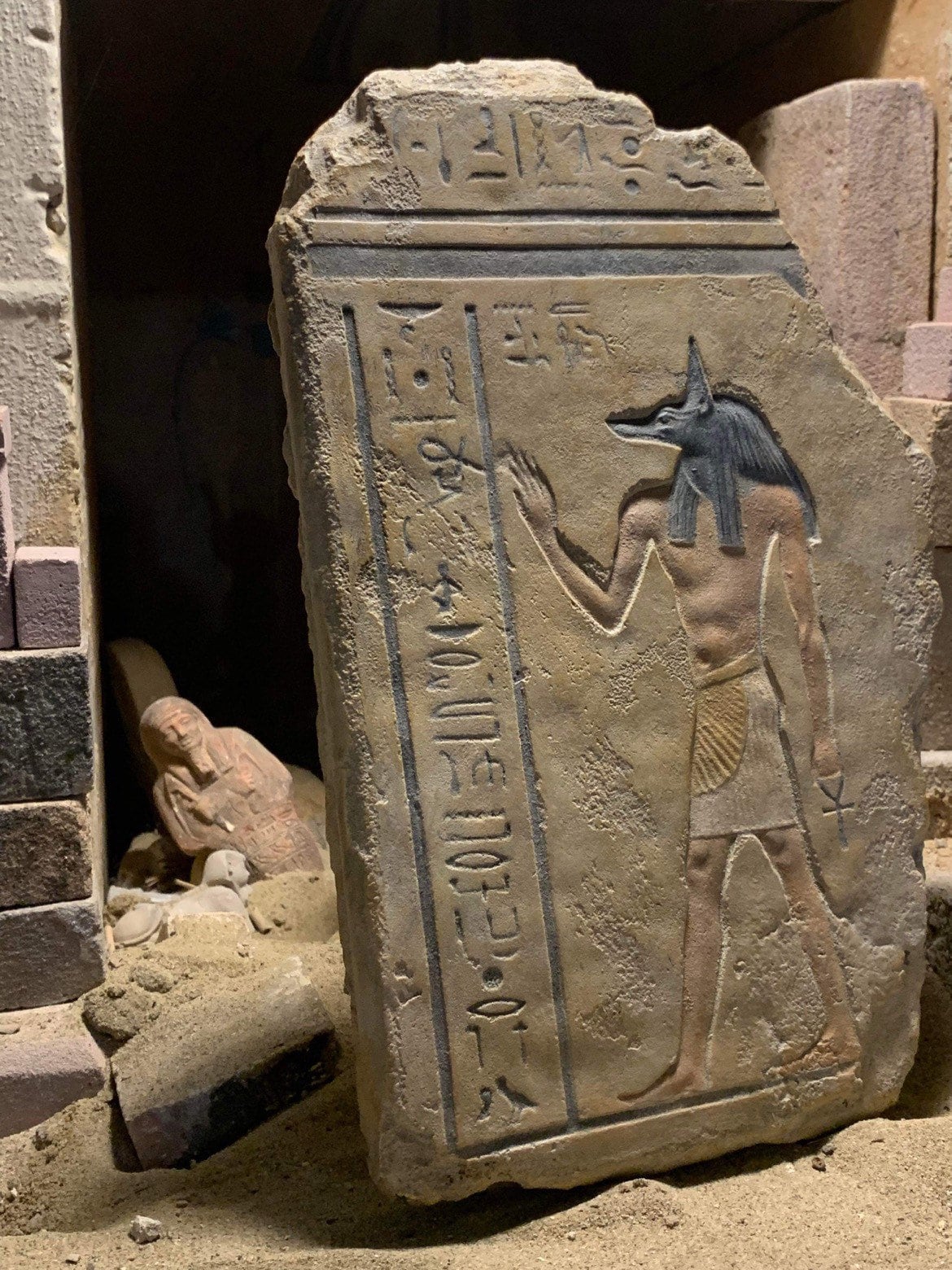 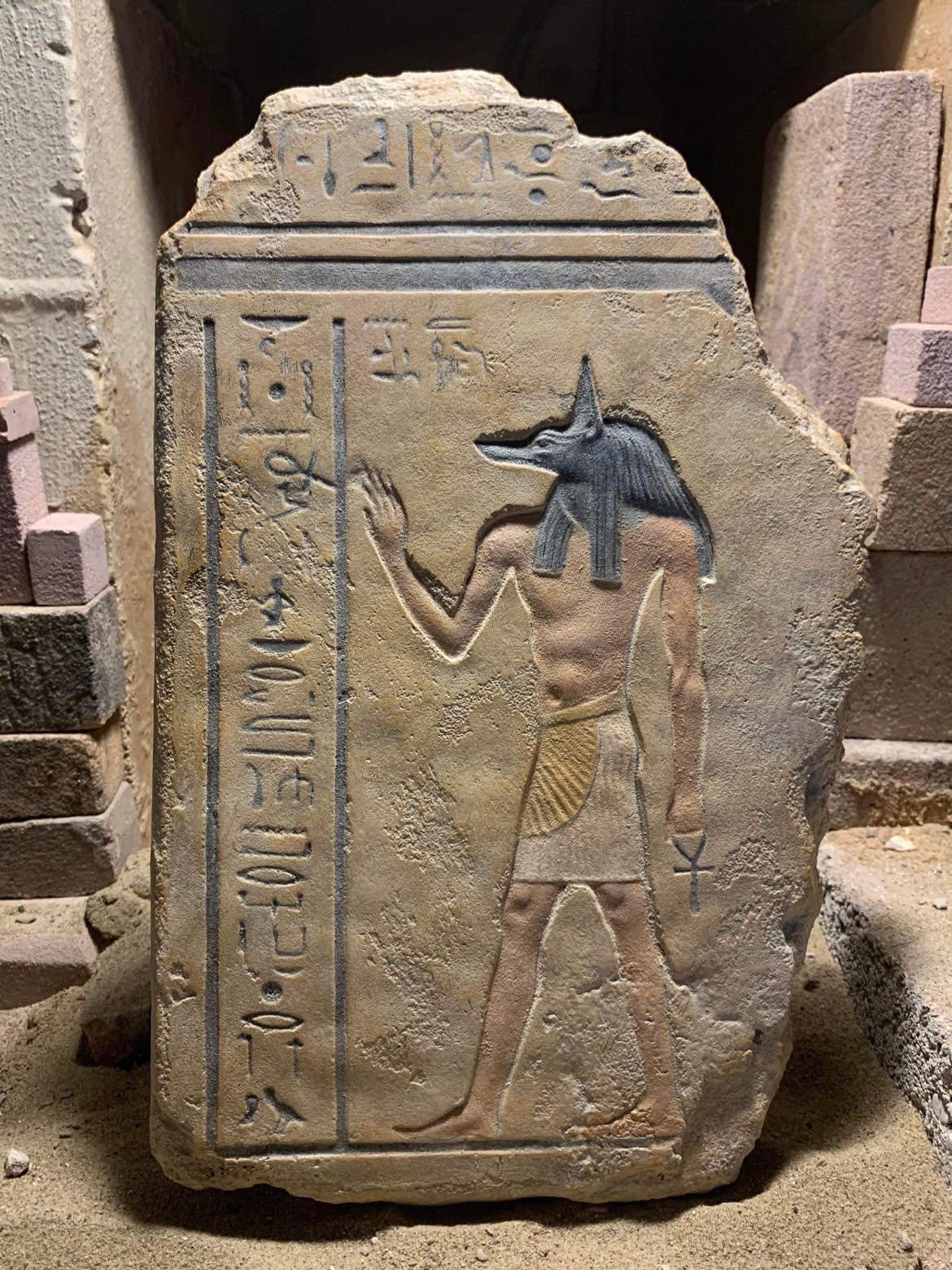 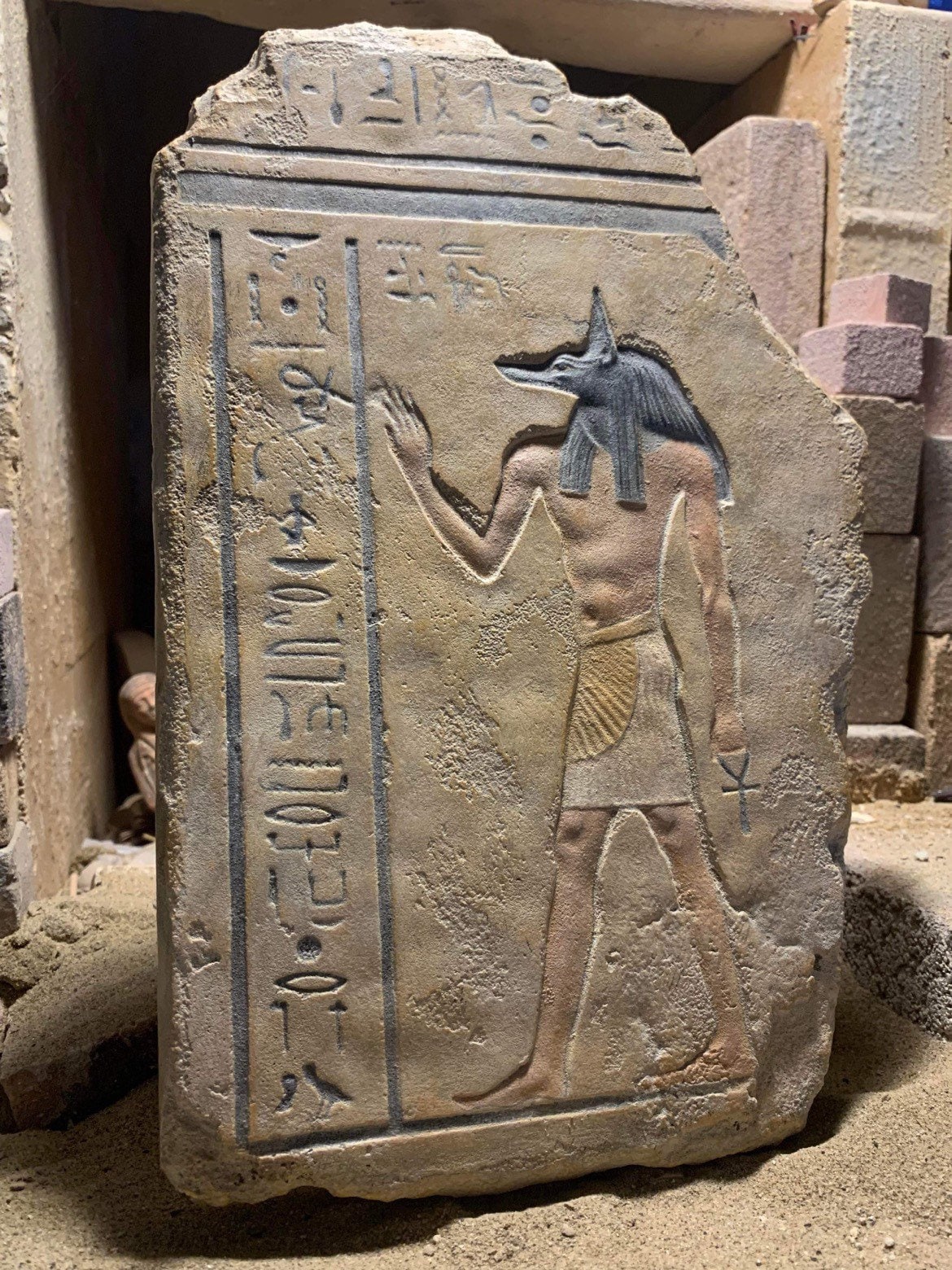 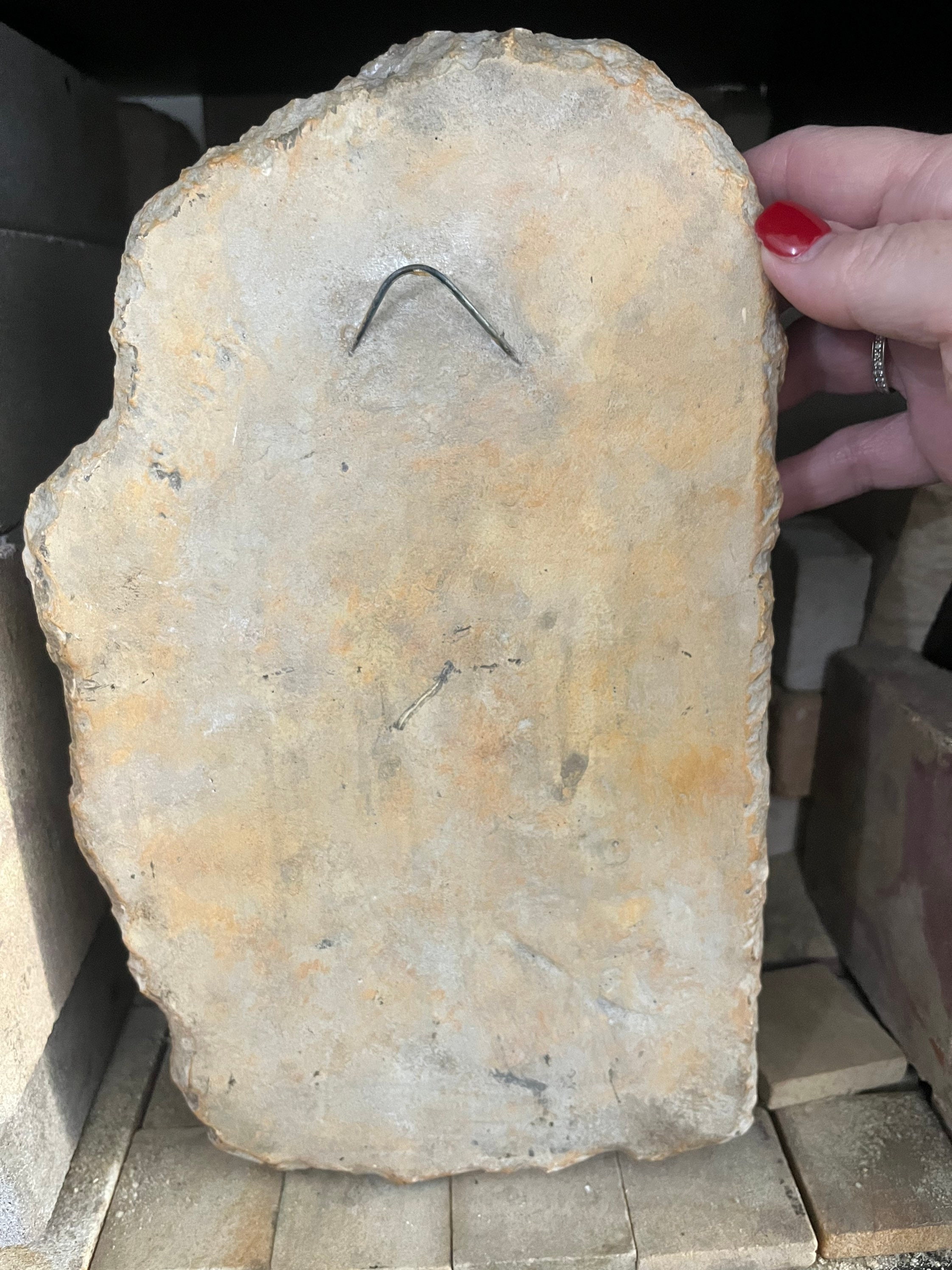 
This is a hand painted replica of an Egyptian Saite period fragment featuring the jackal god of mummification - Anubis. He stands in an elegant pose holding an Ankh amulet in one hand and offering another to an unseen entity.

The Ankh was the symbol of life itself and with the intervention of Anubis in the preparation of a mummy , the continuation of life in the hereafter was given the best chance.

Made of a limestone and quartzite composition stone it has the look of a real fragment with aged, painted details in the limbs, the border lines and the sky hieroglyph above Anubis.

A wire loop located on the back allows for a wall hanging display option.

Anubis Is often one of the 1st gods that become known to people when they are confronted with the complex pantheon of Egyptian gods & goddesses. The striking figure of a Jackals' head with a mans body is a most compelling form. He was said to have made the 1st mummy (Osiris) and was forever to be associated with mummification for all periods of Ancient Egyptian history.

It was often priests who would wear a mask of Anubis to re-enact the role of this essential god in complex rituals to enable the deceased to live again. After the mummy was made, the opening of the mouth ceremony would be performed whereby a variety of amulets such as an adze would be placed on the mouth of the mummy or the mouth of the sealed coffin to symbolize the mouth being opened so that it may breath again. In this scene the god holds one ankh in reserve but strides forward offering another to the unseen deceased. The ankh amulet symbolized life itself and would be offered to the nose thus issuing the breath of life.

This fragment replica is from the Saite period of the 26th dynasty and displays fine attention to musculature and sharp lines incised to create the details. The hieroglyphics and the 'shendyt' kilt that Anubis wears are well defined . The 'Saite period' is so named due the capital city of that time having the name of Sais. It was one of many renaissance periods that would visit Egyptian culture when later generations looked back in awe on an already ancient culture that had existed for more than 1500 years already. The Saite artists felt compelled to do fine work offering usually crisp designs in three dimensional sculpture and relief carvings such as this one.